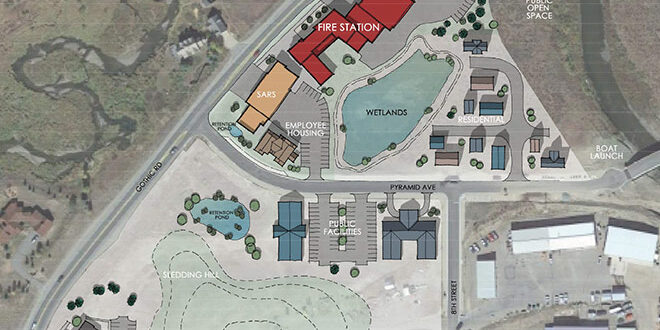 Land will be used for new fire station

The Gunnison County commissioners approved a land use application exemption this week to allow a prominent local ranching family to subdivide a land parcel to sell to the Crested Butte Fire Protection District (CBFPD) so the district can build a new fire station on the property. The Crested Butte Fire Protection District and Spann Family Ranches submitted an application request to the county together and after some discussion during the commissioner’s December 21 meeting, commissioners agreed with county staff that the move was appropriate based on the Gunnison County Land Use Resolution (LUR). Negotiations between Spann Family Ranches and the district had begun almost a year prior to the meeting.

The parcel under review was a 1.8-acre strip of property that is part of a larger 7.8-acre parcel owned by Spann that lies adjacent to the Town of Crested Butte and the Slate River annexation parcels along Highway 135. The requested exemption was based on the parcel being next to an area within town limits that is zoned to allow emergency services and publicly owned housing. It allows Spann and CBFPD to annex the parcel into the Town of Crested Butte and cluster it with the existing Slate River Subdivision. The final clustered parcel will be used as the new central campus for the recently voter-approved (and funded) CBFPD headquarters building, search and rescue building, and employee housing units.

“County staff, district staff, and town staff have discussed this application and process for a number of months,” wrote Gunnison County Community and Economic Development director Cathie Pagano in a memo to commissioners. “I recommend that the Board approve the subdivision exemption request and find that the request is an appropriate use of the subdivision exemption powers granted to the Board. Given that the District will annex the parcel into the Town of Crested Butte and it will be subject to their zoning standards and conditions it is an appropriate decision.”

County commissioner chairperson Jonathan Houck agreed that the exemption seemed fairly straightforward, and invited those involved to speak on the matter. CBFPD board president Jack Dietrich, CBFPD CEO Sean Caffrey and Ken Spann were all in attendance.

Spann spoke of the importance he saw in the project and the reasoning he had for offering to subdivide the family’s parcel to the CBFPD in the first place.

“This is for us, as you probably realize, a very rare opportunity to help the fire department. Because we do not like traditionally to sell land…the selling point for us was the intention of the fire district to build a facility that was commensurate with the needs of the upper valley and that had long term benefits,” said Spann. He said he felt those values were worthwhile for such a small parcel.

“It is actually just a 150-foot strip,” he said, which goes to the centerline of the Slate River to allow for river rescue training. “And I think that’s a valuable point.”

Spann said the only small issue that remains is determining utility corridors, which will happen after the district finalizes its design and the annexation process occurs.

He again emphasized his support for and appreciation of the fire district.

“We don’t sell ground in this county. We haven’t. You have no idea how much we’ve turned down. This is an opportunity, and it is largely due to Jack and his board and Sean and his diligence that this transaction is going forward,” said Spann.

“To highlight your comment, this is a long and durable commitment to the service needed at the north end of the valley. And that is an important marker for you and your family’s name,” said Houck.

Spann said it had meant a lot to his family that Dietrich had said he wanted to build a fire station to last for 150 years.

“And that meant something to us,” stated Spann.

Caffrey said he appreciated the comments, and expressed the CBFPD’s intention to take the next steps of closing the transaction and then beginning the annexation process. The sale price is $550,000 for the 1.88 acres. “This parcel provides us great training opportunities and also helps us with [long-term accessibility] and storage,” Caffrey said, among other benefits.

Commissioner Roland Mason commented on the partnership involved in the various aspects of the project. “These are transformational changes. I think it’s just amazing to see this finalization, especially the partnership with the Spann family and Jack—who has been around since I was a kid…”

Houck said it meant a lot that the whole thing began with people sitting down to have a conversation. “That’s how we do things in this community, and that’s important to remember.”

There were some community members who did not feel there was quite enough conversation, however. Crested Butte resident Glo Cunningham and former county commissioner Jim Starr commented via Zoom that they were disappointed in the lack of public comment allowed during the discussion.

Starr later spoke with the Crested Butte News, and said the change from agricultural use to what he would consider light industrial use warranted more process.

“It seems to me that there should not just be that sort of exemption without public input,” Starr said. The fire district has estimated the new station will be about 31,000 square feet, and the large increase in size has been raised as a concern among some fire district residents.