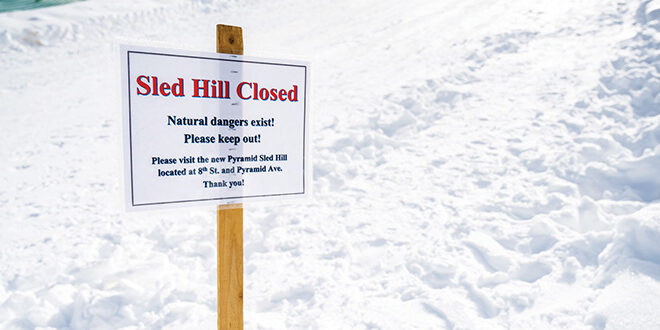 Half the year-round staff positions vacant

Staff shortages in the Crested Butte Parks, Recreation, Open Space and Trails department are putting a crimp on some winter services in town normally done by the employees. The town informed citizens last week that reductions would include reduced hours for Big Mine Ice Rink, a prohibition on sledding at the Big Mine sledding hill, a reduction in chipping ice at the bus stops along with fewer snowbank cut-outs between Elk Avenue and the sidewalk.

Crested Butte Human Resource manager LaDonna Garcia said the staff situation is reflective of many businesses in Crested Butte and while starting salaries have increased in recent years, the reasons for the staff shortage are complex and it’s not all about the money. “Wage increases are a typical response when faced with staffing shortages, and the town has steadily increased wages throughout recent years,” she explained. “However, there are other contributing factors at play. The current unemployment rate continues to drop (4.2 percent in November down from 4.6 percent in October), there are local and statewide housing shortages, and an increase in job seekers wanting remote opportunities. We are and will continue to look at ways to improve recruitment, and retention efforts to address as many of these contributing factors as possible.”

Crested Butte Parks, Recreation, Open Space and Trails director Janna Hansen said a couple of critical parks positions are empty at the moment and it’s not a seasonal problem. Normally, the winter parks crew consists of four full-time year-round employees, one parks supervisor and two part-time evening Zamboni drivers. Right now, the crew has the Zamboni drivers and supervisor, but only two of the four full-time year-round crewmembers.

“In the winter our full-time parks staff provides coverage seven days a week to accommodate rink maintenance and snow removal,” Hansen said. “We typically work four 10-hour days with teams of two full-time staff working each day. This shortage leaves us with just one parks crew member on each day. In the summer months the seasonal staff covers weekends. So, we are really short at the moment.”
When asked why people couldn’t independently use Big Mine Sledding Hill, Hansen said getting it ready for kids takes more work than people think. “The Big Mine Sled Hill requires daily maintenance including upkeep of fencing to keep sledders from sliding into the parking along Third Street, padding of trees (kids tend to remove the pads and use them as sleds), covering rocks and other obstacles with snow and pads, and cleanup of abandoned and broken sleds and other trash,” she said. “CB Nordic has groomed the sled hill for us to help reduce the ice buildup which causes dangerous excessive speeds.

“The Big Mine Sled Hill has been slated for closure since the development of the Big Mine Park Master Plan in 2015,” she continued. “This sled hill poses particular challenges given the run-out is into Crank’s Tank, there are multiple trees and rocks in the run-out area, the space is quite small and does not allow for safe uphill travel. Plus, there is a significant drop-off on the east side onto Third St. The new Pyramid Sled Hill requires much less maintenance and poses far fewer challenges to sledders. With the expansion of the Skate Park slated for 2023, the Big Mine Sled Hill will no longer be viable and we want people to get used to using Pyramid Sled Hill instead.”

Contrary to some common belief, the actual ice rink is not run and maintained by CB Nordic. That organization rents skates and manages the warming house but it is another town amenity. Town crews make the unrefrigerated ice this time of year and then four to six daily resurfacing runs with the Zamboni are required. Hansen said other town ice rink duties include “daily crack-filling due to temperature fluctuations in the ice, managing the on-ice hockey equipment, maintaining and cleaning of the new hockey changing rooms, snow and ice removal under the roof and around the arena, and a multitude of other tasks associated with daily management of an unrefrigerated outdoor ice arena.”

The current plan for reduced hours of operation at the rink is to open at 1 p.m. instead of 10 a.m. She said this allows staff enough time to snow blow one of the two snow blower routes in town (with the other one contracted out to a private company), fill cracks in the ice, and resurface the ice before opening.

As for clearing ice buildup at the bus stops in town, Hansen said the Mountain Express is also short staffed so there is no one else to step up and perform the duties. “The drivers do help by spreading sand at stops, but they do not have staff available to chip ice as often as it builds up,” she said. “Parks personnel will still provide this service, however, they will not have as much time to devote to this task as they have when fully staffed.”

As far as whether the pay is enough to entice workers, Hansen said it seems other issues, such as housing, are playing a big role. The starting salary for the full-time year-round entry-level Parks Maintenance Worker position is $37,500 – $42,700. The total salary range for 2022 is $37,500-$48,200. The town offers on-the-job training and no experience is required to get the job. The Town also offers a substantial benefits package including health, vision, and dental insurance, retirement, paid sick time and vacation leave. She said Crested Butte also has a “robust employee housing program” with 10 employees currently living in town-owned rentals. The starting pay for seasonal parks staff in 2021 was $18-$20/hour.

“Housing is definitely still an issue,” Hansen explained. “We receive weekly calls from out-of-town folks who see our job ad and ask about housing. The Ruby is fully booked with local employees until April when leases will terminate to allow space for Parks seasonal staff. We do not currently have any Parks staff living at the Ruby. I think every industry in the valley is affected by work-force housing and we are no exception.”

When asked if this was the new normal and a sign of things to come in the near and long-term future, Hansen shuddered. “I certainly hope not, but we are living in unprecedented times in so many ways,” she said. “The town has experienced record numbers of visitors despite COVID-19, record staff shortages across all industries, and record sales tax revenue. The Parks crew was short-staffed on the seasonal side this summer, but this has been the case for years, and I anticipate being short-staffed again next summer. Staff shortages are not unique to us, and parks and rec departments across the state have been forced to close facilities and limit hours of operations in this current employment crisis. We struggle with part-time staffing and volunteers to run our recreational programs as well.

“The Public Works and Facilities staff has stepped up to help with snow removal and rink preparation as their schedules allow,” Hansen continued. “The office staff has stepped up to support the Parks crew with crack filling at the rink, rink prep, trash removal, and other duties as schedules allow. We have been intentional about finding ways to reduce services where possible without putting undo strain on existing staff and still maintaining core services expected by our community. All services provided by the parks staff are important and valued and deciding where to reduce services has been challenging. Staff retention is particularly important given the current employment climate, and asking people to work overtime or perform extra duties tends to impact job satisfaction and retention.”

Town voters approved a .5 percent sales tax to be earmarked for the parks department. While you might think that would provide even more money to pay employees a higher wage, Hansen said that dedicated funding covers roughly half of the parks budget. The other half comes from the General Capital Fund and the department typically uses reserves to balance the budget.