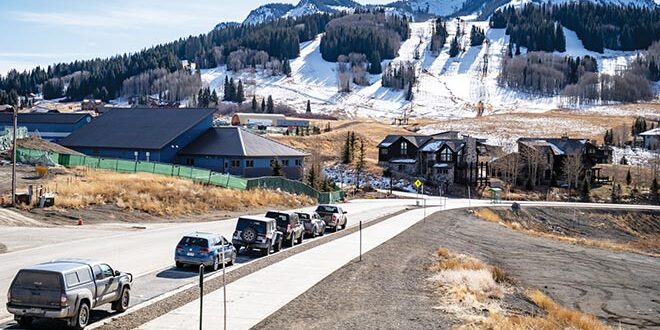 As winter approaches and the Snodgrass Trailhead and Gothic drainage become bustling areas for recreation, backcountry users and Rocky Mountain Biological Laboratory (RMBL) scientists, many have found the town of Mt. Crested Butte’s new Snodgrass parking configuration frustrating. Just as frustrating is the perceived lack of communication from the town about the changes to interested stakeholders.

The new parking area, which was completed in the fall, moved into the town’s right-of-way and off of the North Village property, which is under review for a proposed development. The parking includes 47 spots; 16 of those are parallel parking spots on the west side of Gothic Road, and 31 are pull-in spots on the east side of the road.

“These improvements were made to increase safety for all trailhead users, ease trailhead parking issues, and create a safer turn around for the Mountain Express bus to increase ridership,” explained town manager Isa Reeb. “The Town made the improvements only in the right-of-way in anticipation of any proposed development in the area. The new parking configuration is much more straightforward and safer for users based on industry best practices.”

She further explained, “The improvements to the trailhead have nothing to do with the PUD (planned unit development) review. These improvements were requested by town council and members of our community to increase safety at the trailhead and to no longer have to park in the mud. It’s day-use parking open to everyone, as it has always been,” she said.
The project was funded by a CDOT Revitalizing Main Streets Grant of $150,000, with the town of Mt. Crested Butte providing a grant match, said Reeb. She noted that per the grant requirement to ensure safety, the curb and gutter that has been added was required to function and to protect users of the Rec Path.

“We are not planning to allow overnight parking due to the strain on our staff for snow removal and administration; and because it is inconsistent with the town not allowing overnight parking in other areas,” said Reeb. “I understand this was casually allowed in the past, but there were no formal agreements in place and as the town is building out it is more and more difficult to ensure we can keep our roads clear and parking lots plowed with limited staff. In addition, it’s become a strain on admin and police staff to keep track of who gets permission and who doesn’t and field the questions about why some people are allowed to do it and others are not. We are working to ensure that we are equitable with what is allowed within town right of way and on town property.”

Reeb said that the town notified those that would be impacted by the new parking. “We made sure the public was notified and made an extra effort early on to work with RMBL to make sure their needs were also addressed,” she said. “Regarding the changes, we have received very positive feedback from our community on the new configuration. Further, we have already seen an uptick in parking compliance, which has been a huge stress on the neighbors and police department in the past. We are working with RMBL on their parking needs. Otherwise, we have had one phone call, and we directed them with options. We have not received any letters regarding the matter.”

Stakeholders have a different point of view
However, some in the community have expressed frustrations with the new parking situation, and have shared with the CB News that there has been a distinct lack of communication and response from the town despite attempts to reach out. Representatives of the property where the former parking was located want it made clear that it was not their decision to close the spaces at the base of the Snodgrass Trailhead but a unilateral decision by the town that they were not officially informed about and certainly not a part of.

North Village project manager Crockett Farnell refuted Reeb’s statement that the public was notified about the changes. “There was no consultation,” he said.

“We first read about the changes in the newspaper,” said RMBL executive director Ian Billick. “We have always worked collaboratively with the County, the USFS and the Town, once it was incorporated, to manage the trailhead. For most of our 90+ years a quick phone call and a handshake sufficed; a written agreement would have been inconceivable though that is clearly where things are at.”

In the winter, RMBL has six staff living in Gothic as well as classes, scientists and hut users who stay overnight in Gothic as needed. In addition to people staying in RMBL facilities, billy barr lives permanently in Gothic and there are at least six other families that have cabins they have accessed overnight when the road is closed, said Billick.

RMBL’s new overnight parking, including for users of the hut, will now be in the Fantasy Ranch lot. According to Reeb, “This summer, we facilitated having RMBL park in the RC1 lot and provided multiple parking options for them this winter. Ultimately, they decided to work with Fantasy Ranch to park in the winter because they already have a relationship with CBMBA (Crested Butte Mountain Bike Association).”

“It’s sad to see not just RMBL, but long-term community residents like billy barr and Art Mears, left out,” said Billick. “We are worried about the lack of a permanent solution. Not only do we lack a long-term agreement on Fantasy Ranch, but Town could remove our access to the Fantasy Ranch parking, given how they physically blocked access to private property on the upper parking lot.”

Art Mears, who owns a winterized house on the west side of Avery Peak, also expressed his frustration with the town’s lack of communication. “I wrote two letters to the town and never received any response from the council, the mayor or the staff,” he said. “We’ve probably taken 200 winter trips in our 20 years of having the house. We’ve done this since 1993 and never saw any problems. It seems like this is a solution to a problem that doesn’t exist.”

In a November 9 letter to the town, Mears stated, “We always stay at our house for multiple nights in winter after which we return via skis after a 6-mile ski back to the Snodgrass Trailhead…In the past our vehicle has been waiting for us at the old trailhead. We are asking you for permission to park overnight in winter (or even for multiple nights) at or very near the Snodgrass Trailhead.”

In a letter dated November 24 to mayor Janet Farmer, he continued his concerns and explained that the parking restrictions not only affect the health and safety of him and his wife, but also RMBL and a much larger backcountry-user population.

“I am disappointed that the town would act unilaterally to establish the new parking restrictions without consulting any of the user groups,” he wrote.

Gunnison Forest district ranger Matt McCombs said the parking area was never in his jurisdiction but those that parked there used Forest Service property.

“Like all concerned, we certainly want a workable approach going forward however the district was not included in the discussion to limited overnight use, and I don’t recall this being brought up in STOR committee,” McCombs said. “We’ve now had some initial conversations with the town and county since the policy was adopted.”

Gunnison County public works director Marlene Crosby echoed that sentiment, noting that the changes took place within the town boundaries and not on county land. “I did not know about the no overnight parking until the signs went up and the issue was brought to my attention by our foreman in the CB area,” she explained. “Since then we have had a number of calls. It is totally within the Town of Mt. CB’s jurisdiction. We will continue to plow the main road and make sure we have an adequate turn around. The remainder is going to be plowed by Mt. CB. I reached out to them, but they responded that their crews did not have time to deal with plowing around cars that are parked overnight. I do understand that concern from plowing the parking areas on Kebler.”

“The implementation of the new parking and roadway was initiated unilaterally by the town manager without consultation or even a courtesy,” he said. “We only found out about it when the article appeared in the CB News. We were told by Isa that they didn’t want to allow access to the dirt lots anymore because the dirt tracked on the roadway caused too much work cleaning the road,” he said. He noted that the new parking configuration brings unnecessarily dangerous conditions with folks having to drive up Gothic Road and make a U-turn to access parking on the trail side, or the head-in parking requiring people to unload their gear so close to the roadway.

He continued, “I was also told that when she presented the project to the town council for approval that she told them that she had contacted all affected/adjacent property owners. This was a gross misrepresentation as North Village Associates is the largest and most affected property owner and was never contacted regarding the project.

“Ever since the Alvarez Family purchased the property they have bent over backwards to allow beneficial use of the area to the town for parking, material staging of the Gothic Road improvements and snow storage at no charge to town. North Village Associates would greatly appreciate you clarifying this situation in the paper as we have heard rumors of town staff deflecting criticism by pointing at us. Nothing could be farther from the truth.”

Mt. Crested Butte mayor Janet Farmer said the town council had discussed the Snodgrass parking issue at the Tuesday, December 7 meeting and would be further discussing it in depth at a future meeting as an agenda item.