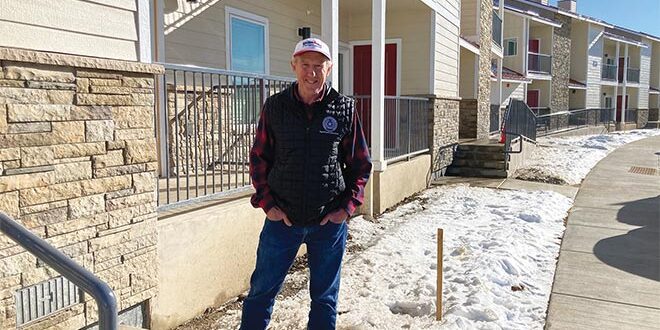 Paintbrush project in Gunnison filling up fast with local workers

Gates sees it as proof he can produce more

As we head into 2022 the largest private-public affordable housing project in the county continues to fill up. The Paintbrush apartment complex in Gunnison is offering 77 units for rent ranging from studios to three-bedroom homes and by the end of December more than half the units should have people living in them.

While not all of the buildings in the complex are completely finished with a Certificate of Occupancy (CO), the project’s developer, second homeowner out of Houston Gary Gates, is confident the apartments will be occupied by the end of January. Gates said 24 units are not yet spoken for but given the lack of affordable housing in Gunnison County at the moment, Gates is not worried about them sitting vacant.
“The number of people contacting our leasing office is more than adequate to handle what we have. We’ve lost many people over the last two months because we couldn’t produce the units fast enough,” he said. “Usually, people need the unit within 15-30 days.”

Because of deed restrictions that came with approval of the project, Gates explained that everyone currently living in Paintbrush is actively employed in Gunnison County at least 125 hours a month.

Five percent of the current residents have incomes near the 200 percent AMI (Area Median Income) level and have high paying jobs at places like Western Colorado University of Gunnison Valley Health. He said 45 percent of current tenants are professionals and earn between 120-180 percent AMI. Another 40 percent are considered “blue collar workers” who make between $15-$20 per hour and earn between 80-100 percent of the AMI. According to the Gunnison County Regional Housing Authority website, 100 percent AMI in Gunnison County for a single person is $55,400 while for a four-person household it is $79,100.

About 80 percent of the tenants work in Gunnison while the remaining 20 percent commute to jobs in Crested Butte or Mt. Crested Butte. Just over a quarter of the renters have at least one child living with them.

Paintbrush filling with South Valley workers
Gates said he is learning that it is unrealistic to think that rental units in Gunnison can handle all the workers from the north end of the valley. “Only 20 percent of our residents work up there,” he said. “Regarding housing workers, I remember one person in opposition to the Brush Creek project said as far as housing workers, ‘that is what Gunnison is for…’ That attitude has been of no help to the North Valley. Crested Butte and Mt. Crested Butte need to resolve their own affordable housing situation by building now. In the four-plus years since I began my journey at Brush Creek, I’ve seen very little multi-family housing being built or adapted in the North Valley other than the hotel conversions that allow some workers to rent vacant hotel rooms. The Ruby is the only other one I know of. In my opinion, it will be at least 3-5 years before anything meaningful is done if a project relies on government funds.”

Gates has made his money primarily by owning rental apartments in Houston, so building a project from scratch in a different environment was not his normal method of obtaining rental units. “I’ve learned a lot about building a quality project fast in the mountains. I have no issues with this deal,” he explained. “Everyone was very pragmatic and the people involved from the County had business experience. I try not to use government funds to finance my projects because I can save years by avoiding grants and government assistance. But this means my proposals have to make business sense, meaning I need a few more units or fewer concessions in order to break even on a project. I’m worried that on future projects, I might be seen as unreasonable when all I’m trying to do is break even. There is no way that I’m doing this for a profit. It is way too much work. If I had accepted government funds, I would probably still be applying for grants.”

As he has in the past, Gates emphasized that because he is an independent businessman who can make decisions on his own, he can provide affordable housing quickly and efficiently. “I feel I can deliver a product (at my cost, with no profit) at under $300 per square foot with no government assistance other than land and have at least 100-plus units ready for move-in in 12-15 months,” he said. “I will probably lose out on future deals because I won’t accept conditions that make little economic sense, like in situations requiring grants from taxpayers to get a project done. That adds years to the project. I am more concerned than ever that I stay away from those deals. This approach creates an “affordable housing industrial complex” that ensures government control. Looking back, I’m glad I held to my pro forma for Brush Creek. It would not have worked at 156 units. I would still jump at the opportunity to do that project but it needs to be at least 180-200 units.”

As for Paintbrush, that took about a year and a half from the start to offering rentals, Gates said about 65 percent of the project used local labor and supplies, which was far more than the required 50 percent. The project took a bit of a hit when local labor became scarce and laying the concrete took two to three times longer than expected. Lumber shortages also slowed down the project.

What’s next?
Gates feels like his Paintbrush success has demonstrated he can pull together a quality affordable housing project. Given that demonstration he wants to do more and doesn’t want to wait to help address what he sees as an increasing workforce housing problem.
Having opened the Paintbrush project, Gates said he “feels confident now that I can deliver a project with basically no more than 10 percent of the units being rented at market prices, 60 percent rented to people making between 80-180 percent of AMI and 30 percent of the units to be rented to people making under 80 percent of AMI. I could meet these standards even while meeting county requirements that renters be either currently employed somewhere in Gunnison County or, if retired, then having been gainfully employed in the County within the last four years.”

Gates said he still has the desire to actively contribute to addressing the region’s workforce housing issue. “My goal was to provide a quality project in record time. I’ve achieved that on this first one,” he said confidently. “The primary factor for increased costs for any project here in Gunnison County is time. Despite the success we’ve had with Paintbrush, I will still feel unsuccessful if I don’t get to do more projects. I always wanted to help solve the housing situation in this area and strongly believe that 77 units is only the beginning. I will not feel that I was successful if I can’t add to this project. The problem is only getting worse. We are losing ground in this community. It’s depressing to see $100-$200 million homes being built in the North Valley but virtually none being built for the working class. Whether if it’s me or someone else, this needs to be addressed. I’m still ready and willing to help.”