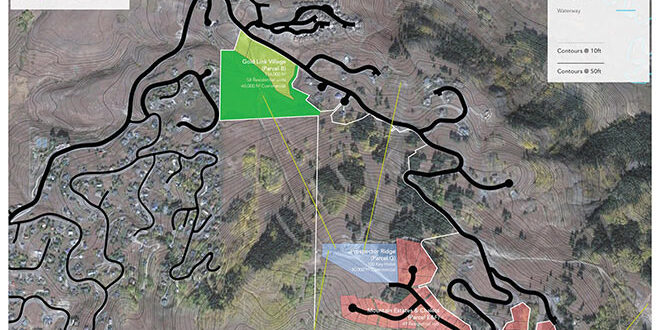 Potential developments to Prospect Subdivision in the pipeline

Another potential large neighborhood development and lodge is in the works on the north end of Mt. Crested Butte, this time with the Prospect Subdivision (located near the Gold Link chairlift). During a work session on November 16, the Mt. Crested Butte town council looked at a concept review for a proposed Planned Unit Development (PUD) major alteration application that would affect four of nine development areas in the East Trade Parcel, also known as the Prospect Subdivision.

According to the applicant’s representation Global Capital Management (GCM) and Aaron Huckstep of Huckstep Law, the PUD is basically the same as what was previously approved with some minor changes.

“We’ve got a development plan that’s been in place for a very long time. These properties have been the subject of design proposal for over 20 years,” said Huckstep. “They’ve gone through a number of iterations with lots of changes to the annexation terms of these properties, but the basics of these parcels haven’t changed much.”

Parcel B would look to optimize ski-in/ski-out access for the residential units, and include a parking garage and small commercial opportunities that could support the ski lift activity and neighborhood. The hope would be to include a bus stop for Mountain Express as well.

Mt. Crested Butte Town manager Isa Reeb noted that in working on the town’s Master Plan, limited commercial space would make sense in the area. “We didn’t get into specifics of numbers yet, but 60,000 square feet would definitely be more than what our initial results have shown,” she said. “The only other place in town where small-scale commercial is contemplated is Parcel B. The base of Gold Link is a good place for commercial.” She estimated that the base area currently includes 240,000 square feet of commercial space (conference and office space) and 95,000 square feet of retail.

Huckstep noted that affordable housing would also be included, but that it had been previously paid in the prior application under different town regulations. He said they would need to work with the town to sort out the details and determine what is sufficient. “We can’t ignore the need for affordable housing with the community itself,” he said. “We aren’t just ignoring that.”

Community development director Carlos Velado added that the affordable housing piece of the plan has not been discussed very deeply yet. “That’s something we’re still working on together. We still have to see where we fall on this piece, but what I’m hearing is even if those obligations don’t exist, they’re still willing to provide some level of community housing in this alteration.”

Parcels E and F will include single family residential lots that are similar to what is currently in Prospect. The roadway would then lead to the lodge on Parcel G. The lodge would include 100 units, which is an increase from 80 units in the previous application.
“It’s the same scale and mass of the structures on that site, just a larger number of hotel rooms,” explained Huckstep. “It’s a much more economical and much more efficient way to run that property.”

Generally, the council reiterated that they would like to see the affordable housing component sorted out, and expressed concerns for the size of the development and whether there is a need for commercial in that part of town.

“I have some discomforts with the massiveness of this project. It just seems like it’s a lot,” said mayor Janet Farmer, noting the number of hotel units and amount of commercial space. “One of the concerns we’ve had about discussing North Village is how many more cars we’re putting on a road that’s not designed to handle this. I don’t know what resolutions there might be for that. I’m personally uncomfortable with how much of this there is.”

“Lots of folks recreate in that area currently, so what does that do for trails access in general to that area for the public?” asked council member Nicholas Kempin.

“One thing that attracted me to the site is that we went there and people were already using it,” said GCM representative Chris Peck. “We’ve already done studies about the existing ski trails and mountain bike trails. We know how to reroute those and have every intention of keeping the flow of activities. We want that to persist if not flourish in that area.”

The team will now prepare a formal PUD application for review. If approved, the goal would be to develop the B, E and F lots over the next two to three years and the hotel over the next five to six years.

“We have a lot of work to do to prepare a full-blown application,” said Huckstep. “We do not plan on sitting on our hands for very long.”