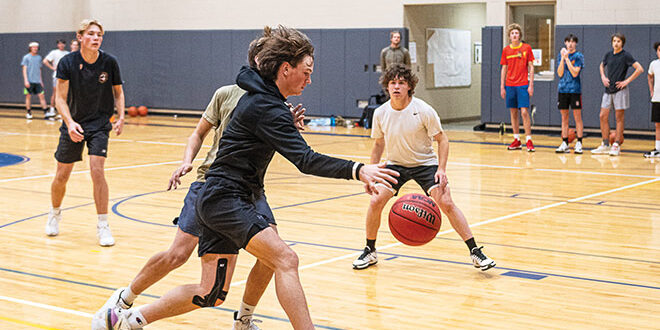 There’s no question the new head coach of the Crested Butte Titans boys basketball team Hannes Gehring is putting his players to the test. And Gehring knows a little bit about putting oneself to the test as a late blooming basketball player and competitive ultra marathoner.

Gehring didn’t start playing basketball until his freshman year of high school but through hard work and determination, developed into a starter at a 6A school in Oregon earning a scholarship to play four years of collegiate basketball.

He also attributes his collegiate career a little to a unique turn of events when he was a senior in high school.

“Kevin Love (five-time NBA all-star who won an NBA title with the Cleveland Cavaliers) was a freshman and college recruiters were coming to the games to watch him and must have noticed me too,” says Gehring.

Once done with college basketball, Gehring admits he was a little burnt out but soon found his destiny in the sport when he started coaching at Kent Denver and eventually moved to Crested Butte and was an assistant coach for the Titans last season.

“I knew in the back of my head I was supposed to coach,” says Gehring. “I feel like this is what I was born to do.”

Former Titans head coach Brandin Hamilton moved at the end of the school year last year and Gehring jumped into the head coach position immediately and went straight to work getting the gym open for optional workouts and stepping up optional workouts in the fall, and the players responded.

“We had really strong optional workouts and we hit the ground running,” says Gehring. “There was interest, commitment and a core group of seniors that kept showing up and committing to the process. The kids embraced that and bought in and we’re that much further along because of it.”

Gehring has a legion of coaches helping out as well with John Mahoney, Tyler Reynolds, former Titan Robbie Holleran, Amy Galley and Mike Bacani all on board with the plan and helping out.

They officially opened the season on Monday, November 15 and Gehring has been pushing the players since day one and they’re all in to the rigorous regimen put before them.

“The focus has been getting everyone in tip top fitness,” says Gehring. “I think we’re in better shape a week into practices than anytime last year and they’re starting to see that.”

But it’s more than just that. Gehring firmly believes he has players that, when they reach a certain fitness level, will be set up for massive success this season.

“They’re uniquely talented and uniquely competitive and I think our fitness level can take us to the next level,” says Gehring.
Gehring intends to start bringing his defensive and offensive schemes into play in the next week with a plan to use high-pressure, high-intensity defense to open the floor up for an explosive offense.

And it’s not just about four or five guys, as Gehring believes he has a deep bench of players that can contribute to the team at any point in any game.

“We have depth,” says Gehring. “We have a fast, quick and competitive bench. I want anyone that’s in the game feeling they’re invincible.”

The players see it too and have developed an all-inclusivity that could be the final key ingredient to success this year.

“They’re unselfish by nature and our best players truly relish in their teammates’ success,” says Gehring. “If and when we win state, it’s going to come down to that.”

But it starts with fitness and Gehring wants to get the team to a level of fitness before the season kicks into gear so the team can then send it into overdrive.

“Hard work truly pays off,” says Gehring. “We want to peak in February when we hit districts, regionals and state. It’s so much sweeter when you put the work in.”

The Titans open the season with two games in Grand Junction and then remain on the road into January. In fact, they only have five home games all season with their first home game not until Friday, January 14.

“We’d like to win state, create excellence and be competitive every year and I think our talent has the potential to do that,” says Gehring.