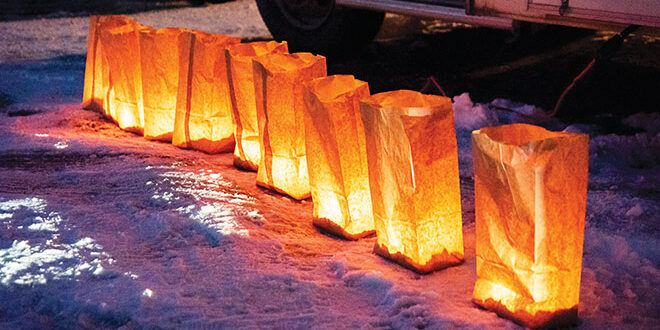 One of the brightest evenings in the valley in 2020 came on the longest night of the year when close to 8,000 luminarias glowed in neighborhoods around both Crested Butte and Gunnison. The organizers of last year’s event hope to repeat that success this year on the Winter Solstice, December 21.

Members of the Gunnison Valley Resiliency Project came up with the idea last year and to say it was a success is an understatement. The original plan was to distribute about 3,000 of the paper lanterns that glow with a tea candle inside but more than double that amount were snatched up as people wanted some light while in the depths of winter and a pandemic.

“Last year we took more than 100 individual orders for 7,200 luminarias,” explained Ginny Baylor of the Resiliency Project. “This year, we don’t need orders. Instead we will be handing out the essentials of the luminarias in Gunnison on Friday, December 3 between 5 and 7 p.m. at IOOF Park during the Night of Lights event and in Crested Butte on Wednesday, December 8 between 3 and 5 p.m. at the Four-way Stop by the Visitors Center.

“We decided to try to streamline the process a bit this year and just offer the one-time pick up locations,” Baylor explained. “Luckily luminarias are extremely easy to craft up and we have the supplies in our valley – so if folks cannot make either time and don’t arrange for someone to pick up some for them, they can very easily (and inexpensively) get the supplies needed to make them.”

The members of the Resiliency Project, Baylor, Maryo Ewell, Faith Saltmarsh, Joellen Fonken and Celeste Helminski look at the effort as a way for the entire community to come together in ‘connection, unity and celebration.’ Baylor said, “We are making a few alterations from what we did last year but have not wavered from our message of building community, connection and celebrating the Gunnison Valley. We hope for bigger and even better as far as participation this year!”

No pre-ordering is needed this year so just show up December 3 or 8 and pick up what you want. The one big change this season is that the luminaria kits will not be coming with sand to weigh down the bags. Participants can use their own sand, some rocks or something like kitty litter to keep the bags open and weighted down so they don’t blow away. Baylor explained that the sand element last year was a collaboration with the Gunnison Parks and Rec department and it complicated the distribution significantly.

“The Parks and Rec staff schlepped (it’s my best adjective for how much “moving” and organizing of sand) over 7,000 pounds of sand! It was quite the undertaking,” Baylor recalled. “We also put together 10-pound plastic bags to accompany each luminaria kit (10 bags and candles). In an effort to eliminate that waste and to cut down our use of plastic we will omit sand this year. We also encountered an issue with the sand being wet from snow when we picked it up, then freezing and adding to weight and lots of broken plastic bags. Maryo actually baked the sand to dry it out…not sure how much she baked, but it is a funny story now. Not so funny at the time…”

This year, the goal is to once again fill neighborhoods with light from 6 to 8 p.m. during the longest night of the year on December 21. “I think last year was a huge success — minus the sand,” she quipped. “It was one of our initiatives that I feel we did a good job of spreading to both the Gunnison and Crested Butte communities. Sometimes we struggle to create events, messaging or initiatives that spread valley wide, but the luminarias brought excitement and light to the entire county. It was magical. It was COVID-conscious. I am surprised weekly by how many folks reach out to make sure we are ‘doing it again.’ We are!”

Baylor’s primary advice for people this year is simple: “Participate. Light your luminarias and invite a friend or friends to take a walk and enjoy them around your neighborhood,” she suggested. “Have a new neighbor or don’t know one very well – heck, best friends even!? Take them a luminaria or two and encourage them to help you light up the neighborhood, and the entire Gunnison Valley.

“With Christmas lights lit and the luminarias glowing,” she concluded, “there is no better time to enjoy an evening winter walk – especially with family, friends or a festive beverage.”

A suggested donation of $1 for four luminarias will help cover the costs. If you have any questions, email Ginny at gbaylor@gunnisonco.gov.