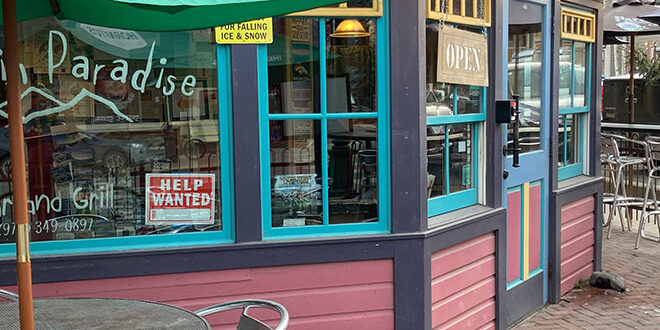 In the next few weeks many businesses along Elk Avenue and surrounding Crested Butte Mountain Resort will be reopening or increasing hours as the “off-season” of late fall gives way to more bustle with the holidays. Despite the ongoing challenge for many industries in the Gunnison Valley in finding workers, the seasonal quest to hire more staff and prepare for ski season has been manageable this year for many restaurants, ski shops and retail businesses in Crested Butte and Mt. Crested Butte.

The usual struggle to find an adequate number and even comfortable cushion of kitchen staff, bussers, cashiers or hosts remains reality for most businesses but a cursory survey of businesses this week indicates that most are ready to welcome winter with open arms and open doors. Some have become adept at working with less, some count the blessings of a strong retention rate and many keep the ‘help wanted’ signs up essentially all year long to keep up with the constant need.

Michael Marchitelli, owner of Marchitelli’s Gourmet Noodle, says he appreciates the robust long-standing staff he has, but says the entry-level positions of dishwashers (divers) and bussers are tougher to fill in recent years.

“I have 21 shifts available currently,” he says. “And we’re always only one bike accident, ski injury, lover’s quarrel away from being short-staffed,” he adds.

Marchitelli believes that the lack of employee housing is cramping the ski bum lifestyle, and by association, businesses.

“We don’t have our ski bums anymore,” he says wistfully. “I love ski bums. I think they’re still out there, but they aren’t here because there’s not enough places for them to live anymore.” He says he believes that increasing the employee housing available locally would help alleviate that problem.

Secret Stash manager Jennifer Suter says the Stash still has a few spots to fill at the front of the house before opening the Red Room downstairs and extending to full-time hours around December 18.

“We’re still looking, especially for the support roles, like bussers and hosts,” she says. “But so many people on staff stick around. More than anything, we’re grateful for that.”

Suter adds that among established staff, they have had to turn away requests for shifts in some cases. “We don’t always have quite as many shifts as people request,” she says.

Elk Avenue Prime and the Wooden Nickel are both hiring for several additions to fill out their staff. The restaurant group’s general manager Ivan Gianni says the majority of applicants are looking for a bartender or server position, but kitchen staff is harder to find.

“We’re always hiring,” he says. The restaurant group uses an independent contractor to hire seasonal international workers as needed, through an essential workers exception to the J1 visa freeze, as does Clark’s Market. But Gianni says he tries to keep that number minimal and focus on finding longer-term employees.

“I want to employ someone who lives here,” he emphasizes. “I really want to get these restaurants back to where people who want to live in CB can live and work in CB.”

One strategy that the restaurant group has taken on is creating their own year-round employee housing. The first step has been winterizing their 13 cabins along the Taylor and East River confluence in Almont, with insulated plumbing and new kitchenettes to be completed within the next week or two.

The group’s corporate executive chef Ian Anderson will occupy one cabin. “And if we find the right full-time candidate in need of housing there will be a cabin available,” says Gianni.

Scarbrough also works at the Club at Crested Butte, which is in partnership with the Burger Company, and says several employees from the Club are working at the Burger Company until the Club opens for the season in about two weeks. “We’re kind of short staffed in both places,” she admits. “I’ve been here since 2018 and this is the first season we don’t have the staff we need.”

Mary Hiteman, owner of Iron Horse Tap in Mt. CB, says she is also looking for more staff. “I do think it’s going to be better than this summer, though, because a lot of our employees work at the ski area so they are up here anyway. But this summer was awful.”

Hiteman hopes to be open seven days per week soon if she can find enough employees. For now, like so many others, she is closed two days per week to adapt to the employee shortage.

“We need more employee housing,” she says. “But of course we all know that.” Hiteman was encouraged that the Grand Lodge has approved long-term rentals, and hopes to see more creative solutions for the workforce.

As far as retail shops, the same story of making things work but always keeping an eye out for more hires is told by most. The exception seems to be ski shops, where maybe the perks of gear and on-snow breaks help retain techs. Butte & Co reports that they do have a few new hires, but didn’t struggle much to find them. The Coffee Lab is also doing well, with new hires but no issues in finding them. Maybe it’s the caffeine perks.

Longtime business owners Trixie Smith and Scott Pfister of Pfister’s Handworks, Pooh’s Corner and Alley Hats say retail has gotten harder over the years as more people find remote jobs. Pfister says while they are always technically hiring, they also adapt by plugging themselves in more.

“It has brought me personally back into the store,” he says from behind the counter at Pfister’s on a Tuesday afternoon. “It’s not like we weren’t here before but now, I am working shifts. I don’t roam as much between stores because I’m on the schedule.”

Smith echoes that they have found a level of comfort with the struggle. “The people we have are really good. And also, we work every day,” she says. “We’re so involved in our stores that we’re going to be here anyway.”

That said, the ability to adapt applies to workers as much as employers. Pfister and Smith do see some people otherwise working remotely who choose to come in to work part-time for a more local connection to place. They also have some high school employees, restaurant workers and ski area employees who get burned out and enjoy the change of pace.