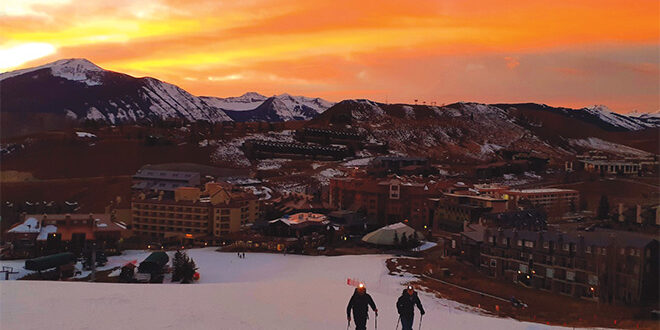 You can feel the growing angst in the early season. It is probably the same at every western ski town right now. The current drought has made for an uneasy opening for the new ski season and people who farm snow for a living – pretty much all of us – walk around looking at the blue sky with a worried smile knowing the medium to long-term phone forecast contains mostly sun icons.

It might be time to jump into the metaverse — that virtual reality world with avatars and commerce being pushed by Facebook — and spend some of my Shiba Inu on some snowy property at the base of a ski hill where the weather is always perfect, the snow always soft and the turns always deep.

But let’s not all give up on our real world just yet. We’ve seen lean starts to winter ski seasons before. I’ve seen the strip in November and into December but by about now the snow guns are blasting all day as the winter temps allow the humps to grow. You could normally see the whales on Upper Park getting ready to be smoothed into an exit from Paradise Bowl. There are no whales on Upper Park. It is supposed to cross 50 degrees this week – in Crested Butte, not Gunnison.

I’ve ridden my bike in the valley in Novembers and Decembers and Januarys. I don’t remember sweating while riding my bike on any trail after Thanksgiving. This past weekend was a ski, bike, outdoor pickleball (insert joke here) kind of weekend. Again, sweating in early fall temps instead of layering up for the mild winter conditions was the difference.

The world famous billy barr posted last week that according to his numbers, new snowfall records are being set and not in a good way. He said the driest September thru November snowfall amount (in Gothic) was the winter of 1976-77 with 81 cm (32”) for that three-month period. That was the infamous “Winter of Un” when locals were dragging snow bits and hay to Warming House Hill for skiers to have something to slide on. Sounds like a metaverse nightmare. So far this year in Gothic, billy reports that there has been 56 cm (22”).

Weather determines today’s high temperature while climate change has an impact on our continued existence as a ski town. According to the Climate Impact Lab the number of days with snow at ski resorts has shrunk significantly the last three decades and that isn’t slowing down. “Within the next 20 years, the number of days at or below freezing in some of the most popular ski towns in the U.S. will decline by weeks or even a month. If global greenhouse gas emissions continue to rise at the same pace that they did in the first decade of this century, ski resorts could see half as many sub-freezing days compared to historical averages by late century.” Sorry kids.

The worry is that the lower elevation resorts will lose any ability to have skiable snow while places like Crested Butte – higher elevation resorts – will be much more limited in a much shorter season. CB fares better than some but no one escapes the impacts.
We all know that ski resorts are carbon heavy, but I don’t know many people living here that are willing to give up what we have. It’s hard to call yourself an environmentalist when you choose to live and work at 9,000 feet above sea level in the (normally) cold Rocky Mountains. Tourists travel hundreds of miles in planes and SUVs to ride chairlifts powered by fossil fuels and stay warm in heated swimming pools before going out to eat at places where everything is imported from around the world by trucks. I don’t call myself an environmentalist. While ski resorts are not centered on an environmentally-friendly economy, the best places do what they can to at least address the reality. Crested Butte and Gunnison County are trying.

CB is looking at a number of measures to mitigate climate impacts as part of its Climate Action Plan. A solar farm is slated for the entrance of town. The county is really good at implementing energy saving measures, such as relying on geothermal systems to heat most of its buildings and designing the new airport terminal with its partners to be a net-zero energy facility with its extensive geothermal and solar measures. And while a single new coal fired power plant in China erases every gain put in place here, you have to try.

Reality is rough these days. No wonder the metaverse is attractive for people who I envision weighing 500 pounds as they slip on the 3-D goggles while sinking into the couch to ski the steeps without getting tired.

Speaking of reality, these are the shortest days and longest nights of the year. The local Resiliency Project is once again bringing some light to the season. They are promoting a valley-wide endeavor to have people put out luminarias on the Winter Solstice, December 21. The paper bags with the tea candles are cheap but powerful. You can pick them up in Gunnison on December 3 and in Crested Butte on December 8. The idea is for everyone to light them on the longest night of the year.

You have to figure that 7,000 luminarias won’t change the weather pattern, but it will enhance a feeling of community so try to take the time to get a few and put them out in the front yard or the deck or the driveway with your neighbors. Last year was a great success and anything we can do to bring more light to the valley this time of year is a good thing.

Anyway, back to impacts of climate. The local absolutists who rail against all tourism and make the argument tourism isn’t needed in the valley may get a taste of their vision if the weather doesn’t change.

Right now, the planes that bring the high spenders here for the ski season are filling up pretty fast. According to the RTA, the holiday air traffic and for most of the rest of the ski season looks “solid.” People are currently booked to come and share the holidays with us. The upcoming reservations for ski rental fittings and even restaurants are significant. And they’ll probably come no matter what to spend holiday family time in the mountains. But I’d guess those people who come here to ski the rest of the season are watching the weather and if there is nothing much more than a strip to ride in 2022, chances are a lot of them will cancel or postpone their trip. We’ll see how many people who rage against tourism actually rage against it when there’s 30 or 50-percent less of it. And while second homeowners and more full-time locals make up a firm economic base in the North Valley these days, tourism brings the gravy and variety. My guess is TAPP would be working overtime to make up for the deficit.

But that is almost a month from now and we have all seen it dump late and change everything — the snow coverage, the open lifts, the general community attitude. As much as I love riding my bike and playing outdoor pickleball (insert another joke here), I prefer skiing Staircase and Funnel in the winter.

These are some trying times. It is dark. It is dry. It is warm when it shouldn’t be. Skiing the new Peachtree lift Monday felt like a late April day. The lift ops needed more sunscreen and a Hawaiian shirt.

It is still early but it is what it is. We can do what we can do. Ski the strip. Do your snow dance to Ullr. Build your next house with geothermal instead of a gas line. Require new developments to be electrified so alternative energy sources can be used for power. Heck, light a luminaria. And let’s see what happens this season — and the seasons to come. Don’t run to the metaverse yet — powder guru Joel Gratz says the signs are looking good for real (not virtual) snow as early as next week! 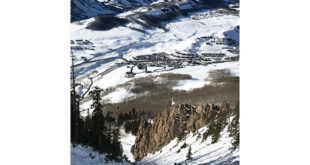