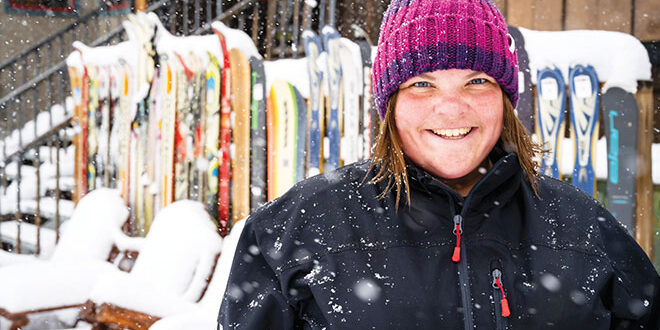 During the summer, Erica Rasmussen’s garden is her little oasis but as the long winter sets in here, her joy turns to all the adventures that deep snows have to offer. Between her relatively new job as executive director of the Crested Butte Snowsports Foundation, life coaching, teaching, a hubby, two toddlers, two huskies and her newly launched business as a marketing consultant, Erica has little time for much else.

Born and raised in Cromwell, Connecticut, her parents were ski instructors in Vermont, slapping skis on Erica as soon as she could walk. “That got into my blood early. My mom was the mountain mascot when she was pregnant with me,” she says, explaining that the mascot was a mouse sponsored by Vermont’s Cabot cheddar cheese. “I filled out the costume well for my mom,” she laughs and points out, “So technically, I was skiing before I was born.”

Growing up, Erica says that she was a good kid and earned excellent grades throughout school. In the summers, she’d be heading to the beach from her grandmother’s home on Long Island Sound but admittedly, it was winters that really excited her much more than summers. In high school and college Erica played softball and volleyball, becoming team captain in both levels. She became a junior ski instructor at the age of 14. It was as a ski instructor at Okemo Resort that she discovered Crested Butte.

She had graduated high school a year early to attend Lyndon State College (now Northern Vermont University), “Way up north in Lyndonville, where you start seeing signs for Canada. It’s called the Northeast Kingdom. It’s actually its own little world.” With her avid love of skiing, Erica focused on ski resort management with a minor in marketing. “College was awesome,” she says. “I had a great community there through playing sports, traveling all over largely New England and the eastern area. I made the most of college, working at Okemo.”

During her sophomore year, Erica began a marketing position with Bretton Woods, a ski resort in New Hampshire that included the historic Mt. Washington Hotel. It became her senior internship for the summer of 2008, and she graduated that December. It was the winter of February ‘08, through Okema’s season pass, that Erica and her dad came to ski the notorious Crested Butte slopes. “I had never skied huge or extreme terrain until I came to CB. I remember riding up the North Face Lift and I had the feeling it was the right place for me. I was thinking to myself, how do I move here, how do I make this home?” she says.

Erica was dreaming of skiing the front of the mountain but, she admits, “It looked really scary. I really wanted to do it, though. I had made my way toward it and turned around because I had never skied anything like that. When I got down to the bottom of the mountain, dad was talking to Charlie Farnan. The next day Charlie paired me with Jen Oberling to show me the extremes and other terrain that I hadn’t seen yet. She’s been a friend of mine ever since.” Later that week, Erica did get to ski the Peel. “When I finally got to ski the front, I was just blown away, how incredible it felt, and how fun it was to ski the steep stuff. I was motivated to get to know more of the mountain. Colorado stole my heart and I knew I had to get back. I remember shedding a tear with CB in the rearview mirror, thinking I didn’t want to go.”

Ski Area Management Magazine named Erica “Recruit of the Year,” which she says is like getting the Heisman Trophy of the ski industry, so she was the top recruit to go into the job market that year. ”I got the opportunity in May 2008 to accept the award in San Francisco and the magazine actually flew me out,” and she spoke before hundreds of ski industry executives. She was immediately offered a job with Snow Monsters in Durango, a national program to promote youth snow sports with 100 ski areas nationwide. She took the job after visiting the town, packed up her Subaru, “And then the market crash of 2008 dampered everything.”

To make it work in the new economy, “I lived in my boss’s backyard in an RV painted like a tiger with detachable ears, because we were the Snow Monsters,” she says of their mascot, Snowball the snow tiger whose portrait was on the RV. “My job was being the program manager to get more youth involved in snow sports.” Erica taught skiing part-time at Purgatory, but she confesses, “My heart was still in Crested Butte. Despite the treacherous drive over Red Mountain Pass, Erica would visit Crested Butte often, usually on weekends to ski.

After two winters of working and living in Durango, she made the move to CB in May of 2010, securing employment with the Gunnison-Crested Butte Tourism Association as marketing coordinator and webmaster. She now serves on its Tourism and Prosperity Partnership board (TAPP). She also taught skiing at CBMR part-time. Although she moved here for the winters, Erica’s first reaction to summer in the valley was, “Holy cow, the summers are incredible!”

She fell in love with her Riverbend neighbor, now hubby, Tom, in the summer of 2011 at a typical neighborhood campfire. She had bought the condo in Riverbend and Tom’s husky, Echo, was always at her home. “So he just eventually moved in too,” she laughs. They married on the mountain in the summer of 2014.

In 2011, CBMR offered her a job on their marketing team as their interactive marketing manager, to help with website and digital marketing. Eventually, Erica led the team as senior marketing manager, prior to the Vail acquisition. She stayed on for an additional year after Vail bought the resort 2018.

With a growing family—son Tommy is 5 and daughter Mary Sue came along in 2018—they moved to north Gunnison in 2019, buying a home and camping in their driveway until they could finish the remodel to make it their own. “What’s cool is that it borders Trampe’s land so we have cows in the spring. It’s a fun place to feel like we live out in the country but so convenient to both ends of the valley.” Like so many others in the valley, Erica planted a COVID garden. “It’s a great project and attempt to live off the land in a small way but my biggest hobby right now is being mom.”

Since leaving the ski area in the fall of 2019, Erica says she’s tried to align her passion and skill set, working briefly at Western Colorado University (WCU) on their marketing team as an interim member. She was also the general manager of the Gunnison Holiday Inn Express. This past year she was communications and development director for The Community Foundation for the Gunnison Valley, until starting as the executive director for the CB Snowsports Foundation in September 2021.

“The mission of that organization really tugged at my heartstrings,” she says of the Snowsports’ position. “It really aligned my passion and skill set, to help the community and get more kids on snow, which is something I care a lot about. We empower youth through snowsports. It’s awesome because snowsports is a half-time role, which enables me to grow my own marketing consulting business,” which she recently launched, called Spark Your Spark (sparkyourspark.com), “Helping businesses ignite their ideas through marketing.”

Erica says the flexibility fits her needs well. “It enables me to be able to drop my kids off at school and be with them during vacation times and be the best mom I can be while still embarking upon a successful career owning my own business and being an integral part of the community that I care so much about.” Erica already has more than a handful of local businesses she works with.

Erica laughs that in her “spare time,” she’s also is a life coach and shares her passion for the Oola lifestyle framework with the community. “Whether it’s talking in front of a group of moms, or teaching an Extended Studies class at Western, I share how people can live differently on purpose through prioritizing what’s most important to them and truly taking action steps toward achieving their goals.” She credits Oola for helping her manage momming, leading a non-profit, being a successful marketing consultant and still having time for hobbies. Oola originates from the word ‘oo-la-la’ and is a lifestyle framework, Erica explains. “Oola is state of awesomeness where one is living a life balanced and growing in the key areas of fitness, finances, family, field, faith, friends and fun. It’s what life feels like when you’re happy, growing and looking forward to what the world has in store for you.”

Both Erica and Tom feel they are encouraging their kids to enjoy all the outdoor activities that Gunnison Valley has to offer. “From skiing to fishing, we try to maximize every season as a family. Our kids are out there ice fishing. We’re working hard and playing hard, you know. It takes grit and determination and a commitment to life balance and teamwork as parents and enjoying every day knowing that some days are going to be super busy and the reality is, we get to raise our family in paradise.”