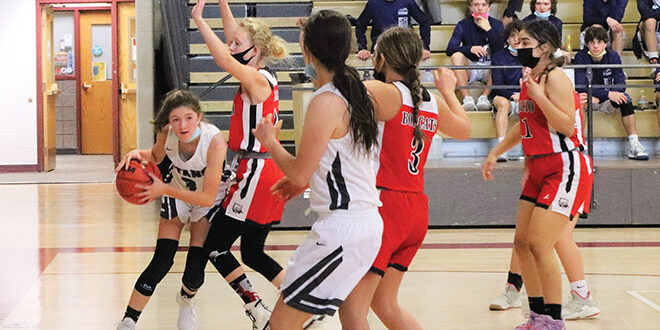 “They did everything I asked of them”

After falling to the Cotopaxi Pirates 36-34 last week, the Crested Butte Titans girls basketball team bounced back on Friday, December 11 to take down the Ridgway Demons 47-27 for their first win of the season. Unfortunately, the Titans fell the very next day to the Ignacio Bobcats.

The Cotopaxi game was a roller coaster of a ride with the Titans building a 20-11 lead by halftime as they shut their minds off and just played the game.

“When they think too much or try too hard, mistakes take over, nerves take over,” says coach Amanda Reynolds.

Cotopaxi came back in the third quarter to outscore the Titans 10-3 but rather than folding under the pressure, Crested Butte continued to battle and the teams finished tied 32-32 and headed into overtime. While Crested Butte remained in the hunt, it came down to just two points as Cotopaxi finished with the 36-34 double overtime win at home. Blakeley Reynolds led the team with 20 points followed by five from Lexi Pickering.

“Games like that are just good for any team to go through,” says Reynolds. “Some of the things they had to face in that game they’ve never seen before. It’s just about time on the court and, collectively, they need to start thinking in terms of, we are the team that comes out on top.”

Crested Butte hit the road again on Friday, December 10 to face Ridgway and after a slow first quarter, the Titans took over for the remainder of the game. They outscored Ridgway 18-5 in the second quarter and then Reynolds starting pulling back in the second half as they cruised to the 47-27 win. While Blakeley led the team again with 25 points, four other scorers posting season-high scoring and Mara Pennie and Hayes Freeman racking up double digit rebounds each.

The Ignacio game was tough for the Titans. While the team was playing well, they lost starter Ellie Duryea to injury in the first quarter. Yet, once again, hard work and grit by the Titans kept Ignacio in check through three quarters of play.

“I felt pretty good about the first two quarters and some of the third quarter as well,” says Reynolds. “We’re just a different team without Ellie.”

Then foul trouble came into play. Three players for Crested Butte fouled out leaving them just five total for the fourth quarter. And while the Titans were able to deal with Ignacio’s press for most of the game, the constant pressure eventually wore the Titans down as Ignacio scored 25 points in the fourth quarter for the 57-18 win. Freeman played every minute of the game to pull down double-digit rebounds again.

“We handled the press, you just can’t beat a press with just five players,” says Reynolds. “We had a lot of turnovers but our girls didn’t quit. They did everything I asked of them. We’re just the team that fights and we have to. We have to fight every single game.”

They have their hands full this weekend with three more non-league games against 3A teams. And while they remain on the road, the games will be just down the road as they play all three in Gunnison. They tip off against Telluride on Friday, December 17 at 7 p.m. and then face Cortez at 10:30 a.m. on Saturday and finish things off with Steamboat at 1:30 p.m. At which point the team heads into the holiday break.

Share
Previous Little Blue US 50 project to take a break for the remainder of winter
Next Profile: Erica Rasmussen