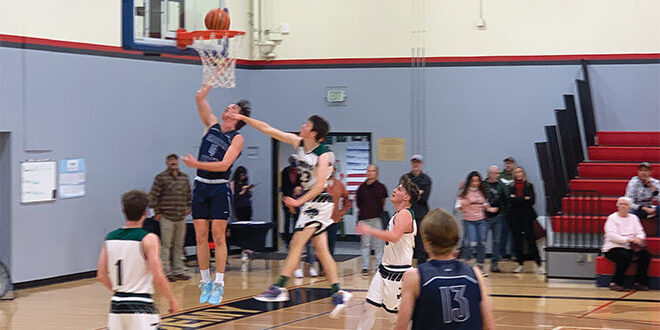 “I was proud they were able to react accordingly”

The Crested Butte Titans boys basketball team opened the 2021-2022 season on the road with a trip to Grand Junction Friday and Saturday, December 3-4 to face Plateau Valley and Caprock Academy. Expectations were high heading into the weekend as the team has quality players that have been working diligently through a rigorous fitness regimen as well as getting offensive and defensive schemes into place.

They opened against the Plateau Valley Pirates and the Titans didn’t come out as hot as they hoped to allowing the Pirates to stay within two points by the end of the first quarter.

“I didn’t like that we came out slow,” says coach Hannes Gehring. “I think part of it was being the first game.”

“I was happy with the way we responded when things weren’t going our way that first quarter,” says Gehring. “The guys didn’t panic. I was proud that we were able to react accordingly. A lot of players stepped up, played well and it was a good team win.”

Excitement was high among the players only to get somewhat dashed the next day as senior Grayson White hurt his ankle during an optional shoot around Saturday leaving him unable to play against Caprock Academy.

“Grayson is just irreplaceable,” says Gehring. “He brings a swagger and confidence to our team.”

The loss of White had a rippling effect on the team as they took the floor against Caprock. The Titans battled to keep it tight through the first quarter but Caprock managed to build a 17-19 lead by halftime.

“We had a lot of guys stepping into roles they weren’t familiar with,” says Gehring.

The coaching staff made some tweaks both offensively and defensively during halftime and after some struggles to open the second half, Crested Butte put together a late quarter run to cut Caprock’s lead down to four points heading into the fourth quarter.

“Caprock played great team defense and we weren’t getting quality looks,” says Gehring. “But we started moving the ball better and made a run.”

Then a spell of cold shooting handcuffed the Titans and while they remained in the hunt the entire fourth quarter, they just couldn’t string enough together to pull ahead and ultimately fell 50-47 to Caprock.

“We had so many good looks that if we had just one or two fall, that would have changed the complexion of the game,” says Gehring. “The experience was really eye-opening for the team and the coaches.”

It looks as if the team may be without White for a while with a series of road games laid out before them this week and into the Christmas break.

“I guess one positive is that it’s early in the season,” says Gehring. “In the meantime, we’ll need some other guys to step up and own their role.”