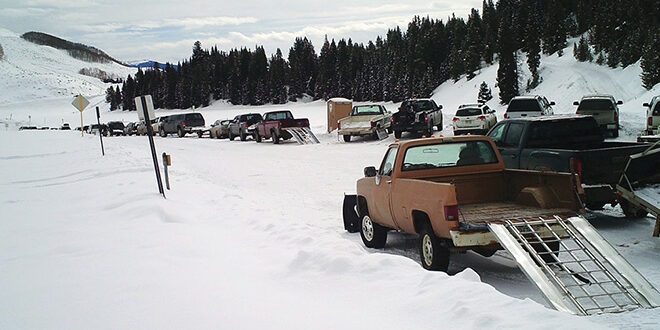 Last winter, more people than ever took advantage of using backcountry trailheads in the North Valley. More than 358 people a day on average hit the trails, a huge jump from 2019-20 when the average daily use was 236 people and the next highest year of 2017-18 when 313 people hit the winter trailheads. The trailheads have been monitored the last four years by Western Colorado University graduate students.

“The drainages around Crested Butte are used a lot,” said Alex Stach, who led last year’s monitoring project. “There was quite a huge increase last season at the trailheads. The majority of the people are locals but there are some, such as people
on snowmobile tours, that are visitors.”

Last year’s data showed that 44,293 recreational visits took place on winter trails in the Upper Gunnison Valley. Kebler Pass was the busiest trailhead with a count of close to 12,000 recreational users. Brush Creek Trail was the least busy area with a count of just 1,542 people.

The Upper Gunnison Valley winter use study was first undertaken in 2017-18. The goal was to gather “quantitative data regarding backcountry travel and use” to help the U.S. Forest Service make decisions in its winter travel management planning that is now more than 20 years old. The study is partially funded by the local Silent Tracks group, the town of Crested Butte and the Crested Butte Land Trust.

The baseline dataset concerning the recreational use of winter trailheads in the upper valley can shed light on what people are already doing in the winter and where. Western’s Center for Public Lands is in charge of conducting the winter data collection initiative and Stach is the lead researcher from both last season and the one coming up.

The initial study installed trail cameras at eight trailhead locations in the North Valley and recorded use between December and April. Last year the season went from December 3 to April 15 and data was collected at eight separate trails: Kebler Pass, Cement Creek, Slate River, Washington Gulch, Snodgrass, Gothic Road and both the Brush Creek Trail and Brush Creek Road.

“Most trailheads have fluctuated in their averages, but a few like Cement Creek and Snodgrass have shown a yearly increase in daily users so are getting busier and busier,” explained Stach. “Snodgrass saw more than 80 users per day last winter (10,100 for the season including 375 fat bikers).

“Kebler Pass trailhead saw over 100 users per day with an average of 102 people per day,” Stach continued. “Around 90 percent of the observed use at Kebler Pass falls into the “motorized” category of our study. And a large number of those motorized users are guided snowmobile trips.

Meanwhile the Slate River and Washington Gulch trailheads recorded less people each year in the “motorized” category, but around the same number of people in the “hybrid” users each year. Stach said hybrid users are people using a motorized form of transportation to access non-motorized access. In other words, they are backcountry skiers/riders using snowmobiles to get out to the goods. “To me this seems like less and less people “just snowmobiling” at these trailheads, and instead most people there are using sleds at these trailheads to backcountry ski and ride.”

Parking at the Slate River trailhead was also monitored and as you might expect, it was at times a cluster. More than 1,000 vehicles were observed over the study’s duration with more than a dozen vehicles clogging the road and parking lot at times. The busiest time of day was 11 a.m.

Surveys were also collected and those indicated that people using the trailheads were primarily local, frequent and experienced backcountry users. With 93 percent of those surveyed said they lived in the county and 60 percent said they had completed at least a level 1 Avalanche Safety Course.

Surveys indicate people take their personal vehicles for convenience and are neutral or in favor of the current winter travel management plans, although most indicated there was room for improvement.

Maureen Hall of Silent Tracks said that, “Silent Tracks is pleased to continue funding Western Colorado University Master of Environmental Management Winter Visitor Use Data Collection. This is an ongoing project and an invaluable un-biased data collection and analysis of the areas around Crested Butte. This data will be instrumental when the GMUG starts the Winter Travel Management process.”