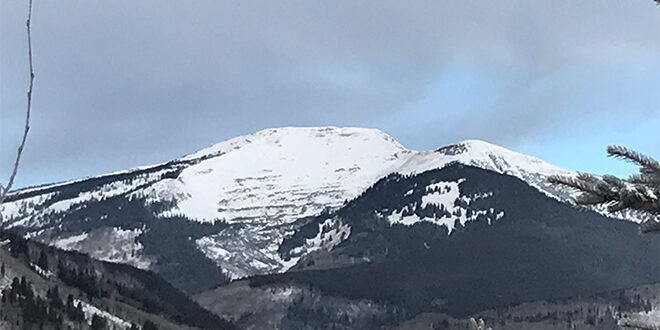 Work continues on officially making Mt. Emmons a place where no active mining is allowed. That outcome will likely include a public-private land transfer and officials involved promised that a robust public process will take place.

In an update to the Crested Butte town council on Monday, December 7, Mt. Emmons Mining Company (MEMC) Remediation Projects manager Dave Gosen and U.S. Forest Service Gunnison district ranger Matt McCombs indicated it appeared the stars are aligning to improve water protection measures for Coal Creek, eliminate commercial extractive mining activities and development from Red Lady/Keystone Mine and establish perpetual recreation access to the upper portions of Red Lady for the local community. Residential development would also be prohibited. Those goals could be achieved but to get there, the plan calls for a land exchange between MEMC and the Forest Service. The hope is that exchange could be accomplished in an expedited process by 2023.

“We expect wall-to-wall public processes,” promised McCombs. “We want radical transparency. The benefits to the public and to the company need to be clear. We will have as much public participation as we possibly can, but the idea is to move forward given the unique alignment of the stakeholders.”

McCombs indicated that the mining company, the Forest Service, Gunnison County, the town of Crested Butte and environmental groups like High Country Conservation Advocates (HCCA) all seemed to be on the same page with accomplishing the stated goals. Given that, he said the idea is to not go through the extensive NEPA (National Environmental Policy Act) process of an Environmental Impact Statement or Environmental Assessment but use a so-called “categorical exclusion.” That is a much less detailed and shorter review process.

Gosen said the company, a wholly owned subsidiary of Freeport McMoran, is on board with the direction of the planning. He said MEMC would benefit from the land exchange that would basically give the company about 550 acres where the water treatment facility and nearby operations are located and the Forest Service would get the Three Peaks Ranch located up Ohio Creek. That, he said, would give the company “operational flexibility” to do things like upgrade the water treatment plant without having to jump through federal hoops because so much of the area is on Forest Service property.

Gosen said while the company couldn’t advocate for a legislative withdrawal of mining on the mountain, “the company would support it.”

MEMC has been looking at ways to make sure the treatment plant remains operational, especially given that the plant was meant to operate for 25 years but is now more than 30 years old. “We are looking at other technologies that can be used to treat the water and also contemplating the construction of a new plant,” Gosen explained, citing a five to seven-year timeline before a new plant would possibly be built.

Gosen showed photos of the results from reclamation work in the area and said MEMC is continuing to make general improvements.

As for the ultimate outcome that includes the land exchange, McCombs more than once emphasized that the public would have a lot of opportunity to weigh in on the proposal. “Basically we feel really good about this,” he said. “With help from MEMC, the Forest Service has the bandwidth to move forward. There are still some things we are wrestling with on the proposal but I have high confidence that people will be pleased with the amount of public process it goes through. I’d stake my reputation on it.”

In response to a question from Gay Austin, Gosen said the company was willing to let unpatented mining claims that contained a unique Iron Fen on the mountain expire.

Gosen said MEMC plans increased public outreach starting in early 2022. People are welcome to direct questions or concerns about public access and the conservation easement to Dara MacDonald at the CB Town Hall as she is in ongoing dialogue with the USFS, MEMC and Gunnison County.