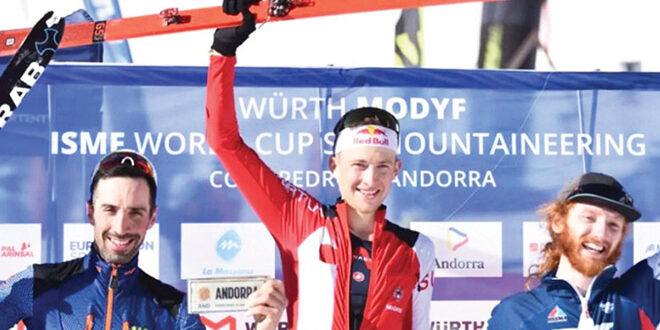 “It was just a magic day”

Ever since ski mountaineer racing, or skimo racing, caught fire in the United States, American athletes have tested the waters of the homeland of skimo, Europe, to see how they stack up.

Slowly but surely, U.S. athletes, including local athletes hailing from Crested Butte and Aspen, have been climbing the ranks in European races. Nina Silitch was the first North American overall to crack the podium winning Gold in the sprint event on the World Cup circuit in 2012 and 2013. Now, Smith is the first man in North America to stand on the senior men’s podium at an ISMF World Cup.

Smith has been to Europe several times before and this year he and fellow Gunnison Valley local Logan Greydanus decided to return and throw themselves back into the World Cup circuit. They headed over to Europe on January 12 to prepare for the second World Cup race of the season in Andorra.

The plan was to jump into the first individual event of the two-day World Cup stop in Andorra on Saturday, January 15 and then line up the following day for the vertical race but neither were able to compete on Saturday and only Smith was able to toe the line on Sunday.

“That was rough missing that first race,” says Smith.

Smith shook off the disappointment and lined up Sunday for the vertical race in the 71st start position out of 72 racers.

“I was about 50 meters back from the front row of starters,” says Smith.

The course is 2,400 vertical feet up the ski resort on a groomed track specifically for the event. Smith compares the amount of uphill in the race to local backcountry climbs.

Starting back in the 71st spot though meant he had a lot of work ahead of him over the course and he made the most of it as he quickly started picking off competitors.

“It was fun to be on attack the whole time,” says Smith. “I knew who a lot of these guys were from following and competing on the World Cup in the past and when I started passing them I felt energized. Next thing I knew I was top 10, then top five.”

Smith continued his steady and speedy cadence and as the course turned onto the final stretch to the finish line, Smith ramped it up once again to pass two more racers going toe-to-toe with an Italian racer and finishing third just a ski tip out of second place.

“I think people were shocked, no doubt,” says Smith. “It was just a magic day. I just had something special. Maybe I was extra motivated because I missed the race the day before and the vertical race is my best event.”

Smith and Greydanus will remain in Europe for another four weeks as they have thrown themselves completely into the World Cup circuit. After some time in France, they head to compete at ISMF World Cup stops in Switzerland and Italy before returning home. And they’re not the only Americans over there as Smith expects to see anywhere from four to eight Americans at any one of the remaining races.

Now that he has stepped on the podium, Smith looks for continued success on the race circuit.

“I showed myself I can be top three,” says Smith. “It gives me a jolt of confidence. I’ll just keep racing hard and see where it goes.”

This season, and the ones to follow, are all part of Smith’s larger goal, the 2026 Winter Olympics in Italy at which skimo racing will debut as an Olympic sport.

“I’m obviously hoping to qualify for that but I don’t just want to go, I want to be competitive,” says Smith.