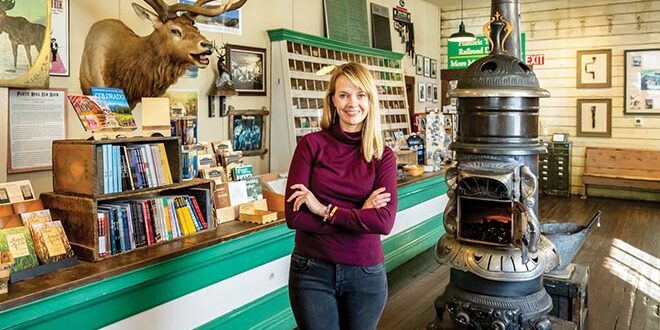 Melinda Hulm’s family history is as vast as the rolling plains of rural South Dakota where she was born and raised. The eldest of five, her parents carried on the cattle ranching traditions that her great-grandfather began on the 1,700 acres he homesteaded outside the town of Bison. “My ancestral grandfather was a wagon wheel maker,” she says of her relatives who were moved from Germany to homestead the Ukraine in the 1700s by Catherine the Great. “My family lived in the Ukraine for a hundred years,” she says, after which, they came to America to homestead.

Growing up on a large cattle ranch is demanding, and all the kids had chores. “It was busy, we spent a lot of time helping with the cattle. Of course, we went to school but before the school bus came we had to tend gates, feed the horses, pigs, sheep, ducks, and all the orphans had to be bottle fed before we could put on our school shoes and make our way to school. I look back now and think, man, my kids have it easy,” she laughs. “The responsibilities we had as kids, it was quite a different lifestyle and then Mother Nature was also full of surprises, just like here. But, as a rancher, she can break your heart but she can also make your day.”

Bison is a small town of 500 people. In all of Melinda’s school there was only a total of 100 kids and 14 in her graduating class. “When you’re in a small, rural school you participate in everything from student council to cheerleading to basketball.” As a cheerleader, Melinda was awarded a trip to Ireland in her senior year. “I went to Dublin for their St. Paddy’s day parade. I had attended a summer cheer camp and was awarded one of only two awards.” It was her first  international travel experience and she was determined to explore the world further.

Melinda attended the University of South Dakota in Vermillion, earning a degree in recreational therapy, a study she read about in a book at Barnes and Noble. She joined a sorority and the university dance squad, performing at sports events. Melinda’s childhood sweetheart Eric was a year ahead of her at the same college when they choose to marry in 1995, the year before she graduated, so all their friends could attend the amazing party they had planned. “It was one of the best parties ever, a massive party in the Black Hills.” Eric’s family also hailed from the Ukraine, and he and Melinda had grown up together, ”Our parents were all really good friends and we grew up having barbeques and parties. We, as kids, would go play and have full reign of our little town,” which she describes as having all dirt roads and no stop lights.

Out of college, the couple moved to Alaska for two years so Eric could get his masters in Geology at the University of Alaska Fairbanks. Melinda was employed at a psychology clinic since her minor was psych. “I’ve always been a helper. I worked with some amazing psychologists and psychiatrists,” she tells, all while coaching cheerleaders, a program she initiated at the university. They moved to Anchorage for a year when Eric got a job with British Petroleum (BP), until they were relocated to London with the company in 1999. “When we had the opportunity to go to London, we were really excited. We knew we wanted to travel and this was going to be our first adventure.” While in London, Melinda worked for a charity called Age Concern, a day center for geriatrics. “We probably celebrated six 100th birthdays,” she says and feels that the lifestyle there was healthier, “They walk everywhere.” She also studied photography at a community college.

By the time the couple was once again relocated, this time to Houston in 2003, Melinda was pregnant with their son, Hugh, who was born that March. Working out of her home studio, she utilized her photography skills there, doing portraits of newborns and siblings and some weddings. Houston was a short stay as BP moved them again, back to Anchorage for five years, where their second son, Elias, was born in 2006 and Melinda continued her photography work.

Melinda and her family were getting the travel adventure they had sought as newlyweds, and BP moved them to Cairo, Egypt in 2011, this time with two kids in tow. ”It was during the Arab Spring and everything was very unsettled. I had a part-time helper who would translate. She was a good cook and a household helper who would come several days a week. Both kids went to an American school with over 60 nationalities, which was a great opportunity to appreciate the different cultures,” she says. Melinda and another BP wife organized a group of moms of all different nationalities who would travel weekly to the only children’s cancer hospital in Cairo. “We’d organize our ladies and we’d take fruit, food, snacks, activities, clothing and games, also items for the staff like cleaning supplies. We purchased TVs for the kids’ rooms. Most kids were from rural locations in Egypt. It was hard but so rewarding, you felt they appreciated everything so much. I loved the people of Egypt, they’re really lovely people.”

But there were scary moments there as well, “You could hear tanks going down the streets. We were supposed to be there four years but we were evacuated in 2013, due to the political disruption because of the coup.” They returned to London where Melinda became part of the PTA and in charge of events, welcome picnics and also very instrumental in  fundraising for the international school as well as organizing a benefit for the British Red Cross. “Whenever I’d move, I felt we needed to embrace the cultures we were living in.”

On the move again after two years, they were suddenly on the North Sea coast of Scotland in Aberdeen. “It was a very wet and soggy three years, all damp, all the time,” Melinda recalls of the drenched country. “The cold we experienced in Aberdeen was bone chilling. We didn’t see the sun for many days,” and yet, she admits they liked it there. “The sand on the beach was like flour but the water was frigid. We’d be in our down coats in May and the locals would go swimming,” she laughs. But they made the best of it and traveled to different regions. “We loved the locals, they’re some of the friendliness and chattiest people you’d ever meet, if you could understand what they were saying.”

It was in the frigid climes of Aberdeen that Melinda first met Crested Butte locals Jason and Brooke MacMillan, where Jason was Hugh’s seventh grade teacher. “I was his classroom mum,” Melinda says of the volunteer position for her son’s class. “Basically, the class mum is the one who sends out event announcements, or organizes student birthday parties, who communicates between the teachers and the parents. Classroom mums are very instrumental in international schools.” Between the PTA and the American Womens’ Associations, Melinda got to know Brooke a bit, “We’d get together monthly and have fundraising for different charities. It was a social support network for women. I knew they were from Colorado but we never spoke about Crested Butte.”

With their visas expiring, and after three years in Scotland, Eric decided he was done with BP, “It had been 20 years and we decided to move on to a new adventure,” which they narrowed down to Colorado because it was close enough to drive to see family in Bison, and a Google search uncovered that Colorado had the best schools, year-round outdoor recreation, and after three years in gloomy Aberdeen, sunshine was high on their list. “It was between Crested Butte, Paonia and Steamboat. We hadn’t been to any of those places.” On Jason’s prompting, the Hulm family decided to visit CB first. The family flew into Denver, rented a car and drove to CB in June of 2018. “When we pulled into town we all agreed this was the place that was going to be our new home. We bought a house two days later. It was just before Vail had announced they were buying CBMR. It was a pretty spectacular bluebird day, green grass and cows,” Melinda recalls, and it felt and smelled like home to her. “We knew right away it was the perfect fit for our family.”

After 20 years of constant work, they took a gap year, “We skied, hiked, got a dog, doing all the CB things. We went on road trips to the lower 48. I got a job as executive assistant at Montanya’s,” where she worked until last May when she was hired as the executive director for the Crested Butte Heritage Museum. “Of all the different non-profits that I worked with, the jobs that I loved the most were the ones that helped the community. I see the museum as a community hub for CB and the Gunnison Valley. It’s a tourist stop, we are the destination on Elk Avenue where everyone comes to when they want to learn more about Crested Butte, or they come in with stories to share, be it about Tony or their grandparents living here. It makes for a very special energy.”

Melinda says it’s her passion and skillset to help build the community and engage with the tourists. “After you’ve moved around so much, it’s hard to find a permanent home in your heart because whereever you go, you make it your home. Here, the people make the community, the various events, the costume changes, the locals – it’s such a beautiful blend of uniqueness. This community thrives on teamwork, it’s how we grew up too. You feel like you have family here because it’s such a beautiful support network.”