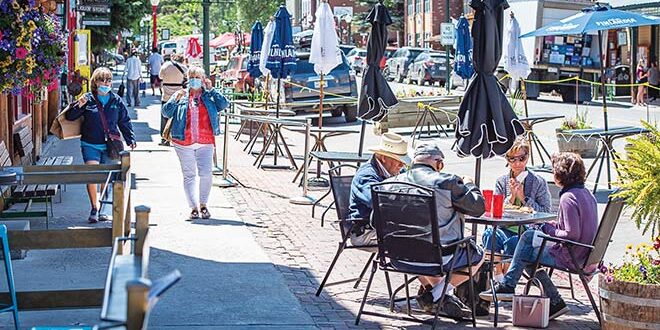 One-way with seating or two-way with no outdoor seating…Funky or junky?

While a decision on what to do with the summer Elk Avenue configuration won’t come from the Crested Butte town council until the January 18 meeting, early indications are that for 2022 it will either be basically the same as this past summer or return to a two-way street but not have any outdoor seating at all. If seating is allowed in the one-way configuration, it is expected to cost restaurants more to participate and permitting will be cleaner and more controlled.

Going with the same configuration as the last two summers would eliminate approximately 20 percent of the parking spaces on Elk Avenue. A separate council discussion will be held on whether to continue with the parking management plan that was started last summer and included permit parking on nearby side streets.

A community survey on the topic garnered 384 responses, which Crested Butte town planner Mel Yemma said was a high response rate for the period the survey was available. Responses were generally split between support and opposition to the one-way idea. She noted that sales tax had increased the last two years when the outdoor seating was allowed.

Community development director Troy Russ told council that when the staff received bids for uniform patios, they ranged from $18,000 to $36,000 each. Given the expectation that 27 patios would be needed, it was estimated patios would cost the town between $487,000 and $972,000. Yemma said there might be some grant money available through the state to offset the costs.

Councilmember Beth Goldstone asked again if there was any way to allow for two bike lanes on Elk in a one-way configuration, but Russ said traffic regulations prohibited that given the available space. She also asked if obtaining patios were a viable option given the timing and cost and Russ said he would be “hesitant to rush into buying patios” given the large investment.

Councilmember Mallika Magner said businesses had told her that they need some certainty with the direction of Elk Avenue if they plan to invest in things like outside tables and chairs.

Mayor Ian Billick asked the council if they should look at a decision for just this summer, for a three-to-five year time period or even longer. He said personally he preferred to set the path that provided for a more bike and pedestrian friendly town no matter what decision was made for the summer of 2022. He saw an opportunity to “really rethink transportation in town especially with changes like the current fire station moving from Third and Maroon in the near future.”

“In his letter to us, Jeff (Hermanson, owner of several Elk Avenue restaurant spaces) asked us to be deliberate,” said councilmember Jason MacMillan. “That is good advice.”

In his brief letter, Hermanson had told the council that, “Outdoor dining is an essential element in placemaking. Clearly, there has been much criticism of its execution on Elk Avenue, and there is much room for improvement. But the underlining benefit should not be eliminated… I encourage you to rely on outside talent who have had good experience with similar challenges.”

Paring down the choices

Councilmembers agreed that the patio option was not feasible for the immediate future and took the idea of pursuing that track for 2022 off the table. That left the old two-way traffic alternative and the one-way parklet option.

“I find it too bad the parklets can’t be done with two-way traffic,” said councilmember Chris Haver. “Our town is a viable, useable downtown and not just for restaurants. My hope was to allow two-way car and bike traffic along with some restaurant seating. We had sidewalk seating previously. It would be great to perhaps test the idea of 8-foot-wide parklets.”

But Russ said given ADA issues, there simply wasn’t enough room for such an alternative within the street when you included space for barriers. He again reiterated that staff is recommending two possibilities if Elk is allowed two-way traffic: 1) no outdoor seating be allowed; or, 2) outdoor seating on eight-foot raised patios. He said 8-foot parklets in the street couldn’t functionally fit with two-way traffic operations.

Goldstone said she saw benefits to using the patios in a two-way traffic configuration but understood staff didn’t feel it was feasible to accomplish this summer.

MacMillan floated the idea of using smaller patios in combination with some of the space along the bricks bordering the street, but staff said the variable curb heights and the fluctuation in bricks from block to block didn’t make that a workable idea.

When asked by Billick if the one-way configuration was reinstated what could be done better, Russ said primarily two things: institute a better and clearer permitting process and raise the price to make sure the spaces were being used for seating and not just wasting space.

While many of the survey respondents said the hodgepodge of different décor looked “junky,” Magner said she understood the concern but considered it more CB funky than junky.

“Part of the junkiness to me was when space was not being used for seating,” said Haver. “It shouldn’t be used for corn hole. A permit should cost enough that it is used for the right purpose.”

Merrill suggested a more standard delineation be used to delineate the parklets, such as a standard wooden fence required of all businesses.

Councilmember Anna Fenerty asked staff to investigate ways for restaurant patrons to walk Elk with liquor. “Do we need to talk open container laws with the parklets?”

Town Manager Dara MacDonald said liquor licenses could extend to outdoor seating or the town could also create an “entertainment district” that allowed people to stroll around with open containers.

Billick said he had heard plenty of people against the one-way configuration “and I understand that, but we also need to balance it with the amount of restaurant service we will have or not have in town. That’s a concern for next summer,” he said.

Goldstone voiced that that discussion was more than just about Elk Avenue. Fenerty said as a pedestrian, the outdoor seating made it hard for her to walk around town. Magner disagreed and said her pedestrian experience was enhanced as a result of the one-way configuration. MacMillan said by turning the town’s main artery into a one-way, it added more traffic to side streets. He wanted some vehicle access allowed to the center of town. “This is a tough one,” he admitted. “It’s a challenge.”

Gallery owner Shaun Horne asked the council to not rush into anything. “I get terrified when I hear we should make all of Elk Avenue a pedestrian restaurant space,” he said. “Think of Elk as its arterial function. People get to Elk Avenue in cars. Don’t close the main artery of town. That would be catastrophic. Sure, make it easier to walk and bike there but don’t make it hard to get to. Maybe take the north or south side of Elk and Third Street and make that pedestrian.

“And there is an equity issue with restaurants and retail,” he continued. “This mainly benefits the restaurants and with the labor issues we are seeing, adding to the crunch by giving them more tables to serve doesn’t make sense. I would encourage the council to simplify. Elk Avenue was not broken before the pandemic. I feel this is a land grab by the restaurants and it isn’t equitable. Don’t put in a golf ball to clog up the town’s main artery.”

Kyleena Falzone of the Secret Stash and Bonez disagreed. She said a ‘Main Street’ was defined as a place of commerce and socializing. “It should be about people and not cars,” she said. “The last 15 days are an example of what we can expect to see in the future and we are packed. But as tired as our staff is they can handle it and keep up with the number of people. If you take away the outdoor seating in the summer, it takes away places for people to go. It takes away the vibrancy of downtown. We don’t have a labor problem at the restaurants. Jeff’s (Hermanson) points are super valid. Please do not take away those 500 seats on Elk Avenue.”

The council will focus on what to do in the coming summer at the next council meeting on January 18 when there will be a public hearing over the issue. No one expects it to be short.