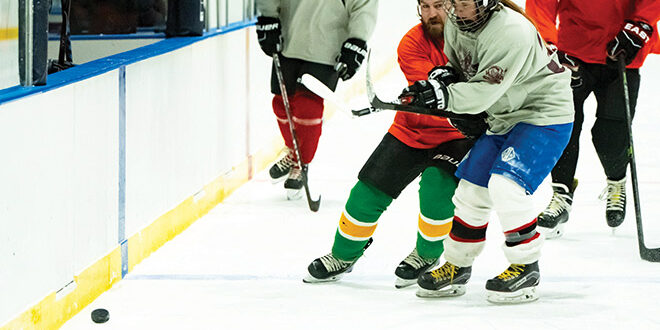 Two weeks into Crested Butte town league hockey and a couple of teams are already asserting themselves as heavy hitters. Not only that, but there a couple of FNGs on the ice as well taking teammates and opponents by surprise.

Thursday night was testament to both of those half-baked statements when the Eldo faced off against Altitude Painting at Big Mine Ice Arena in the late game.

But before I get to the game, I would like to make mention of the Eldo’s crowd. In the season opener last week there were maybe two, possibly three, fans at the game. But Thursday night the Eldo Army (gotta be a better name for their fan base…) was there in force.

And their presence had a direct impact on the game as the Eldo pressed early and when Billy Watson broke loose to go to goal, he left an Altitude Painting defenseman no choice but to hook him to stop him and get called setting the Eldo up for success with a power play.

The Eldo set up in Altitude’s zone on the power play looking for clear shots on net but Altitude Painting player—and one of a handful of Wolverine alumni on the ice—Jake  Sunter picked off a pass and skated the length of the ice to score, stunning both the Eldo and their fans.

The Eldo remained on the power play and that’s when FNG Ethan Jervik stepped into the town league spotlight. If the Internet is true, Jervik played high school hockey for storied Colorado high school hockey program Cheyenne Mountain and was a late addition to the Eldo roster. Jervik’s first shifts were somewhat inconsequential, but he made his mark in the fifth minute of the game as he casually skated through the high slot to pick the upper corner and tie the game.

Both teams had clear looks on net down the stretch of the first period but Altitude goalie Shawn Harrington shut Thomas McLean down and Eldo net minder Lucas McMullan put a stop to Mark Goldberg’s attempt in the final minute to hold the tie.

The Eldo took over in the second period though starting with a blistering wrister from former Wolverine Dakota Wiggins off the post in the opening minute for a 2-1 Eldo lead. Altitude did have their chances immediately following, three of them in fact, but failed to find the back of the net. The Eldo then closed the second period with two goals in the final two minutes when McLean sent Watson up ice with a pass and Watson scored and the two switched roles as McLean scored off an assist from Watson for a 4-1 Eldo lead.

Despite being painted into a corner, Altitude rose up in the third period to keep the game interesting. Goldberg capitalized on the effort of teammate and another former Wolverine Danny Stoneberg in the first minute of the third period.

But the Eldo came back a minute later as Andrea Hellman set up Jervik for his second goal of the game. Sunter pulled Altitude back to within two in the seventh minute, but the Eldo sealed the deal soon after as Hellman set up Watson with a pass and Watson picked the upper corner for the 6-3 Eldo win.