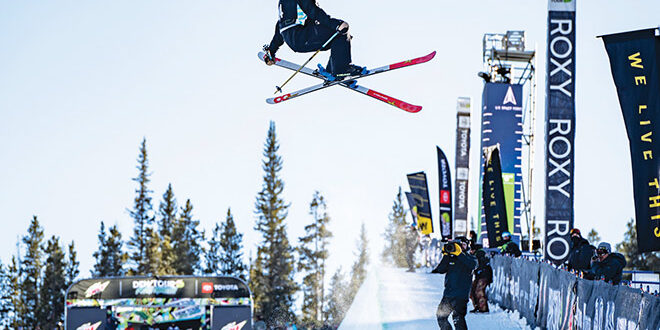 Third trip to the big show

Aaron Blunck closed out the Olympic qualifier series with a third place finish at the Toyota U.S. Grand Prix at Mammoth Mountain, California January 6-9. It was Blunck’s third podium out of the five qualifier events and it was the icing on the Olympic cake as he is headed to China in February for his third trip to the Winter Olympics.

“I’m very stoked,” says Blunck. “Probably the most stoked I’ve ever been for the Olympics. This one feels quite a bit different, a lot more fun.”

Blunck started the qualifier series off on top when he won the opening event, the U.S. Grand Prix in Aspen, last March. He suffered a blow to his Olympic team bid at the second event in early December when he crashed and ended up in 10th place but came back a week later to place second at the third qualifier event, the Dew Tour at Copper Mountain December 15-19.

With two podiums in the first three events, things were looking good for Blunck but there were still two more qualifier events to go before the team was named.

This is when Blunck made a clutch move. In past years, Blunck would ski through fatigue and nagging injuries to compete in events. This year, Blunck opted to stay home rather than travel to Calgary, Canada for the fourth qualifier, the Calgary Snow Rodeo, the first weekend of 2022.

“I had talked to my coaches and they were at ease about my not going to Calgary,” says Blunck. “It was different to sit and watch an event from home and not feel like I was missing something.”

In the end, when another athlete was unable to compete in Calgary, Blunck’s two podiums and FIS points were enough to secure his spot on the Olympic team. Still, there was one more qualifier event on the schedule, the Toyota Grand Prix at Mammoth and Blunck packed up his dog and his van and headed to California to compete.

“When I got to Mammoth my coaches were like, whatever you do, don’t get hurt,” says Blunck. “Are you kidding me? I get hurt walking in my house.”

Blunck kept that in mind and decided to use the Mammoth event as an opportunity to enjoy halfpipe skiing as well as to rid himself of a grudge he’s had with Mammoth.

“Ultimately, I used Mammoth to find the love of halfpipe skiing again, there’s been so many ups and downs in it the past three or four years,” says Blunck. “Also, I’ve always had a grudge against Mammoth, mostly because of the weather there. I needed to find the love for Mammoth.”

Once again, the athletes were met with howling winds so their first practice day was cancelled. Rather than hang in his van, Blunck called up a local he knew to go ski the mountain and clear his head.

“The mountain is absolutely insane and that one day turned everything around,” says Blunck.

The next day it was sunny skies and 55-degrees out when it was time to drop into the halfpipe to practice and that too turned the tide for Blunck.

“It was a classic California day that everyone dreams about,” explains Blunck. “I found that love for halfpipe skiing that I had as a little kid.”

The winds kicked up again during qualifiers but Blunck kept it safe to reach the finals and when they were delayed a day, he went in remembering to stay healthy but couldn’t help himself from pushing it just enough to finish on the podium in third place.

He now has his sights set on one last event before the Olympics, the X Games in Aspen January 21-23. He will keep his van lifestyle going to stay healthy and plans to use X Games as an opportunity to give back to the event.

“I’m going into X Games to give the fans, the employees and the staff respect for everything they’ve done for us,” says Blunck. “It’s the one event that got all of us where we are today.”

A couple days after that, he’s off to training camp with the U.S. team and then off to China for his third Olympic Games.

“This Olympics are for myself and everyone that has supported me,” says Blunck. “People who see me as Aaron, just a kid who’s a die-hard skier. Three Olympics by age 25 is cool but I am just a skier.”