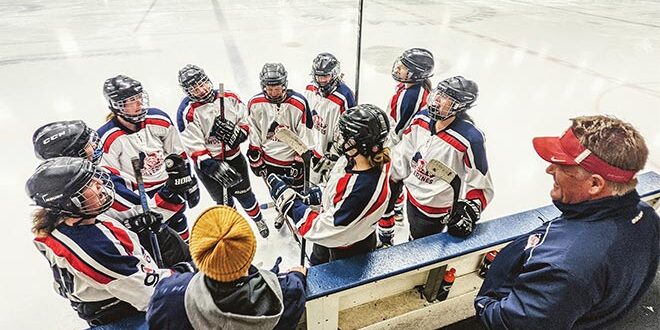 Only four home games of the season

The West Elk Hockey Association (WEHA) u19 girls Wolverines hockey team has their only four home games of the season this Saturday and Sunday, January 22-23.

Alex Stefan and Hannah Valian coach the Wolverines this year with John Collins helping out as well. Valian is a homegrown Crested Butte hockey player. She was one of the only girls playing when she started at age nine and had coaches GJ Santelli and Bob Piccaro during her formative years. She eventually went on to play AA and AAA hockey on the Front Range in high school and played a year of DIII collegiate hockey as well for the CU Boulder club team. After a seven-year stint away from Colorado and hockey, she’s back at it in the valley.

“It’s been great to be back in the valley coaching and playing hockey where my career first began,” says Valian. “Hopefully, we can help inspire more young girls to get out on the ice.”

Stefan’s hockey story is extensive and started in Sydney, Australia. Inspired by the movie The Mighty Ducks, Stefan, much like Valian, played with the boys’ teams until age 16 including on the New South Wales state team. At age 16 she made the Australian Women’s national team playing goalie for them for 10 years and played for the women’s professional hockey team the Sydney Sirens. Valian pulled her into coaching the Wolverines this year.

“Hannah asked me to help coach and I jumped at the chance,” says Stefan. “They’re an incredible bunch of girls.”

The Wolverines are currently sitting in fourth place in the CGHL league with a record of 3-5-5 with two wins coming against the Summit Lightning and another win against the Durango Demons and several hard fought ties.

“This season has gone well. We’ve struggled to keep our bench full as we have a very short roster and everyone seems to have battled illness at some point this season,” says Valian. “There’s a lot of talent on this team and it’s been really fun to see them progress.”

“I am so proud of this group of girls and the integrity they’ve shown,” adds Stefan. “Some games we’ve had only one or two subs and they never give up.”

But all of that has been hard work on the road and for the first and only time all season, the Wolverines are playing at home this weekend. They open the four-game home stand on Saturday, January 22 when they face the Lightning at 8:30 a.m. on the indoor rink. They follow that up later on Saturday when they play the Colorado 14ers at 1:30 p.m. on the outdoor rink.

The Wolverines then have their hands full on Sunday, January 23 as they face the top two teams in the league. They kick off the day at 10 a.m. on the indoor rink against Steamboat Springs who are sitting in second place with a record of 7-1-3. They follow that with a game against the league-leading Aspen Leafs at 3 p.m. on the outdoor rink.

“Hopefully we have all of our players, they’re really starting to gel,” says Stefan. “I think we can really take it to these teams. I’m excited to see what our girls come up with.”