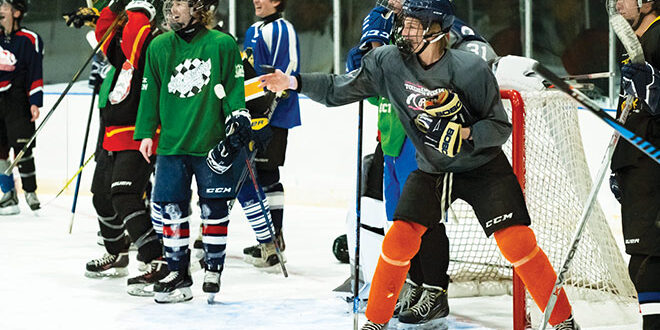 I’ve said it before and I’ll say it again, the annual Alumni hockey game is part of a dwindling list of classic local events. I put it up there with Flauschink, Vinotok and Jingles’ birthday. Fact is, it’s a quality gathering of local families and friends during the holiday season, a chance to catch up.

Last year the Alumni pulled out a 6-5 win over the Titans high school team thanks in large part to a slew of recent grads who were still a bit fresh from their collegiate club hockey playing.

This year, on December 29, some of the Alumni hot shots were missing but the Alumni team was far from short-staffed on their bench as they had a full stack of players, some of who are still playing. It was a roster that included three Collins, two Hensleys, two Barretts, a Stoneberg, a Mabry, a Trujillo, a Piccaro, a Myers, a Gunderson, a Stock, a Marshall and Shaughn Rourke in net, to name a few.

And, as is always the case, the Alumni came out firing matching the pace of their younger opponents as the consumption of adult beverages had yet to take hold and the excitement to play hockey with old friends carried them to a 1-0 lead in the fourth minute when Chris Myers punched the puck through.

Rourke was on point early on in net for the Alumni as he shut down an open look from Titans’ assistant coach Shane McGuinness and Alumni player Sully Marshall cleared the puck from in front of an open net.

Three minutes later, Titans’ head coach Billy Watson put the high school team up 2-1 but the Alumni closed out the period tying the game 2-2 when Jack Collins scored and some big defense from Aiden Gunderson at the end of the period kept the game tight.

The high school players appeared to shake off whatever intimidation there may have been facing the Alumni while the Alumni brought a different mindset to the second period. As a result, the high schoolers and their coaching staff jumped at the opportunity to build a two-goal advantage in the first eight minutes as Sam Dukeman found the back of the net to get the Titans team going and McGuinness tacked on a fourth goal for a 4-2 Titans’ lead.

The Alumni, several of whom were using skates in dire need of a sharpening, continued to struggle as they shuttled players in and out of action while their coaching staff increased throughout the game with everyone offering opinions as to the keys to success as well as sharing their thoughts of the high school players.

The opportunities they did get were shut down by Titans’ netminder Jack Perkins and the high school team continued to build on their lead in the third period as Brendan Hartigan scored four minutes into the final period for a 5-2 lead.

But the Alumni had been here before, almost one year ago to the day, down 5-2 in the third period. Sure, Watson netted another goal for a 6-2 Titans’ lead but there was still 11 minutes left on the clock and it being the Alumni hockey game, anything is possible.

The Alumni pressed, playing without concern and looking for the heroic comeback but Perkins made some key stops to stem the initial attack. Collins finally broke through for another goal and hopes were high that this could be a repeat of last year. But with a running clock, talk among the Alumni of where they were going after the game and the Titans’ team maintaining composure and organized play, cooler heads prevailed. Joseph Stock did give the Alumni the last word as he scored in the final two minutes but the high schoolers had done the job and avenged the loss from a year ago to hold on for the 6-4 win. 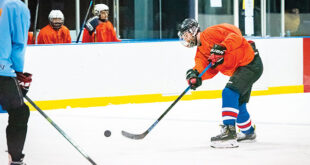