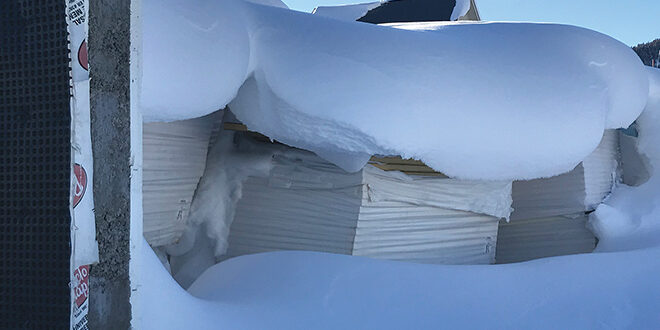 Developer in default of contract, Mt. CB has hired an attorney

The long-awaited Homestead affordable housing project in Mt. Crested Butte has hit multiple snags in the past couple years, from COVID to construction delays, the latest snag being that the developer has not renewed the contract with each of the contract holders who had expected being moved in to their respective units by now. With little to no communication from the developer, the rest of the involved parties – including the contract holders, the transaction broker serving as the liaison and the Town of Mt. Crested Butte – have been left frustrated and uncertain on where the project stands.

In November, each of the Homestead contract owners of the 22 units were notified that the developer, Lance Windell of Homestead Housing, LLC, had not signed the contract extension, putting him in default of the contract. According to Homestead’s transaction broker Gary Huresky of LIV Sotheby’s International Realty, Windell said he wanted to consult his attorney before signing the contract again, due to issues with the supply chain, material delivery and lack of contractor availability.

However, Huresky explained that even though the developer is in breach of the contract, the contract holders still have a contract. “Everyone’s frustrated and I can understand that,” he said, explaining that it has been challenging to get in touch with Windell. “The communication has been weak because I don’t have anything. I call and I get nothing from him, no callbacks.” The News has also attempted to contact Windell multiple times with no response.

After finally receiving a very brief update from Windell last week, Hureskey shared that “the developer’s attorney is talking to the Town of Mt. Crested Butte’s attorney to try to figure out a way to move forward.”

This week, the Town of Mt. Crested Butte also shared an update. “The town is in a unique situation because we are not a party on the contract between the buyer and developer,” said town manager Isa Reeb. “The town has hired an attorney to help us better understand what our options are and how we can best proceed. At this time, we do not have additional information or context we can provide regarding the situation and what our role is going to be moving forward as we are in the beginning stages of receiving guidance from our attorney.”

Earlier in the fall, the town had stated that they were working with the builder to focus energies on three of the eight total buildings. Huresky explained that of the 22 units, seven units are dried in for the winter and there are foundations on two other buildings but the rest of the units haven’t even scraped the ground yet.

“When COVID hit it just brought everything to a halt with material delays, contractor delays, etc. I couldn’t think of a worse-case scenario with a pandemic, construction costs and delivery delays,” Huresky said.

Hureskey noted that four contract holders have backed out of the process and received their money back.

“I can’t imagine the scenario that some of these folks are going through, there is no housing, there are no rentals,” he said. “If a rental does come up it’s exorbitant in cost and we have a project that’s not making any progress.”

During the December 21 town council meeting, one of the families who had expected to be moved into their Homestead unit by now spoke during public comment to express their frustrations with the project.

“On June 6, 2019 we entered into an agreement to Homestead LLC to purchase a home with a projected move-in of March 2020. We should have been spending our second holiday season in our forever home,” said LaDonna Garcia. “Why is it that we have moved three times and my daughter still doesn’t have a room to call her own? Why is it we have no idea when or if we’ll be able to spend our next holiday in our home?

“In June of 2019 we could have purchased a home, maybe one we could barely afford but we could have been financed for a home on the private market. Instead we put our faith in the town to follow through with its commitment of the Homestead project. Two years later we have no home, no options to purchase a home on the private market, and we can’t even get financed for a home on the private market. Our income is derived 100-percent from the valley and yet we cannot afford to live here and we are homeless. I am currently 48 years old and I am living with my parents. Thankfully I have that option but there are so many more that don’t. This was not the life I chose when I chose to raise my child here. I’m not just speaking on my behalf, I’m speaking on behalf of at least four other families who are facing the same challenges.”

“I’ve lived in the valley since 1997 and was on the Housing Authority at least 10 years ago,” said Neil Windsor, LaDonna’s father. “I’ve watched and seen how difficult it is to provide housing for the people that need it. I’ve also watched the situation go from critical to absurd, really, how deep the need for housing is just to maintain the services we need in the community. I think you’re all aware of it and I think you all are committed to affordable housing.

“I’m just shocked, I’ve watched this project from the beginning, and never was convinced that it looked like it was going to be developed in a timely matter or with very much quality,” said Windsor. “But COVID happened, a lot of things happened, and we assumed things were going to get better and we waited and waited and extended things…I’m putting it to the Town of Mt. Crested Butte that once you sold this property or even acquired it for affordable housing that you made a commitment to roughly 50 people, they were expecting to have a reasonable place to live within a reasonable period of time.”

He concluded, “I think you need to go repeatedly public letting people know that you’re committed to make this project work. To let these people just leave and say, well you’ll get your deposits back and just leave the valley is not only wrong for them to do but it’s also wrong for you as a council to permit that…At least communicate that you’re behind this project one way or the other and you want to see it through.”

Andre Garcia, LaDonna’s husband, also spoke. “I work for Vail [Resorts] in lift maintenance and like to think that I have a very important job on this mountain. My wife is an HR manager for the Town of Crested Butte and both of us hold jobs that if we had to move out of this valley it would really impact the community. We want to stay and raise our family. Affordable housing is essential to keep families like us here.”

He continued, “I know nobody could see COVID coming and the changes it would make on all of our lives… the problem with all of this is there is no communication with us. We literally found out from the newspaper like every one of you that our house was not going to be completed on time.”

After the meeting, Reeb sent an update email to the homebuyers as requested. Reeb said she had spoken with the Garcias previous to them attending the town council meeting and has spoken to everyone under contract that has reached out to the town with questions.

The town also shared with the News what they sent to the homeowners whose contact information they have:

“The Town has hired an attorney to understand the Town’s options regarding Homestead. To clarify the Town’s role on the Homestead project, we are the regulatory agency for the project, which means we monitor the builder to confirm compliance with the Prospect Design Guidelines, Town Code, Building Code, and on-site safety. Currently the town cannot intervene in a contract between a builder and buyer, as we are not a party to those agreements; nor can we offer any legal advice. We will provide additional information when we have more to share, however, that information could take some time. I echo previous sentiments that the entire situation is disheartening, and we are doing our best to understand if there are any ways the Town can assist.”

Reeb also noted during the January 4 town council meeting that she plans to provide Homestead updates on her manager’s reports for each council meeting. When there is a decision to be made, it will become an agenda item.