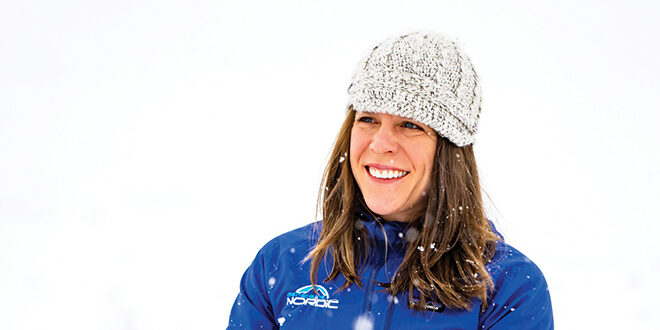 Forty. Laura Puckett Daniels doesn’t really feel or relate to that as an age factor of any sort as she headed into her fourth decade on January 12.

Although, as a writer, she might be inspired to wrap some prose around it and reflect on her incredible journey so far, one that has taken her from multiple childhood homes to the far reaches of Mongolia. “I was born to be 40, at 16 I should have been 40,” she laughs. “I’m just hitting my stride.”

Having had a somewhat nomadic childhood when her father continuously moved the family to advance his banking career, Laura went from South Carolina to Ohio, Indiana and Minnesota, where they finally settled when she was 10. She resoundingly rejects the millennial generation classification she was born into, however, growing up without cell phones, social media and dial-up Internet she says, “I’m grateful because we could interact with each other, as a kid it was much healthier.”

As a youngster, church was part of their family life, where she and her father sang in the choir. She wasn’t very outdoorsy, she admits. “I preferred to read, do art and my own thing. I was a pretty shy kid.” But in seventh grade she began running cross country. “I liked cross country because it was the closest I could get to flying. There was a real sense of freedom to it. It was the first time I experienced the joy of movement. In the Gunnison Valley, we know that feeling, whether it’s riding bikes, skiing or dancing, there’s a real joy of moving our bodies through the world.”

Through high school, Laura became more focused on cross country running in the fall, track in the spring and Nordic skiing in the winter. Beginning at the age of 13, she attended an intense canoeing and backpacking camp on the edge of the Boundary Waters in Minnesota every year, which profoundly influenced the course of her life. Each subsequent summer, the trips became longer and further north so that by the age of 18, she was spending 42 days paddling through the Canadian Arctic Ocean with 24 hours of daylight, no communication and accessible only by bush planes. “It changed how I perceived myself. I was an indoor kid, I didn’t see myself as hardy or sporty. I started to realize that I was strong and had endurance. I started to believe I was capable of things I never thought possible,” she said of her growing self confidence. “It was really formative for me for how I approach life and that’s how I’ve done every job ever since.”

After high school graduation in 2000, Laura enrolled at Davidson College in North Carolina on a running scholarship. “College was good at helping me understand that I was a small fish in a big pond,” she says of her running. “I was top 10 in high school, but in college I was trying hard to be in the top 50.” However, Laura was really more of a poet and chose English as her major with a semester abroad in New Zealand. “I was interested in the environment and how people interacted with it so I took an ecology field study,” she smiles and adds, “Also, I was a big Lord of the Rings fan. “We did backpacking, snorkeling and birdwatching in different ecosystems with so much biodiversity. I didn’t love the science part of it, sampling invertebrates from a stream was not my passion but I loved watching how people interacted with the land. I talked to people about their history and relationship with the land they loved.”

Laura had her dreams of being a poet and traveling. “If I was going to be a writer I needed more experiences in the world to write about,” she says. In the summer 2004 she became the canoe guide for the camp program she had been in. In the fall, she taught middle school English for a year in Chambery, in the foothills of the French Alps. “I joined a Nordic ski club there not realizing that these clubs were training grounds for the Olympics.” She started out training with others in her age group, which she confesses was a disaster because she was out of her league. “They kept moving me down into younger groups,” finally putting her in with the 10-year-old girls, “where I finally learned how to Nordic ski.”

In 2006, Laura returned to guiding canoe trips, staying at camp that winter to teach environmental education. “I loved living at camp but it was in far north Minnesota and isolated, and I really missed doing things and the cultural scene.” She bolted for Minneapolis where she was hired as an editorial assistant for an arts and culture magazine called The Rake. When she was awarded a Fulbright Scholarship to study poetry and nomadic culture in Mongolia, she left for the Steppes. “I wanted to go to a traditionally nomadic country because I was interested how people interact with place. I was looking to understand my own nomadism because I had moved so much in my life. I had always felt pretty displaced.

“I was trying to find a way of feeling a sense of home and place while being in motion,” she explains. “I thought living and studying nomads could teach me something about that.” Laura lived among Mongolian peoples for 11 months, learning their obscure language and culture. “I went with a research idea but the reality on the ground was a lot more difficult. I focused on a specific region, Hovd, on the far western border of Kazakhstan, and focused on meeting poets in that region. They have a long heritage of poetry in their culture.” From Hovd City, Laura traveled to more remote villages in that province, interviewing poets there.

Afterwards, there was the extensive work of translating the concepts with her interpreter. “I would interrogate them in Mongolian about their experience of place, then try to capture an English equivalent.”

As much of a learning experience as it was, Laura returned to the States a bit rattled, tired and searching for her own sense of place. “I thought I wanted to travel my whole life and be a nomad, but instead of looking for the next big trip, I started looking for a home.” When she was teaching in France, a friend there with a family home in Meridian Lake had spoken of Crested Butte with such fondness that Laura visited her in the winter of 2008. “I thought it was like a fairy tale. I had never been someplace so beautiful.” She was working as a barista in Minneapolis, freelance writing and, “Trying to write my big book about Mongolia. I was trying to figure out what was next for me. I wanted to make a home somewhere and I needed it to be closer to nature than living in Minneapolis. I was always happiest in wild places.”

She spent that fall driving around the west and applying for jobs in places she thought she could make home. “I visited a lot of cool towns but CB was always there as the ideal,” she says. But right about that time, the economy crashed and Laura was out of money with no work. “I realized that if I was making coffee and cleaning toilets I might as well do it in the most beautiful place on earth,” so she packed up the Subie and arrived in CB on her 27th birthday, “And I haven’t left since,” she smiles.

Being here has given Laura a sense of groundedness, she says. “To me, it meant I had access to wild, soul soothing places but I quickly fell in love with the interconnectedness of knowing people.” She immediately signed up to teach at the Nordic Center. Within a month, she started coaching high school track at CBCS. Throughout her time in CB, Laura worked multiple jobs but in the winter of 2009 she became assistant manager, then manager of the CB Nordic Center (CBNC) and in 2012, development assistant for CBNC while attending Western Colorado University for a teaching license. She spent five years as a middle and high school English teacher at CBCS. “I love teaching, the kids, and I love that school, but I felt called to serve our community in other ways.”

In 2016, Laura completed her masters degree in education from WCU, while she was teaching English. She’s still a cross country running coach in the fall. “I’ve coached something 11 of the 13 years I’ve been here.” She had been on the board of the Crested Butte Mountain Bike Association for two years, after which she was hired there as staff in 2018, but the Nordic Center wanted her back. “They scooped me back up in 2019 as development and marketing director,” she says of her current position.

One of her first jobs was Shades on Elk, which is where she met her now husband, Pete Daniels, who came in to buy sunglasses. “He was really witty and we chatted. I was 27, single and living my best life, skiing a lot, hanging with friends, going out to every party and fest that existed in CB. Pete would walk the bars as his night shift (he’s one of our beloved CB marshals),” and one night they had an in-depth conversation. They started dating in July of 2010, “We’ve been together ever since,” Laura tells. They married in February of 2016.

Laura is immersed in the community she feels is her everlasting home, serving as the chair of the Gunnison County Planning Commission for the past three years, as the first woman to hold that position. It’s also her second year serving as secretary on the School District Accountability Committee. Additionally, Laura was recently named to the Colorado Peace Officer Standards and Training Board (POST) as well.

“It’s hard to imagine living anywhere else,” she feels that it’s about the community. “I have incredible friends here, but one of the things I love about our town is, you have your first tier of friends but then there’s your acquaintance friends, your next circle is so large it’s hundreds of friends – the folks you have a beer with on the deck of the Brick in the spring, the folks you see on the Nordic trails, the folks you see at the KBUT Fish Fry, or those who commute on the Rec Path the same time of day that I do. I feel like that interconnectedness is what makes this place so special. I firmly believe our community is still there and still strong, but sometimes you might have to look a little harder,” she says of the changes here. But she tells of walking down Elk, sitting on benches with people and feels, “A real easing of my heart.”