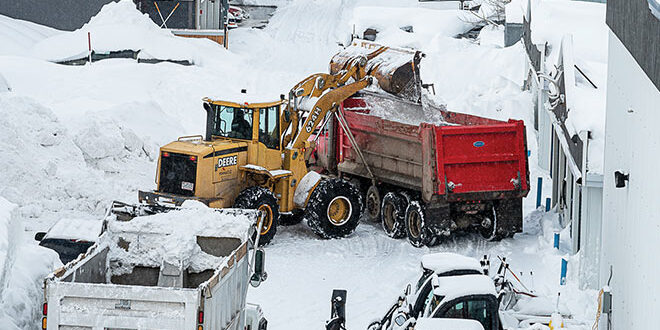 Looking for more places to store the snow in the future

An incredible amount of snow has been transported by dump truck from around Crested Butte and the North Valley to the Crested Butte gravel pit in the last two weeks. Approximately 5,000 tons of the white fluffy stuff is now piled and melting along and into the Town Ranch wetlands.

Crested Butte public works director Shea Earley said more than 2,000 loads have been taken to the permanent snow storage lots in the gravel pit and along the hillside. He said typically they haul 10-12 cubic yards per truck which would roughly amount to 5,000 pounds in each load.

“We have quite a considerable amount of snow pack that has developed due to the amount of snow that accumulated on the roadways during the daytime hours of the storm cycle,” Earley explained. “The plan now is to peel the pack and widen the core streets in town, the bus route, the emergency route, and areas where surface drainage collects. From there, we will need to start addressing some of our snow storage lots in town, which on a typical year we do not haul. We normally just let the snow sit at the Four-way, the tennis courts, the green strips on Eighth Street, etc.). At the same time, we will begin widening and peeling pack on non-critical roads in town, clearing enforcement signage such as parking and speed limit signs, and clearing fire hydrants.”

Given almost 100 inches of snow fell in two weeks, Earley said the situation has gone very well. “The primary snow crew has done an amazing job. They were working 12-14 hours a day throughout the storm cycle,” he said. “They really had everything prepped and ready when the storm came. That has put us in a good position.”

What isn’t necessarily in a good position is the number of vacant lots the town uses to store snow. Because people are building on empty lots, the town snow storage plan is sometimes having to adjust on the fly. Town manager Dara MacDonald said that the town council would meet in executive session next week to consider the purchase of some vacant lots to be used for winter snow storage.

“Losing some traditional storage lots generally means that we have to haul our temporary lots more,” Earley said. “Fortunately, we have not lost a lot that strategically is critical to operations as of yet. If that were to happen, we may have to address operational changes in that part of town.”

As for the present situation, Earley predicts it will take another two to four weeks to catch up from the Santa Slammer depending on how January weather plays out. The budget impact of this major snow hauling program is not yet settled as invoices from private companies helping with the program have not yet come in. Earley admits it will probably ding the budget pretty good given the amount of work involved.