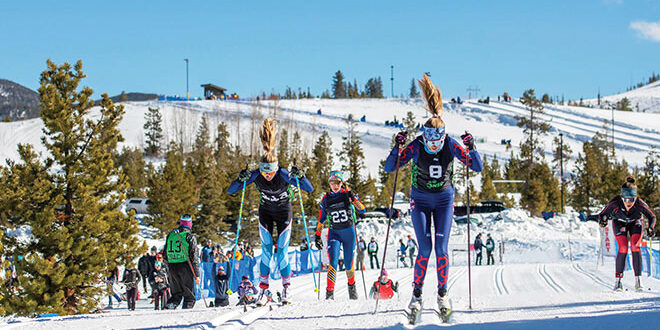 Gaining speed and technique with every race

The Crested Butte Nordic team (CBNT) just finished up two more race weekends with events in Winter Park January 21-22 and then a weekend in Frisco February 5-6 and now have three athletes almost certainly qualified for Junior Nationals with a fourth currently on the bubble.

Following their first races of the season, the coaches and athletes started to take all of the kilometers under their skis and start focusing on putting that into race mode. The effort looks to have paid off when they put it to the test in Winter Park.

“The Winter Park races went really well,” says coach Molly Susla. “We had been focused on race strategy and the kids went into the races with a plan. We started to see overall improvements and the kids had some more breakout results.”

The athletes and coaches continued their focus on race strategy and some fine-tuning and saw a similar bump in their effort and results in Frisco two weeks later.

“We had another amazing weekend overall,” says Susla. “And not just in results but in some of the personal tweaks we’d been working on.”

The weekend opened Saturday, February 5 with a classic sprint. Athletes first ski an individual qualifier run on the 1.2-kilometer course with the top 30 times advancing to the knock out rounds and all seven of the CBNT skiers advanced.

U18 skier Oliver White finished the qualifier round in 22nd place but had his day end in the quarterfinal heat.

Piper and Katie O’Neill then lined up for the u18 girls races and after the two made the cut to the knockout stages finishing in 11th and 19th place respectively, Piper eventually made it to the semifinals before getting bumped while Katie fell just short in her quarterfinal race.

“Katie has been doing well in sprints and Piper had a great result,” says Susla.

U16 boys Finn Veit and Julian Ryter each made it to the quarterfinals before getting knocked out as did u16 CBNT girl Sophia Bender but Sawyer Ezzell had other plans. Ezzell finished fifth in the qualifier round, won her quarterfinal round and took third in the semis to advance to the finals and finish the day third place overall.

The CBNT athletes then lined back up Sunday, February 6 for skate race events complete with a mass start, which can be a shock to the system for any young racer as pole plants to the ankle or top of the foot from your competitors at the start can and do happen. In addition, finding the right time to pass opponents is an art unto itself. Fortunately, it wasn’t their first rodeo with this type of event.

“It was their second mass start so they had an idea of how they wanted to race it,” says Susla.

Also working in their favor was the course itself as the Frisco track had a lot of similarities to the track they train on in Crested Butte.

White was the first CBNT athlete to race and after a tough start position, White followed his plan the entire race to pick off the competition and finish in 10th place overall.

“It was his first top 10 of the season,” says Susla. “It went out fast so he had a lot to make up but he knew what he wanted to do and he got there.”

Piper and Katie also stepped up their games in the u18 girls’ race as Piper posted her top result of the season coming in 14th and Katie placed 20th.

“Piper is starting to ski to her potential and Katie was also dealing with a calf injury, so she had a really good effort through some extra pain,” says Susla.

The u16 CBNT skiers then stole the show for the Crested Butte team led by Ezzell. Ezzell stepped up on the podium for the second time that weekend placing third in her race.

“She made a move early to get into third place and held the girl in fourth place off,” explains Susla. “She was on fire all weekend.”

Veit had the next best result for CBNT as he finished his race in fourth place, just inches out of third.

“He’s an amazingly smart racer and that was his best result of the season,” says Susla.

Bender and Ryter are still cutting their teeth on the skate mass start race plan but fought their way to 17th and 20th place finishes respectively.

Training gets tweaked now for the CBNT athletes as Susla has a separate plan for the three that have qualified for Junior Nationals. Meanwhile, the other skiers will prepare for the final race of the Rocky Mountain Division season February 19-20 in Minturn. There’s a chance that one more could make the Junior National cut with some strong results in Minturn which means four CBNT athletes are headed to Minneapolis, Minnesota for the big show March 6.