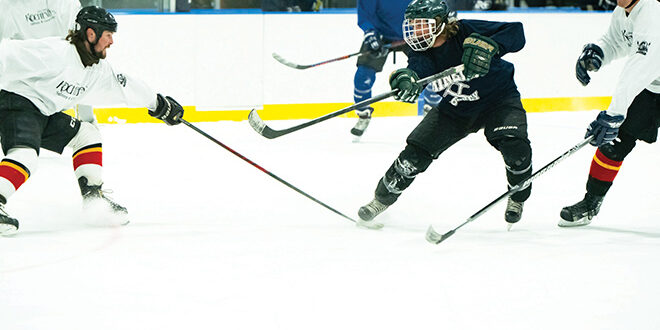 How did this team slip through the draft like it did because Kochevar’s is stacked. Stacked with former Crested Butte Wolfpack players who all grew up playing together and are now back in town. To make it even worse, or better depending on your allegiance, is the fact that they picked up CJ Hoover as well. Don’t get me wrong, Hoover is not a hockey player but with a town league softball title to his name, he knows how to win.

Kochevar’s noticeable advantage was on display Monday night when they faced REG in town league hockey action. REG doesn’t suck, in fact they may be one of the most organized, team-oriented squads in the league and Kochevar’s slid by them over the course of three periods to a 9-0 win.

And while their youth and dominance, and sometimes youthful arrogance, may be a bit unsettling, it’s still cool to see old friends on the ice together, especially brothers Isaac and Sam Evans.

Kochevar’s opened the scoring in the second minute of the game when Mick Osmundson tipped a shot past former Wolfpack goalie Nicholas Mikeska and it appeared the rout was on.

Yet, REG’s organization on the ice and quality roster of players did manage to hold off Kochevar’s for a stretch. Justin Blair, Ethan Carroll and Dylan Curtiss (also Wolfpack alumni) had things locked down defensively while Axel Deer, Betty Welsh and Keitha Kostyk looked to connect on attack.

But the constant pressure and pace of Kochevar’s eventually wore REG down as the period continued and Kochevar’s soon fired off three goals over three minutes to build a 4-0 lead. Sam Reaman started it off skating in from the wing to fire a backhand in. Ninety seconds later Isaac set Reaman up in close for another goal and then Osmundson scored on a rebound from a shot by Collin Dill.

Given the circumstances, REG ramped up their effort to open the second period. Deer and Torrey Carroll each had chances in close only to get denied by Kochevar’s goalie Eric DiMarco. A minute later a no-look pass from Ethan to Dodson Harper set him up with a clear lane to net but DiMarco pulled in the puck with a glove save. Welsh and Deer then connected for another open look on net but again, DiMarco denied.

At that point, enough was enough for Kochevar’s and, led by the Evans brothers on defense, they offered no quarter to REG. They threw everyone and everything at REG’s net and after a mad swatting of sticks, Isaac finally punched the puck past Mikeska. And while Mikeska came up big to deny a series of one-on-one’s, Kochevar’s tacked on a sixth goal in the final six seconds of the period as Ryan Fitzsimmons blasted a shot off the post and in.

Town league rules dictate that if a team is up six goals in the third, the clock runs no matter what. But, credit goes to REG as they opted out of that rule to get their full game experience.

And they hung in and gave their all but when you got a bunch of 20-somethings full of vim and vigor skating at you and showing no signs of slowing down, the scoring continued. Isaac netted his second and third goals of the game and Reaman capped off the onslaught scoring Kochevar’s ninth goal of the game in the final 20 seconds.

They’re not making any friends out there but why should they, they have each other. Now, take a lap and no, I haven’t gotten over the loss to Telluride, Alamosa, Ridgway, Colorado Academy or Salida. Never will. Whatever happened to “Kevin?”