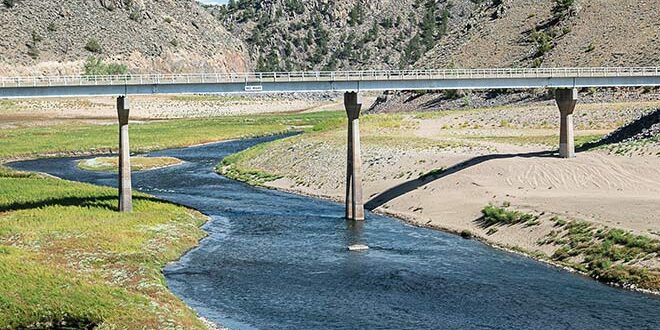 Local reservoir storage expected to be up overall

Water experts are monitoring closely how the series of big storms at the end of 2021 and beginning of 2022 will affect local stream runoffs, or if the dry spells since then will continue to counteract the gains made in snowpack and snow water equivalency. Drought conditions have worsened across the state, becoming more widespread and more extreme in general, and a large portion of Gunnison County is now considered ‘abnormally dry.’ That may be the new normal, even with sporadic large snowstorms. However, the runoff forecast for both Blue Mesa and Taylor Park reservoirs look on track to fill up to 90 percent of capacity or more, as of February 1 calculations. No additional emergency releases are expected out of Blue Mesa at this time.

“There are no areas now in the state of Colorado that have no drought conditions,” she reported. “Last summer there was quite a big area that was considered not in drought, however that is changing slowly and there has been an increase in the area where extreme drought conditions are worsening.”

Areas of the state characterized as in ‘extreme drought’ have increased from 7 percent to about 19 percent since the beginning of the water year on November 1, said Richards.

Richards shared a photo of the Gunnison Whitewater Park at 4,400 cfs (cubic feet per second) from a few years ago. That is at the upper end of flow levels for the Gunnison River, which ideally ranges from 600 to 5,000 during the spring and summer seasons, according to American Whitewater. “It’s still kind of up in the air whether we will have that much water going through there,” said Richards of this year.

She also reviewed that there were six storms in December in which cloud seeding generators were used, but only one in January.

Based on early season projections from the Colorado River Basin Forecast Center (CRBFC), the Bureau of Reclamation has projected the total 2022 unregulated inflow into Blue Mesa will be at 825,000 acre-feet, or 90 percent of average. “Hopefully the snowpack will continue to grow so that we do actually see that,” said Richards.

At Taylor Reservoir, the CRBFC has forecasted runoff into the reservoir to be 1000,000 acre feet, which is 106 percent of average. The Taylor is projected to be 93 percent full after runoff, which is considerably higher than last water year. “The next couple of months, the forecast is going to be really important,” said Richards, as releases will be planned and adjusted based on those.

“We don’t anticipate any more emergency releases like that in the near future,” answered Chavez. She said the Navajo Reservoir had not been called upon last year so the next release, if needed, would come from Navajo first.

County commissioner chairperson Jonathan Houck commented that water resources are on a lot of people’s minds. “We are beyond the point where a miracle March or miracle May or big December/January storm saves the day,” he said. “And so keeping that in perspective, as much as we are happy to see that kind of significant precipitation, we know we are a long ways from solving the issues being driven by climate change and drought.”