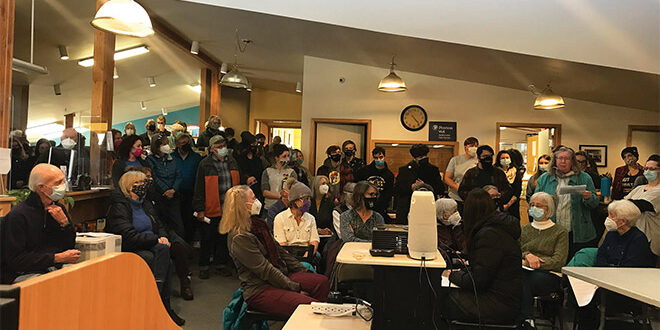 Is Gender Queer pornography or a lifeline to the LGBTQ community?

The Gunnison County Library District will not take away or reclassify the book Gender Queer: A Memoir by Maia Kobabe as requested by a Crested Butte library patron last fall. An hour-and-half public meeting was held Thursday, February 17 at the Gunnison Library and the facility was packed with people objecting to any effort to ban any book in any way.

Rebecca White made a written request to the library district through its “Request for Reconsideration of Materials Form” last November objecting to Gender Queer, which she described as a “pornographic book on the young adult shelves in the Gunnison Libraries.” She cited concerns that the book could groom “underage minor children to accept pedophilia, underage sex, gender dysphoria as normal. This is sexually exploitive material inappropriate for minor children” that she said was in violation of several Colorado laws. She also approached the Gunnison County commissioners with her concerns at the February 15 meeting, but they told her they have no control over library district policies.

District director Drew Brookhart said this was the first book challenge he had encountered as the Gunnison County Library District director. He responded to the request in writing saying he and the district’s legal counsel had reviewed the book and the state statutes cited by White. “I have concluded that Gender Queer: A Memoir by Maia Kobabe should be available to the residents and visitors of Gunnison County, Colorado. The memoir will remain in the collections of Gunnison County Library District,” he wrote.

During the February 17 library board meeting, White said via the online ‘gotomeeting’ link that she loved the county libraries, but explained her objection was that the book was a graphic novel with explicit sex scenes and not located in the appropriate place. “The message from the memoir is a beautiful message. The difficulty I have is with the explicit pictures, which in my opinion are too explicit for children under 18 years old. My request is not to remove the book from the library, it is to simply put it in the adult section. That is where I think it belongs,” she said stating that the book sits on a shelf at about the eye level of six-year-olds. “That would provide a little more supervision. Right now, a child could walk up to the shelf, open the book and see something their parents are not yet ready for them to see.

“It is written like a comic book,” White continued. “The pictures that accompany the text is what is objectionable and I am in no way asking for the book to be removed from the library. I agree it should be available. But there should be supervision with this particular book. I recommend the board read the book and I think they would then agree it belongs in the adult section.”

But the audience at the public hearing made the case that any attempt to censor the book in any way was a slippery slope. No one else spoke in favor of White’s position but many argued that the book was a needed support vehicle for students in the LGBTQ (lesbian, gay, bisexual, transgender, queer/questioning) community and that having it in the young adult section was the best place for it to be.

“The images are not too much for younger people. The book is, I believe, right where it should be,” said Ashley Weinmeister who is a leader with Spectrum, the LGBTQ Club at Western Colorado University. “When I was in middle and high school I had to go to sex ed classes and to me it didn’t seem to fit. This book especially hits home for me because I identify with it. Growing up asexual sucked. Having a book like this is the difference between growing up thinking you are broken and knowing that you are not alone. It belongs in the young adult section because it is the young adults who are struggling the most in that life right now.

“It is those of us going through high school and college right now that don’t know who we are and are trying to figure it out the best we can,” Weinmeister continued. “We need books like that in the libraries where we can find books that we can relate to. It needs to stay right where it is, where it will be the most useful to the most people who are in the most danger right now. LGBTQ youth are five times more likely to commit suicide than their peers. Do we want them to feel more alone? I don’t.”

“While guardians have every right to dictate what their own kids read, they have no right to make that decision for other kids,” said Priscilla Walsh. “Books have not made me who I am but they have helped me understand who I am.”

“If I had had Gender Queer available when I was growing up I would have had context to understand myself. I might have questioned my feelings,” said Malia Jones. “Instead I pushed them downward and they bubbled up at 30 years old. The images in the book are not new to teens. They are not too graphic.”

Cory Ragsdale agreed. “Fifteen-year-olds probably see worse online or on Twitter than what is in this book,” she said. “If you are a teenager online you see a lot more. The more we educate youth about having safe sex – and they will have sex – the better.”

“This book is not pornography, it is an educational tool,” said Alex Stefan. “It is a powerful resource. If this book offends you, understand that the book is not for you.”

Sharon Schlegel of the Gunnison branch of the American Association of University Women wrote to the district stating, “a community is only as strong as all of its members and their understanding of each other. Banning of any books limits that understanding.”

Mariah Davidson said libraries should be a safe place for everyone.

“I don’t like anyone telling me what I should read,” said John Czenicki. “My savior is books. It is important to read different things and learn different things. What we see going on in this town is serious. I want the freedom to learn through books for the rest of my life. If you don’t want to read this book – don’t.”

“A library is the embodiment of the best of who we are,” said Lyda Hardy, a retired librarian. “Everybody is welcome. It is a community place and every member of the community should be represented through the books.”

“Being able to see yourself through things like books or the theater changes your life,” said Heather Hughes. “Realizing you aren’t the only one of anything can make a big difference. The library is the living room of a community.”

“There is fear in knowledge,” added Debbie Brooks. “The LGBTQ community are people. To take away material from them that gives them information is wrong. If we ban this book, what’s next? They’ll come back with something else they don’t like and I can’t stand for that.”

“If this particular book is banned, this will continue,” agreed William Bennett. “There will be further objections to further material.”

“If you ban a book, you ban a voice,” said William Scott.

“I may not understand the book but it will speak to some,” said Achilles Johnson. “No book should be banned.”

Ian Wrisley said having so many people participate in the public meeting was impactful. “We all need to read things that make us uncomfortable,” he said. “That’s how we learn.”

Brookhart concluded the public comment section of the meeting pointing out that the library district recently approved a new strategic plan. “Today we hit on a couple of things in that plan,” he said. “We want to make sure everyone in our community is welcome in the library and that they see themselves reflected in the collections of the library. That is a conscious strategic priority. And we want to convene community conversations and bring people together to talk about issues. We did that today too.”