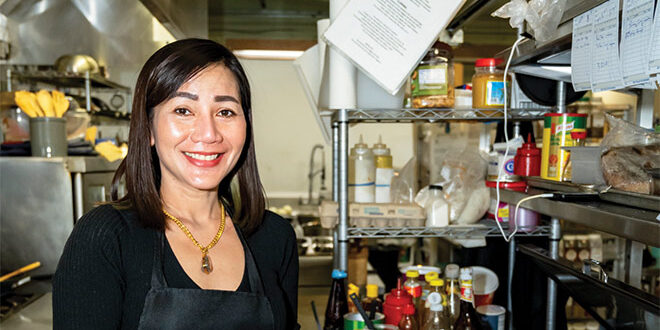 Patcharee Ashby is a pool shark, a bona fide expert billiard player, but when she’s not scoring points for her pool league, she’s “hustling” in her kitchen, hard at work for long hours making some of the best, authentic Thai food in all of Gunnison Valley. Her take-out menu has become so popular that people call in orders from Salida, Crawford, Powderhorn, Lake City and of course, Crested Butte, to pick up their meals. She proudly calls herself the rice farmer’s daughter, a reference to her farming family and birthplace in Kalasin, a rice farming village in northeastern Thailand.

Patcharee grew up with two older sisters and a younger brother helping their parents with their rice farming operation, where they also raised chickens and buffalo for the family food. They didn’t live on the farm – it was a 20-minute walk from their home in the small village of only 500 people. In her town, school began for children when they were six years old until they were 13 when they transferred to the city for high school. But until then, Patcharee explains that parents kept a watchful eye over their kids. “You played close to your house because your parents were very protective,” as were most parents, she tells.

When she turned 13, Patcharee moved to the city of Yangtalad for high school, a 30-minute drive on a “baht bus,” where the driver was paid for transportation (baht is the monetary denomination in Thailand). “I had to wake up early to catch the bus,” she recalls. “You couldn’t miss that bus because you’d have to wait up to an hour for the next bus.” High school is a five-year curriculum and because she was in a different town, she wasn’t working as much on the family farm for that time. “You go to high school until you’re 18. I played volleyball, basketball and a Thai sport called trakro,” she explains that the game is played with three people on each team and with a ball made from thick, flat reeds, hollow in the center, that’s kicked over a net using only your feet. Patcharee graduated in 2566… in the Thai solar calendar, or 2003 in our Gregorian calendar.

After graduation, Patcharee moved to the bustling city of Bangkok, working for Reebok as a quality checker in their shoe factory. She endured the exceptionally hard workday, from 7 a.m. to 5 p.m., with a lot of overtime, for four years. She didn’t do much outside of going to work. As most Thai kids do, Patcharee sent money back home to her family. ”I had friends at the factory but we’d only go out to buy food and cook together on Sundays,” she said of her day off. “We shared a room and we’d buy our food and cook together. You don’t make a lot of money and you have to pay for food and rent.” She left along with her best friend when she finally tired of how boring and mundane the job was. “It was the same thing every day,” she says.

One night in Bangkok in 2006, when she was out with her sister and brother-in-law, she met her future husband. “We went out for dinner and Dave Ashby was an acquaintance with my sister’s husband.” At the time Dave was a corporate pilot and squadron commander in the U.S. Marine Corps, flying service people to their various destinations. He was based in Okinawa, Japan, but the two hit it off and immediately started dating. When Dave retired, the couple moved to Kho Pha Ngan island, a small fishing village in southeast Thailand, notorious for its monthly, raucous full moon parties that attract sometimes 30,000 revelers.

They bought a commercial building and opened a restaurant and bar in 2007, naming it The Lost Dog. Patcharee was the cook. “We cooked Thai, American and some Mexican. We trained the Burmese staff to cook everything,” but Patcharee did all the Thai cooking. “It’s a big tourist area with the full moon parties and it brings a lot of young tourists. There’s no airport on the island so you have to take a boat.” In addition to the full moon celebrations, she says, “There are parties all around the moon – half moon, quarter moon and dark moon parties. There’s a lot of music. The beaches are beautiful, white sands and crystal clear water. Before the tourism, squid and coconuts were its biggest products and business.” The couple had a lucrative business there for an entire decade, through 2017, which is when they actually tied the knot in Thailand.

Dave had a daughter attending Western Colorado University in Gunnison and came to visit her here in the late spring of 2017. He had grown up in Evergreen, Colorado so he was no stranger to the mountains. Patcharee joined him on October 1 and they decided they wanted to stay in Colorado. After driving all over the state looking for a place to settle, Patcharee decided she wanted to stay in Gunnison. She liked its small-town feel and that it wasn’t busy, “And no traffic,” she smiles.

One night during their first year in Gunnison, the two hit the Alamo to shoot some pool. Patcharee had learned the game at their bar on the island where they had pool tables set up. When the captain of the Bad Leaves team saw her pool prowess, he immediately asked her to join the league, and she’s been a member ever since. “She’s a phenomenal billiards player,” her husband Dave says. She’s been a member of that team since 2017 and has scored more points than any other player and in the league that first year. Every year, they win the pool tournament.” Patcharee says, “Pool is something I can relax with and it’s the only thing I love to do after work. I prefer pool to parties,” she admits.

Dave had gotten a job as refuse technician in Crested Butte, “A trash man,” she laughs. “We got this great idea in the middle of COVID to serve Thai food out of the house.” They made up a menu and passed it out to the neighbors and, “It went nuts,” Dave says. “The menus wound up all over town,” and Patcharee’s Kitchen was born. Dave was taking the orders on his phone while he was herding trash and then texting Patcharee those orders from his phone. As the orders began pouring in, Dave would race down after work to help her out. They moved into the former Last Chance Saloon kitchen since they now needed a commercial space to work from. They filled orders there through six months while COVID raged before moving into the kitchen at Gunnison Vitamin and Health store, next to City Market. “It’s still take-out and everything is cooked to order and as fresh as possible.”

People start texting orders at 7 a.m. and by 1:30 p.m., Patcharee is booked through to closing at 7:30 p.m. “You have to text or call since it’s take-out only,” she explains. They’ve never advertised, because the business took off from just word of mouth. “People text or call anytime after 11 a.m. with their orders to pick up between noon and 7:30 p.m. There’s no online ordering but there’s a FB page with our menu. Our customer base isn’t based on tourism, it’s all local,” with Crested Butte contributing around 30 percent of the clientele.

“She is such a good cook,” says Dave, also known as the pot washer. “She doesn’t skimp, she doesn’t water down coconut milk like many places do and it’s fresh and good. Our profit margin isn’t great, but we’re easily making a living.” Every two weeks they do the schlep to Denver to load up on authentic Thai ingredients. With just the two of them working the business, neither have a moment to breathe, except for the pool league nights. Patcharee says, with her beautiful smile, “We like it here. We have a thriving business. I like the people and the small town feel. People have asked me to stay and it makes my heart not want to go anywhere else.”

Share
Previous Boys basketball takes two of three over past week
Next P.O. problems continue despite local and fed efforts