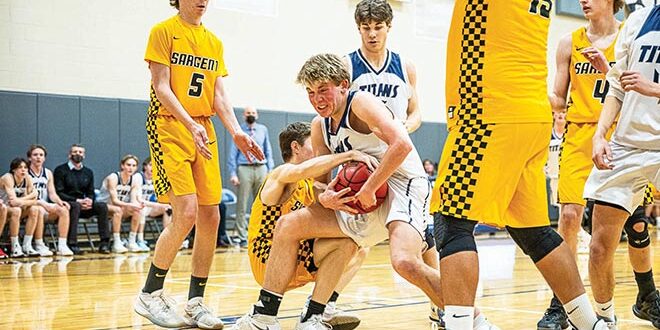 Boys basketball takes two of three over past week

With games rescheduled from prior weeks, the Crested Butte Titans boys basketball team is in the midst of a meaty part of their schedule and should be for the next several weeks.

They just wrapped up a big week as the Titans rolled to a couple of wins in their first two games of the week but fell in the third game of the week. The good news is, one of the wins came against a league opponent while the loss came at the hands of a top-flight 3A program and, as of right now, the Titans are sitting at the top of the league standings.

They tipped off Tuesday, January 25 against non-league opponent North Fork expecting another tough opponent from a bigger school but as the game started to unwind, the Titans wound up cruising to a 59-38 win.

“I anticipated them being a really good team, but we were a lot more skilled and had a lot more offensive weapons,” says coach Hannes Gehring. “We played a stifling man defense so they weren’t getting very many good looks.”

The Titans then, finally, got to host their first home game of the season when they faced the Sargent Farmers on Friday, January 28. Not only that, it was also the first time in a long time they could have a crowd so the energy in the gym merely ramped up the energy on the court.

“The energy was amazing,” says Gehring. “It was the first time in two and a half years we’ve been allowed to have a crowd.”

After a somewhat erratic first few minutes in the first quarter, the Farmers tied the game 10-10 with a three-pointer. While the coaching staff hoped not to use their press in this game, focusing more on their half court defense, they broke out their press for a brief stint sparking a 13-0 run to end the first quarter. The run started with a steal and lay up from Alan Prieto, included a long pass up court from Ace Gaither to Ethan VanMarter for another easy bucket and concluded with lay ups from Erik Wasinger, Grayson White and a three-pointer from VanMarter.

“There were a tiny bit of nerves early but they worked through that pretty quickly,” says Gehring.

The same effort continued in the second half as the coaches were able to get minutes and points from nearly everyone on the bench as they rolled to an 82-26 win. White led the team with 21 points, Wasinger scored 19 and Prieto finished with 10 while several other Titans tacked on points.

“Almost everyone scored which was great to see,” says Gehring. “That was about as clean of a game as you could have but there’s always room for improvement.”

Crested Butte then returned to the road on Saturday, January 29 to play 3A Coal Ridge for another tough non-league match up.

The Titans jumped out on Coal Ridge in the first quarter to take a 15-9 lead, but the Crested Butte shooters started to struggle and Coal Ridge took a three-point lead into halftime.

“They had some stout, tall guards who put a tremendous amount of ball pressure on us, but we handled the pressure really well in the first half,” says Gehring.

Struggles on offense continued to plague the Titans in the second half and that led to some erratic decisions leading the Titans down a slippery slope.

“We went cold in the second quarter and never really recovered,” says Gehring. “We started trying to make plays that really weren’t there.”

The Titans struggled from the free throw line as well and a slew of turnovers eventually led to the Titans’ demise as they fell 59-43.

“I think we benefitted more from the Coal Ridge game than the Sargent game,” says Gehring. “It does prepare us for that kind of ball pressure.”

The Titans jump back into league play this week including another home game when they host the Center Vikings on Tuesday, February 8 at 7 p.m.