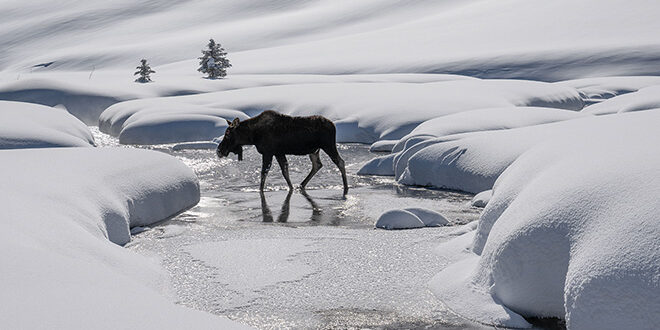 Having access to winter trails so close to town has its many advantages: the convenience, the scenery, the solace, the wildlife. Encounters with nature like the recent moose sightings up the Slate River drainage remind us to appreciate the remote beauty of where we live. But it’s also those recent moose sightings that remind us to let nature do its thing and respect it as much as we can.

In early January, a moose was spotted around Crested Butte Nordic’s Mike’s Mile trail along the Slate River. And while moose sightings aren’t exactly rare here at any time of the year, a video of a loose dog confronting the moose circulated around Facebook and even made it on WGN Chicago. CB Nordic was alerted of the incident and on January 15 made the call to close Mike’s Mile to dogs until further notice.

“We closed it to dogs right away to avoid any more incidents like that, for everybody’s safety,” said CB Nordic operations manager Kevin Krill. “We then contacted Parks and Wildlife and they agreed with our plan to keep it closed to dogs. We are going to keep Mike’s Mile closed to dogs for now until we get more direction from Parks and Wildlife.

“We know there’s plenty of people with well-behaved dogs missing that trail, but if there’s another incident with a dog, we’ll have to close that trail to everybody,” he said.

Brandon Diamond, area wildlife manager of the Colorado Parks and Wildlife (CPW) Gunnison office, said that while CPW and CB Nordic technically don’t have the jurisdiction to enforce a closure to dogs, it’s a best management practice based on the recent dog and moose encounter.

“Dogs tend to facilitate a lot of those negative interactions with moose. A dog confronting a moose or showing aggression toward the animal adds stress that could prevent it from feeding or resting for hours. The more we can avoid those situations the better it will be for wildlife,” said Diamond. “We thought closing the trail to dogs would be a good idea until the moose moved on. We want to work together to avoid any issues and give the moose some peace.”

Based on the photos of the moose that have been shared, Diamond couldn’t be certain if the moose was male or female, but he thought it looked like an adult.

“Moose shed their antlers earlier than deer and elk, so it’s hard to tell from the pictures,” he said. “Oftentimes the animal combination most prone to conflict is cows with their calves, but the one individual moose involved with the dog did not appear to have a calf.”

Diamond isn’t sure if there is more than one moose in the Slate River vicinity at this time. Krill said as far as CB Nordic knows, there haven’t been many sightings since the initial dog closure but there has been a lot of moose excrement on the trail indicating the moose is still around. Krill said that when CB Nordic asked the community on Facebook about sightings, two people saw a moose around the Gunsight Bridge and Oh Be Joyful areas this past weekend.

Krill notes if folks still want to ski with their pups, they can utilize the Pooch’s Paradise, Beaver Trail, Town Ranch and Riverbend trails.

According to Diamond, moose have done fairly well across the Gunnison Basin over the last several years and the populations appear to be on the rise.

“With our moose population on the upswing you’re likely to encounter moose in any of those drainages around Crested Butte – Gothic, Slate, Cement Creek and Ohio Creek.”

Diamond notes that moose are pretty docile until they’re cornered so it’s best to just leave them alone and get out of their way. He reiterates, “As a best management practice for where we live, keep your dog under control at all times. Especially because the winter is so hard for wildlife, it’s good for them and for everybody. We appreciate everyone’s patience and compliance with CPW in their recreational endeavors in the valley.”

If you notice any moose or other wildlife concerns from a public safety standpoint, Diamond said to reach out to CPW at any time. “Otherwise, if it’s simply an observation of a moose from a distance, enjoy the opportunity in nature and appreciate where we live.”