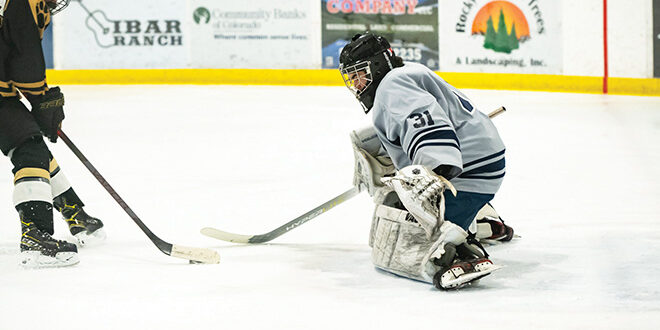 “Finding consistency is really hard for us”

The Crested Butte Titans are a young team, and at times that youth can cause some issues. But, over the past week or two, the younger players have been asked to step into the varsity fray more and more. Even more so recently as junior alternate captain Colm Piccaro and senior captain Jack Lambert have been out with injuries. Add in a rash of illnesses over the past month and the coaches have been forced to call on their youth movement like never before with some players getting their first varsity minutes and others being asked to step into new positions.

They seemed to be on the right track on Wednesday, January 26 when they hosted the Summit Tigers. The Titans jumped out to a 2-0 lead in the first period on a goal by Grady Dietrich in the fifth minute and then a powerplay goal from Evan Sowards in the 13th minute.

But youth and inexperience started to take hold and a series of penalties gave up three powerplay goals to Summit over the course of the next two periods concluding with a game winning goal in the final two minutes as Summit escaped with a 4-3 win. Jack Perkins finished the game with close to 40 saves in the loss.

“That game and the Aspen game were two games we lost because we were undisciplined,” says Watson. “Some of that is on the coaches and having new lines. But that game was a tough one to swallow.”

Watson and the coaches had a team building exercise to help bring the team back into the fold as a unit as they then turned their attention to Battle Mountain on Friday, January 28.

“Since then our team has been clicking much better and the energy was up at practices,” says Watson.

Unfortunately, Battle Mountain was just too much for a young Titans team without two of their captains. Crested Butte hung in there and played as hard as they could against Battle Mountain but the level of play was unsustainable over three periods as they fell 5-0. TJ Wonnacott was between the pipes for the Titans and he finished the game stopping 47 of 52 shots.

“They’re a good team and we battled hard for what we had,” says Watson. “We needed better net-front presence on Battle Mountain’s goalie and we just couldn’t get it going.”

Crested Butte wrapped up the week back on the road when they headed to the Front Range to face 5A team Heritage on Monday, January 31.

The Titans were a bit overwhelmed in the first period falling behind 2-1 with the Titans’ goal coming from Sowards.

“I think we came out a little intimidated, they were big and fast,” says Watson. “We just couldn’t get our breakout going.”

Watson used the break between the first and second period to make some tweaks to their systems and the players responded both tactically and in attitude.

“The nerves calmed and I lit a fire under the boys,” says Watson. “We changed things up a bit and got a lot more offensive opportunities breaking out.”

The Titans took advantage of a powerplay eight minutes into the second period as Connor Zummach scored to tie the game. Thirty seconds later Brendan Hartigan scored for a 3-2 Titans lead as their adjustments were opening up a slew of breakaways.

Heritage tied the game back up 3-3 a minute later and the two teams played through a scoreless third period and a scoreless overtime to finish with a 3-3 tie. Perkins finished with 45 saves in the game.

The Titans head back on the road this weekend for two games against Pueblo County and with penalties taking a dramatic drop and the younger players adjusting to their new roles, confidence is high heading into the weekend.