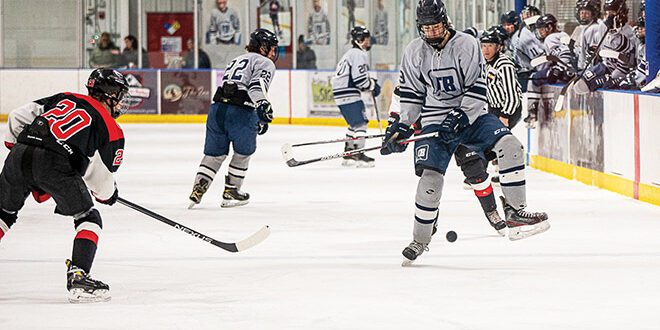 “It’s really important that we keep this confidence”

Regardless of the opponent, the young Crested Butte Titans high school hockey team is starting to realize that they can play with anyone.

The coaches have known it, but it was just a matter of getting their young team to believe it. And after their effort Friday, February 11 against Battle Mountain, the top 4A team in the state, even the players are starting to believe it.

Just two weeks earlier, the Titans fell to Battle Mountain 5-0. So, in an effort to get ready for the challenge, the coaches tweaked some of their plans accordingly and had some time for the team to work on it.

“We switched up our systems and started working on them on Monday to get ready,” says coach Billy Watson.

Not only was Battle Mountain going to be tough, but it was also their senior night so the crowd was near capacity for the game to cheer on the top-ranked team. But, once the puck dropped, the work all week long started to pay off as Crested Butte took charge and set the tone for the game immediately.

Unfortunately, the scoreboard showed otherwise as Battle Mountain scored two goals toward the end of the period for a 2-0 lead.

“We outplayed them that first period and the kids knew we were dominating them,” says Watson.

Down 2-0 to the top team in the state, on their home rink, on their senior night, the game could have easily gotten away from the Titans. Yet, they stayed within their systems, continued to disrupt Battle Mountain’s play and after killing off a penalty midway through the second, the Titans’ effort finally paid off.

Rhodes Moffett cracked the seal on the Battle Mountain net scoring off an assist from Connor Zummach in the ninth minute. Two minutes later Grady Dietrich tied the game with a goal and three minutes later, Cael Medina scored to put the Titans on top 3-2 heading into the third period.

“We were doing a great job of getting pucks to the net and crating heavy traffic in front,” says Watson. “We just had great net-front presence. It was great to see them battle back.”

Battle Mountain switched goalies between periods and while the Titans looked to keep doing what they were doing, Battle Mountain started to turn things around. A Titans penalty in the final two minutes put Battle Mountain on the powerplay and they pulled their goalie and tied the game to send it into overtime. They eventually escaped scoring three minutes into overtime to stave off the Titans’ upset bid. Titans’ goalie TJ Wonnacott finished the game with 21 saves.

“That was a tough one but, overall, it was great for such a young team to experience that,” says Watson. “To know you can play with a team like that gave our guys a lot of confidence.”

Down, but not out, the Titans returned home late that night and then suited up again Saturday, February 12 to host the Glenwood Springs Demons. On paper, the Demons are on the opposite end of the spectrum from Battle Mountain but they were fresh off a huge win the night before over Aspen and they are known for being able to frustrate opponents to keep games closer than they should be.

That’s pretty much what happened on Saturday as the Titans struggled to find any cohesion on the ice despite their riveting rendition of the National Anthem prior to the game.

Titans’ goalie Jack Perkins came up with a couple of key early saves as Crested Butte was still recovering from the heartbreaking loss the night before.

They finally pulled enough together to open the scoring in the fifth minute. Sam Dukeman won a face off just outside the Demons’ zone and the Titans rushed the front of the net. Jack Lambert’s initial shot popped up and over the Glenwood goalie and Medina poked his stick behind him to push the puck over the line for a 1-0 Titans’ lead.

The Titans then had a powerplay and were dominating play toward the end of the period but Glenwood held them off to keep the game tight.

The Titans ramped up their energy for the start of the second period but continued to struggle to garner the same effort that worked the night before. Then Glenwood struck back in the seventh minute to tie the game and it stayed tied until the third period.

The Titans had the tough task of killing off two penalties to start the third period and they did. Then after several minutes of erratic play from both teams, Crested Butte finally broke the tie when Grady Buckhanan stripped the puck off a Demon player and skated straight to net to score.

As time wore down, Glenwood pulled their goalie and pressed hard but Perkins made another batch of big saves and the Titans held on for the 2-1 win. Perkins finished with 36 saves in the game.

The team should finally be back to full strength for their final two games of the regular season, including their own senior night against Aspen on Friday, February 18 at 6 p.m. They head to Denver the following day to face Kent Denver.

“It’s really important that we keep this confidence,” says Watson.