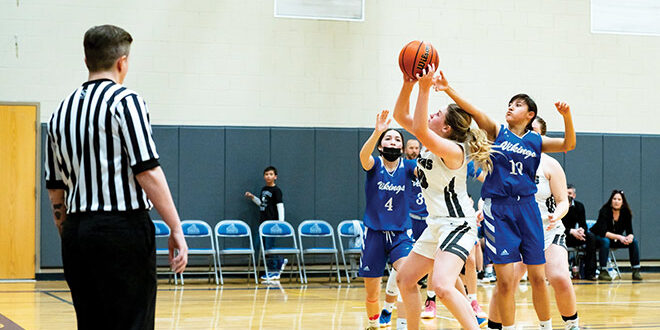 The Crested Butte Titan girls basketball team had a tough stretch this past week as they lost all three games. But, and there’s always a but, with more players contributing on offense now, the team continued to take positive steps forward as they look to close out the season over the next week.

They started the three-game stretch by hosting the Center Vikings on Tuesday, February 8 in Mt. Olympus. The Titans looked to Lexi Pickering immediately as she opened the game with a three-pointer and an offensive rebound and basket inside. They followed that up with a solid press and when Blakeley Reynolds dished the ball to Hayes Freeman for a basket and Leigh Harpel knocked down an eight-foot jumper, Crested Butte was out to a 9-3 lead.

Center rallied back to take a 19-13 lead midway through the second period but coach Amanda Reynolds called a timeout to get a moment with her team before the game got away.

“I just reminded them what we’re trying to do and who we are,” says Amanda. “The common theme has been to follow the game plan.”

The Titans got back to their game plan and Pickering knocked down two more threes to help spark a 14-6 run and put the Titans back on top 26-25 by halftime.

Once again Crested Butte lost their way temporarily in the third quarter as the Vikings rebuilt a six-point lead but they recovered as Mara Pennie, Ellie Duryea and Pickering all scored to pull the Titans within two points by the end of the third.

Blakeley and Freeman each scored in the fourth quarter but the Titans ran out of gas down the stretch and the Vikings slowly pulled away for the 48-39 win. Pickering finished the game with a team-leading 14 points followed by Blakeley with 13.

“We need to become the team that fully expects to be on top at the buzzer,” says Amanda.

Crested Butte had a shot at redemption three nights later when they hosted the Gunnison Cowboys on Friday, February 11. So did the Cowboys though as Crested Butte beat Gunnison when they faced each other last year.

After erratic work on offense in the first quarter, the Titans calmed down with the ball in the second quarter and paced by several big baskets from Blakeley, the Titans clawed their way back to within five points of Gunnison heading into halftime.

Baskets from Pickering and a steal and assist by Harpel early in the third quarter kept Gunnison close but a run had Gunnison pulling away midway through the third quarter. Freeman closed the third with a massive three pointer and Blakeley opened the fourth with a three pointer to pull the Titans back within five points but Gunnison’s effort on the boards, at the free throw line and on the perimeter would eventually lead to Crested Butte’s demise as the Cowboys closed out the 46-31 win. Blakeley led the team with 18 points while Harpel scored six.

“They put together an inside game and an outside game and they were just hungrier than we were collectively as a team,” says Amanda.

Crested Butte hit the road the next day to face Monte Vista missing two key players to other obligations. Adding to the struggle, Monte Vista is a solid team and it took everything the Titans had just to stay in the game.

Amanda looked to her bench to step into some big roles against a strong opponent and while the Titans fell behind by 20 points at one point, they continued to battle to pull within 11 points before ultimately falling 43-29. Blakeley scored 14 points, Pickering continues to find her shot scoring 10 points and Pennie had her best effort of the season on offense to knock down five points.

“It started out really tough and the girls had every reason not to show up but they just didn’t quit,” says Amanda. “I was able to get some underclassmen on the court and that was huge.”

Crested Butte finishes out the regular season with a road game against Custer County on Friday, February 18 and then play their last home game of the season on Saturday, February 19 when they host South Park at 3:30 p.m.