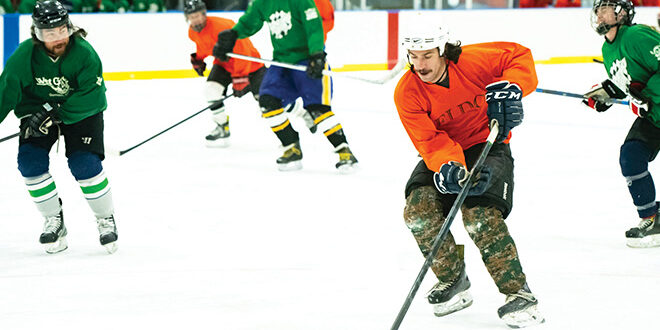 We had blood, we had tempers flare and we nearly had a fight in town league hockey Monday night. Unfortunately, that was in the early game and I went to cover the late game.

You know what you won’t get? Snow. And maybe that’s what led to the heated exchange in the early game Monday night.

Regardless, the Eldo faced off against Ska Brewing in the late game Monday night with both teams bringing a full slate of players and talent to the ice.

Ska Brewing opened the scoring in the fourth minute as Stu Jernigan skated straight to net to beat Hunter Donleavey. As the Eldo continued to struggle defensively, Ska Brewing capitalized again when Donleavey was forced to charge off his line to shut down Joey Otsuka but the puck slipped past Donleavey and Clayton Jernigan was there to guide the puck into the net for a 2-0 Ska Brewing lead.

Then the game changed dramatically. Not only did the pace pick up from a slow chaos, the Eldo picked up their game even more to rattle off the next five goals and Donleavey went from asleep at the wheel to standing on his head in net.

It all started with a massive defensive effort from Connor Sample and Jeff Koether and progressed from there. That and the work of Billy Watson. Watson won a faceoff just outside the Eldo zone and skated past two Ska Brewing players and onto the net to slip a backhand near post.

The Eldo then tied the game in the final minute of the first as Dakota Wiggins skated up the wing and fed Andrea Heilman in the slot for a second Eldo goal.

Two minutes into the second period, Watson and Wiggins connected to put the Eldo on top and after Donleavey shut down Ska Brewing on two golden scoring chances, Watson struck again skating the length of the ice to fire the puck five hole for a 4-2 Eldo lead.

Ryan Carroll looked to spark Ska Brewing back to life with her effort on the wing and behind the net picking up a penalty but Ska Brewing failed to score during the ensuing powerplay.

After killing off the penalty, a bit of bedlam ensued from both teams and, eventually, out of chaos came order in the form of Wiggins, who thrives on chaos, as he took matters into his own hands to skate through the mayhem and score for a 5-2 Eldo lead heading into the third period.

Donleavey continued to stymie the Ska Brewing shooters in the third period making a bid for game MVP and Wiggins and Jack Morgan combined for the Eldo’s sixth goal of the game 45 seconds into the third period.

Clayton did give some life to the Ska Brewing squad during their next powerplay blasting a shot from just inside the blue line but Donleavey proved unaffected by the goal and just kept standing on his head in goal for the Eldo including a flurry of saves down the stretch to secure the 6-3 Eldo win.