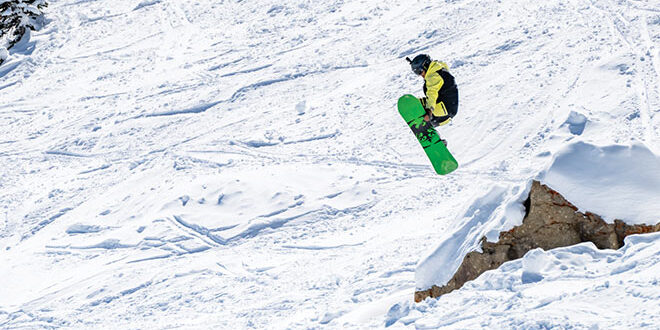 “I owe it all to the salmon”

Competitors were met with great conditions and sunny skies for both the 2* and 3* Freeride World Qualifier events at Crested Butte Mountain Resort Friday and Saturday, February 25-26. Not only that but the venues provided plenty of highlight potential as the 2* was held on the Headwall and the resort offered up Spellbound for the 3* event.

In the end, former Crested Butte Mountain Sports Team athlete and homegrown skier Kye Matlock had the top result among the locals winning the 3* event. Kye is on the freeski competition circuit and returned to his home mountain to defend his title from last year. Fittingly, his mom, Jill Sickels-Matlock, is a four-time freeski competition champion at CBMR events winning in 1994, 1996, 1998 and 1999.

Kye had a plan to jump full time into the circuit all along but it’s an expensive endeavor driving all over the west to compete as well as some time in Canada. As a result, he returned to Alaska for another season of fishing making enough money to make this season’s plan become a reality.

The Freeride World Qualifier Tour has three levels of competitions from 2* events to 4* events and Kye had a dubious start to his season. After placing third at a 2* event at Kicking Horse in Canada he lost a ski during his runs at the 4* events the next week at Revelstoke and back at Kicking Horse.

After a break from the circuit, Kye jumped back in at a 4* event at Snowbird on February 23 which helped get his feet back underneath him.

“I skied tentative at Snowbird just to get a result and ended up 10th,” says Kye.

But, due to a weather delay, he was then forced to drive straight back to Crested Butte in time to register the day before the 3* competition and was on his skis the day of the competition in Spellbound Bowl for one inspection run.

“My first run in Crested Butte after having not been there in months was High Life,” says Kye. “I was surprised with how good the conditions were. When they give you that venue, you have to go in there. I had this dream line in mind but it didn’t go through.”

Fortunately, with CBMR being his home hill and a winning run last year at the 4* event, he had a plan B in place. As a result, he opted to go onto skier’s left ridge of Bamboo Chute and ski around this rock stack and hit a cliff, skied through the trees to the money booter and threw a three, landed it and skied to the finish line.

In the end, Kye’s choice of line and fluidity, all part of the scoring mix, landed him at the top spot and now has him sitting in 13th place in the overall tour standings with his ultimate goal well within reach.

First he has a 4* event in Taos, New Mexico this weekend and then he returns to road warrior mode as the final three main events start at Crystal Mountain in Washington State on March 15.

From there it’s on to Big Sky, Montana for the second of the three final events on March 23 and then, if all goes well, he’s onto the final event at Kirkwood, California on March 31.