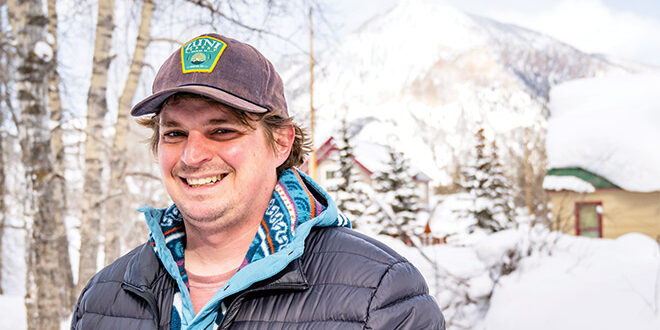 Willy Truettner left Crested Butte after graduating from high school here. Like many bright-eyed youth, he left home to explore the world and pursue his path, but now, 16 years later, he’s returning, and not just coming back, he emphasizes, “We’re moving home and we’re bringing our kid, our beer and our business – were bringing it all.”

Originally Denver born, when his parents split, his father moved to CB in 1999. Willy remained with his mom in Denver. “She gave me my entrepreneurial sense,” he claims. In his sophomore year of high school, Willy felt he needed a change. “It’s easy to lose yourself at Cherry Creek High School.” The solution was to move in with his dad and attend Crested Butte Community School. It was a turning point in his life. His step-grandmother, Shirley Crawford, owned the store Oohs and Ahhs in town. “I learned to ski at CB,” he reminisces. “We’d come up from Denver during breaks.” When his father remarried, the wedding was held at the old Irwin Lodge when Willy was only six. He remembers how cool the lodge and Irwin were back then.

In Denver growing up, Willy played lacrosse and skied as much as possible. Since there was no lacrosse in CB, he signed up for soccer in the fall and then donned the skates for hockey in the winter. “Everyone I was playing with had been on skates since they were five years old. I had skated maybe six times in my life. I went to a skating camp in my junior year to learn a thing or two but there I was, big ol’ me at the end of ice and all the other kids were like five to 10 years old,” he laughs.

Being an outdoorsy youth, he felt that Crested Butte was perfect for him. He muses that his graduating class broke the record with 23 students in 2006. “It definitely took some getting used to, being in a school that small. Everyone knew I was the new kid but it didn’t take long for me to make friends and fit in with the CB vibe and culture. The upside was that I wasn’t anyone’s brother’s best friend.“ He had started working at Lil’s as a diver while he was still in high school, “I was lucky, they let me move into making Dynamo Shrimp.” Willy also worked at both The Last Steep and Marchitelli’s Gourmet Noodle.

After high school graduation, Willy enrolled at Western Washington University in Bellingham. “I went in thinking I wanted to do something with the environment. It was something I was passionate about. I still am. And I started my hobby of homebrewing there.” He explains that his introduction to the craft came at a party where some friends brought their impressive homebrews and for a college student, cost is always a factor. “I realized once I got the set up for brewing, it would cost less to brew at home. I went to Goodwill and got the biggest soup pot I could find, then went to the local homebrew shop to get the rest of the pieces and ingredients for my first batch of beer.” He was pleased with his first concoction but admits, “Looking back now I would probably think it was terrible but as a 19-year-old, it got me drunk and it was a lot better than the Busch Lite I was normally drinking.” He graduated in 2010 with degree in environmental policy and planning.

He kept up his homebrewing hobby when he moved back to Denver. “Some of my friends in Denver wound up homebrewing as well so we had sort of a little club. We’d compare, get drunk, make more beer and play poker.”

Willy landed a position in his field as customer service and dispatch for game wardens with the Colorado Parks and Wildlife in 2011. “If bears broke into houses or there was a fox under someone’s porch, I’d dispatch the wardens. I was there for about a year and even though I got a kick out of it, I started thinking about life, my future and what I really wanted to do, which was to brew beer ultimately, professionally and to make money doing it. I enjoyed making it, drinking it and just the outcome of my hard work.”

Willy began researching the best way to enter the world of the brewing industry and started doing internships in breweries around Denver. When he visited Tommyknocker Brewery in Idaho Springs, the brewer mentioned the excellent Chicago brewing school, Siebel Institute of Technology. “All they do is teach brewing beer. What I really liked about Seibel was their full program which flies you to Munich.” He spent four months in Europe and experienced other countries while learning the trade – east to Balkans, a five-day hike over the Austrian-German border through the Alps and south to Italy, France, Spain and Portugal. “The program was six months, three in Chicago and three in Munich.” At the end of his studies he was awarded a Master Brewers certificate, a highly respected credential in the industry.

His excellent training got him his first brewing job. “Bell’s Brewing was going through an expansion at the time and they hired me as a brewer.” Willy picked up and moved to Kalamazoo, Michigan, where Bell’s is brewed. “It was fun because they also hired two of my friends from school. We got a house together, worked together, became basically bros from another mother. They’re still my best friends.” He was there until 2014. “The winters were dark and cold and I was over those brutal winters of Kalamazoo.”

Willy grabbed the opportunity to return to the sunny winters of Colorado and work with New Belgium Brewery in Fort Collins, the makers of Fat Tire beer, among other brews. He was hired from 300 applicants. He liked their involvement in community and the environment. “I mean, brewing isn’t the most environmentally sustainable thing, but we all want beer. If you’re going to make it, there are ways to do it right, to use less water, energy and ingredients and minimize raw material usage. There are always ways to use less.”

Willy had met and dated Theresa Snyder back in his CB high school days, but they went their separate ways in college. Through Facebook, the high school sweethearts reconnected in 2013 while Willy was in Kalamazoo and Theresa was teaching English in China. “We met up in Denver and I gave her a ride back up to CB for the Fourth of July,” he tells of the homecoming. They had a week of reacquainting before Willy returned to Michigan. “That summer, she came to Michigan for a few weeks and that sealed the deal,” he grins. They returned to their jobs, met up to travel through Thailand and made life plans for the future. Theresa then moved to Fort Collins, where they lived and worked for two years. “My goal, our goal, was to open our own brewery. And that’s what we did,” says the entrepreneur brewer.

In 2017 they opened Zuni Street Brewing Company in the Highlands in Denver, and they’re celebrating the brewery’s five-year anniversary this month with a party, live music and of course, beer. ”Since things were going so well in Denver, we were looking for the next thing, then COVID threw a wrench into our plans, to a degree, but not as bad as one might think. March, April and May of 2020 were our worst months but then we reopened in June and it was the best month we’ve ever had.”

Their next-big-thing thoughts turned back to their home, Crested Butte. “It didn’t make a lot of sense at first to move a brewery to the end of the road, but we did want to do a mountain brewery because it was unique and cool. Typically, if one location is doing well, you move it to another location in the same populous area. It’s a lot easier to manage another brewery in the same area. But we didn’t want to do what everyone else in Denver was doing. Instead of opening a second facility that’s purely production, we figured let’s open a facility that’s large enough to not only do production, but also a taproom. We’ll be putting beer in cans in CB eventually,” he says.

They bought property for their Zuni West Brewery and Taproom at the end of 2020 in the CB South commercial district after looking across the state for property. They chose CB South because, Willy says, “We realized that’s where all the locals are and they want and deserve another place to go enjoy themselves, to drink beer and not have to fight the crowds in town. We finally have our building permit and plan to break ground this spring.”

Willy feels like this will be the ultimate homecoming when they move into their home in CB South in mid-March, returning to the place he and Theresa essentially grew up. “We’re excited to raise our daughter in Crested Butte and that she will get to live the life that Theresa got to live her whole life here and I got to experience for a while. There’s a lot of love and excitement and good vibes. It’s humbling. We’ve been on this adventurous whirlwind life and coming back is like a full circle, it’s a cool feeling.”