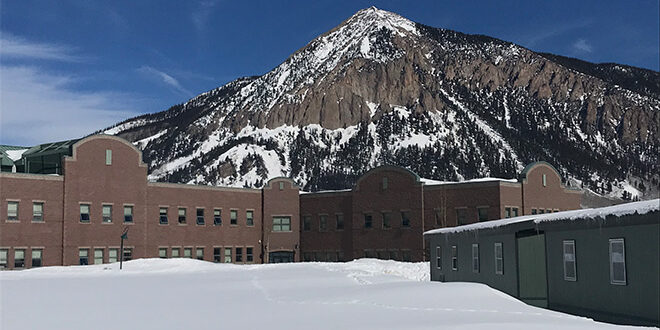 But price tag has gone up to $89 million

The Gunnison Watershed School District has been reprioritizing its scope for facility improvements and expansion, and during a February 28 work session the school board reviewed the initial reworked scope and updated price tag. Due to inflation and rising supply chain costs, the initial estimate for a bond this November could be as much as $89 million, up from last year’s potential $83 million bond that was ultimately not pursued.

Last year, the board decided against the $83 million bond for the facilities expansion based on community feedback, with the intention of reevaluating the project’s priorities and costs for a potential bond issue on this year’s ballot instead. During the Monday meeting, board president Tyler Martineau shared that due to inflation and supply chain costs, last year’s $83 million bond updated for 2022 has risen 20% to $103 million.

He noted, “If we had passed the bond last year, we would be facing the updated cost of the bond this year. We would be 20% short if we were trying to build this year. It’s a very difficult situation.”

Taking the input received from the community surveys issued last summer, as well as internal feedback, the refined scope ranks priorities for the district’s building improvements on a scale of 1-3, with 1 being the highest priority of needs. Capacity, safety and maintenance improvements all ranked in the priority 1 category.

The options have been split between Plan A and Plan B, with Plan A including priority 1 and 2 categories and Plan B only including the priority 1 category. Martineau noted that this is just the initial reprioritization and the categories can still be reworked.

Plan A’s total project cost comes to approximately $98 million, for a bond referendum of $89 million. The annual tax increase per $500K of residence actual value would be $140.39, and $585.80 per $500K of business actual value. Breaking down the total proposed project expenditures between the north and south valley, 56% would go to Crested Butte and 44% to Gunnison.

For Crested Butte Community School, the price tag of improvements for Plan A is about $55 million and for Plan B $48 million, with almost $39 million dedicated to classroom expansion for both scenarios. “The big elephant in the room of course is the classroom additions needed,” said Martineau. The upgrades also include expanding the common areas like the multipurpose room and creating two separate, secure entrances to the building for the secondary and elementary schools.

The Gunnison Community School’s biggest improvements for both plans involve security, maintenance and sustainability upgrades. “It’s the most inefficient building energy use-wise in the district,” said Martineau. “Something needs to be done with that.”

Community feedback revealed that adding synthetic turf, restrooms and stands to the Gunnison field was not a high priority, so the expansion has been reduced to only creating two fields from the existing field. “The need is there to have at least two functional basic fields to operate,” said superintendent Dr. Leslie Nichols, noting Gunnison’s recent soccer team addition.

“I like the methodology as far as prioritization and taking into account the survey results,” said board treasurer Dave Taylor.

However, he questioned the numbers. “We’re looking to spend $100 million. I have questioned the process we have been using to put together these estimates. My understanding from the experts I have been in contact with is you do not have an architect driving this process,” he said, referring to RTA Architects who put together the project scope. “Issuing a bond and developing a school is a contractor-driven process. You develop a relationship with a contactor and you’re much more able to firm up the cost of the project without contingency numbers involved. I strongly encourage us to get a second opinion on how this process works and another definition of the cost we’re looking at.”

“That’s fair,” said Martineau. “These numbers all tie directly back line by line to the cost estimate that was prepared by the architects last year. Let’s follow up on that.”

“The roof in Crested Butte would be included in that. The reality is that as buildings age in school districts there are pieces of maintenance that we simply do not have the funding to keep up with over time, roof and boilers being great examples,” said Nichols. “Our facilities team does a great job keeping up but at the same time the financing of school districts does not allow us to expand as necessary when we need to, and does not allow us to keep up with big ticket items as we need to.” Martineau also noted that the maintenance was more preventative to avoid problems down the road.

Martineau said that a steering committee is working on the whole process leading up to the election, and Nichols is setting up a series of meetings this month for teacher, administration and community input. Martineau noted that there will also be an advocacy committee and the district will be reaching back out to the original task force of community leaders that shared their input last year. The goal is to finalize a plan the board wants to pursue by April, and make a final decision on whether to go forward with an election by August.

“One of the things we’re looking for is are these the right priorities that have been assigned so that we come up with a plan that folks feel they want to support,” said Martineau. “What should be in and what should be out is really important.”

He concluded, “This is just a start. It gives us a place to work from.”