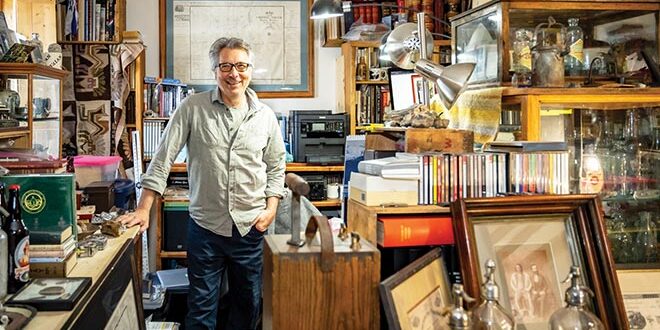 Brian Levine started skiing on equipment that would now be considered very collectible vintage. “When I was just a little schmuck,” he elaborates, “I remember whining about putting on those leather ski boots. I started getting motion sickness problems so didn’t ski enough to get good at it. If I hadn’t gotten motion sick I probably would have moved to Aspen but I moved to Crested Butte,” he says happily.

Now, as he has done for decades, he is a historian and an avid collector and seller of antiquities. “We have thousands and thousands of historical artifacts,” some of which he just won’t part with.

His advice to those would-be collectors comes from his many years in the biz, ”Don’t buy anything that you don’t want to die with. In other words, it’s all about what makes you happy, what reflects who you are.” For example, he explains, “If you go buy a Beanie Baby because everyone tells you that’s what to buy, when the music stops, all you have left is the Beanie Baby.”

Brian is a fourth generation Denverite who can remember when Monaco was a dirt road south of the intersection of Jewel. His father was a salesman who sold everything and anything. “He sold electric sinks that had blenders and other appliances attached and then went on to sell jacuzzis.” Back in those days as kid, Brian reminisces about his family outings into the mountains where other people were scarce. “They took us into old towns like Central City when Highway 6 was the only way up.” When they did go skiing, it was up over Berthoud Pass in a bus with the ski club, hitting the rope tows in those stiff leather ski boots.

Brian recalls his notable high school acclaim, “There was a drive-in movie down the block and I had a Rambler classic where the seats came all the way down, so I was really popular with the dates,” he laughs. Aside from the dating distraction, he was a serious academic student. “I was into science. I took Latin and Hebrew and one of my favorite things was quantum physics. I like the astounding ideas but you can’t understand it without the math,” which he confesses he wasn’t great at. He graduated in 1973.

He enrolled at the University of Colorado-Boulder, initially in a pre-med program but there was a wonderful array of distractions in Boulder during that era. “The problem was I got interested in modern music. The Beatles changed everything but then Bowie and Queen came in. It was all too much fun. I suddenly lost seriousness after being a straight A student. I was writing lyrics for bands that were going nowhere. It went from bad poetry to bad lyrics,” and although he was writing those lyrics, “I was associated with bands but not in them. It was goofiness, when you hadn’t grown up yet,” and he also suspects, “I’m not sure I’ve grown up yet.”

Brian feels it was a lost period of time for him, but he turned his bad poetry into novels. However, he says, “I got a lot of rejection slips.” He traded science classes for English studies. ”The turning point was picking up Scott Fitzgerald and the 1920 expatriots.” He graduated in 1977 and got more involved with his writing. “I mutated once again after graduation. I went back up to Cripple Creek where my parents had taken me as a child to see Melodrama at the Imperial Hotel and the gold mining, so remembering as a child, I cut from work just to take a ride out of town. It was fall, and there was gold leaves, romanticism and nostalgia.”

In his truancy from work that day, Brian also went to Victor, a small town near Cripple Creek, where he discovered the antique shop Ye Old Bottle Shop and saw things that intrigued him. It would change his life path. “A Hutchison soda bottle, hand blown glass, with a slug-plate of the ‘Union Bottling Works Victor Colorado.’ I felt the antiquity of it, the bubbles in the glass, and it was a heavy bottle. It was so different, it was like reaching back into the past. You think about some miner or resident of Victor who once held it,” and that first sale is said to have created the monster, he laughs. “I kept going back there and became one of her best customers.”

He was hooked on Cripple Creek history and antiques and wrote six books on the subject. Brian obsessed with first edition books, stalking the shelves of Denver used bookstores searching for Hemingway, Fitzgerald and Ben Hecht, while amassing a sizable collection of antiques. He volunteered with the Victor historical museum to create the Lowell Thomas room, since they already had many items from his life. It’s now called the Victor Lowell Thomas Museum. Brian then researched Lowell Thomas in Victor and wrote a book about his findings (Lowell Thomas’ Victor). He was so entrenched in Victor’s history that he eventually moved to the tiny town of 400 residents in 1983. ”I brought my cats and upped the population to 410. I had quite a few cats,” he grins. He then formed a historical society to initiate preservation. The gold mining had restarted in earnest and it was huge. “The millionaires that came out of the Cripple Creek district, of which Victor was the mining center, ruled Colorado.”

To pay for his collection accumulation habit and living expenses, Brian was a tech writer for CAD-CAM. “I had acquired all these Cripple Creek antiquities, books, papers, bottles, jugs, and I lived in an old historic building in Victor. I was always buying but I had to start selling,” which he reluctantly did to pay his bills. As the assistant curator for the museum, a paid position, Brian just wasn’t making enough to pay for the high overhead of his antique buying.

When gambling came up on the ballot in 1990, historic preservation was the key issues it was supposed to support. He logically surmised that if preservation was the goal, there should be a job for that very position. “And this is when I first got into politics, which I don’t like, but I created the job of historic preservation director for the City of Cripple Creek in 1991. I wrote the preservation ordinances and then the design guidelines for new construction and preservation.” In the five years he had that title, he took the town’s revenue from essentially zero to one million. He then created grant programs awarded to homeowners and businesses who weren’t in the gambling industry and who adhered to the preservation parameters to fix up their historic homes and buildings.

Although there was no political intent, Brian says everything became political, and he became Number One Enemy. “The casino owners interpreted everything we did as political, but we were just going by the guidelines and the ordinances of preservation, and all those things were passed by the town council.” The town bought an historic building, restoring it to house the growing police force but the casino owners thought it should have been for them. After the preservation department secured $150,000 to restore and preserve the incredible gold mining Stock Exchange building, the casino owners got the town council to eliminate Brian’s preservation position. “The gambling community wanted more casinos and didn’t want any restrictions and preservation was being accused of holding up progress.” Brian’s position was eliminated by a pressured council.

Distraught at first, Brian was about to up his antiquity game. “I had to start selling my antiques again. It was enough to float me because this stuff was expensive.” He developed a business in obsolete mining certificates. “They’re historic documents, the companies are long gone.” Brian researched the history behind the certificates and he says it got to be so big that he began writing for a magazine published in London that was dealing with the history of shares and stocks, “There are big auctions for these worldwide,” he says. He began giving speeches on Colorado mining in Germany. “It became quite a thing. It was paying the bills and the artifacts business was growing with early maps, whiskey jugs, hand blown bottles, mining equipment and photos. I started dealing with institutions. I came up with the only known ambrotype tintype on glass of Captain John Williams Gunnison and sold it to the Colorado Historical Society.“

Along the way, he and his brother had bought homes on Mt. CB when they accidentally discovered Crested Butte in ‘93. Brian’s son, Ben had fallen in love with CB when he was only five years old and Brian recalls, “We came one snowy cold winter and we had always wanted to live in a ski area and CB felt like the place.” He moved here permanently in 1998. Brian’s son Ben had moved up with his mom Donna Arwood when he was 10 years old.

Brian had started dating Jackie Bingham when he was still in Cripple Creek. She was living in Scotland, so they’d travel back and forth and to other places as well. He proposed to Jackie in the Sistine Chapel at the Vatican in Rome and in 2000 she relocated to Crested Butte with him.

“We love the mountains here, we could live anywhere but my wife loves it and my son loves it so he visits constantly.” Brian’s collection of Crested Butte artifacts is extensive, from saloon trade tokens to Irwin town ordinances. “I bought out massive collections of Colorado history. I always keep some, my wife thinks I keep too much,” he smiles. “There’s a lot of history here.”