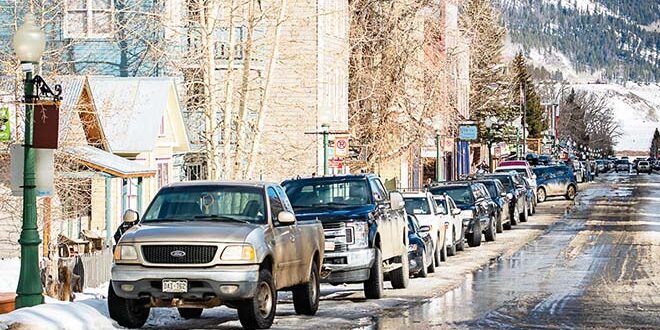 Prioritize permits with residents and spread out the flower boxes

The Crested Butte town council briefly discussed the idea of doing away with permit parking on Sopris and Maroon Avenues but ultimately decided a parking management plan was an inevitable need for Crested Butte’s future, so they voted to retain the plan with a few tweaks.

The time limit for parking on Elk Avenue will remain at two hours and enforcement will end at 8 p.m. A two-hour parking grace period will be allowed in the adjacent neighborhoods of Sopris and Maroon before tickets are issued. Council asked staff to be more liberal with issuing permits and to prioritize the residents in the neighborhoods.

The councilmembers all agreed that parking enforcement company Interstate Parking Inc. had done a great job and was able to manage the enforcement at a much better cost than the town could do itself. The town’s contract with Interstate cost the town $45,000 annually and the company collected another $35,000 in fines. If the town was to do the job itself, there would be a capital cost and it was estimated the net cost to the town would be closer to $154,000.

Community development director Troy Russ said the parking situation had drawn both positive and negative comments and the town and Interstate had pivoted quickly to respond to concerns. One example was allowing the two-hour grace period on Sopris and Maroon this winter that Russ said decreased complaints significantly.

Mayor Ian Billick, a resident of Sopris Avenue, said he preferred a simple plan that allowed house guests to not worry about ticketing when over for a visit.

“What about extending the permit system beyond Maroon and Sopris?” asked councilmember Anna Fenerty.

“I imagine Crested Butte 2050 is when that might be a reality,” quipped councilmember Jason MacMillan. “I don’t have the appetite for that right now.”

Councilmember Mallika Magner threw out the opposite idea. “Do we want neighborhood permits at all?” she asked. “Has anyone else heard the idea to keep the enforcement to two hours on Elk Avenue only? I’ve heard it a lot.”

All the other council representatives agreed they too had heard that suggestion from constituents.

“I think some sort of parking management will be a critical part of the town’s future,” said Billick. “It is important to keep Interstate. If we pull back on the current parking management program, we would have to pick up the cost.”

Fenerty asked Russ what would happen if the town eliminated the neighborhood parking permits and fines. Russ said he felt Maroon and Sopris would be overburdened with vehicles.

“We went through this in Breckenridge,” said councilmember Mona Merrill who owns a coffee shop in Breck. “Interstate was phenomenal. We’re in it and in my opinion we keep them or don’t do anything. I agree we’ll need more parking management in the future and Interstate has been great, so we want them managing it. We’ve gone through it in Breckenridge and it works well there now, probably after two years of growing pains.”

Billick described Interstate personnel as being “flexible and responsive.”

Councilmember Jason MacMillan asked Russ if the initial growing pains and complaints resulted from too few permits being issued.

“That was part of it,” agreed Russ. “We were tight when initially issuing permits until we saw how it went. Change is also a big thing for the community. It’s tough. It is disturbing to a small town feel to get a ticket when empty parking spaces are there in plain sight. We’ve become much more liberal with the number of permits we issue.”

Merrill wanted to make sure permits were issued to pretty much anyone who needed them. Magner agreed and councilmember Beth Goldstone emphasized that residents should be prioritized. “If a resident needs more permits, be generous,” agreed councilmember Chris Haver.

“Employees of Elk Avenue businesses park on those streets and are important as well,” said Fenerty.

“The public parking lots are only a two-minute walk from almost any business on Elk,” said Billick. “So I’ve never understood the problem. I’m comfortable prioritizing the residents.”

Russ confirmed that based on data collected, there is almost always open parking spaces at the First and Elk or the Four-way parking lots.

Council unanimously agreed to continue the parking management program basically under current rules but with a priority for making sure neighborhood residents are prioritized for permits so as not to make living in the area a burden.

Traffic calming boxes will be placed on Whiterock Avenue to mitigate expected additional traffic from CDOT’s U.S. 50 construction in Little Blue Canyon. Russ postulated that the two-way traffic flow of Elk Avenue would mitigate the need for traffic calming boxes along Maroon and Sopris Avenues. Instead, staff will be conducting speed studies throughout town and will prioritize the use of the remaining flower boxes based on the highest needs.

“I am sure not everyone will be happy with this decision but we’ll do our best to make it work,” concluded Billick.