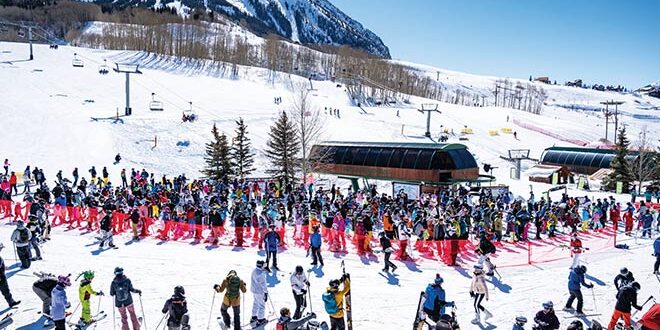 20—That will be the minimum wage for employees starting at Vail Resorts next season. The ski company felt a ton of public pressure this winter over its general operations. That bump will mean a $5/hour raise for the lowest paid CBMR employee so that should start to make a difference. Rumor has it VR is hiring former Buttian Jeremy Rubingh (who initiated a viral petition calling out Vail Resorts) to start a campaign saying how great the company is now.

4— The number of dead Christmas trees I saw lying around in various snowbanks on a morning walk this week. Rumor has it Chad wants to turn it all into an Easter fire celebration that includes not only wayward Christmas trees but the tons of plastic teeth flossers seen in every parking lot around town.

20— The number of years Dan and Brian ran the Brick Oven. That tenure ends this season and on April 1 they will celebrate their two-decade anniversary of slinging pizza and beer. Which is where the rumor comes in – the rumor of course being that the Brick (now owned by the Mark Walter group) will not be open this summer. Again, no one will confirm or deny that because that’s the way it is now…I’ll continue to make the public offer to sit down with Mark and offer a forum for him to share his vision but the phone isn’t exactly ringing off the hook.

248— The number of cars I counted Monday morning coming into town from the Clark’s stop sign, up the hill, past the PAWS building and to the Riverbend turnoff. They weren’t stopped but they were in the 10 mph mode. Rumor has it the CB town council wants to simply divert them all to the Brush Creek parcel and teach those pilgrims how to walk to the ski area. No cars in town!

10.7—The number in millions of dollars to extend water and sewer out to the Whetstone affordable housing property from town. Rumor has it that would make the owners of the ranch across from Riverbend extremely happy as they could then tap into the line and sell thousands of sweet lots.

14.4—The number in millions of dollars Mark Walter apparently paid for 10 empty lots in the Kapushion subdivision. That’s some expensive dirt that those living in town will notice when the property tax valuations are redone. Rumor has it…well there’s a lot of rumors about what he wants and what he plans but I haven’t talked to him so who knows? Of course, the offer remains to sit down and chat and let him share his vision with the community members of the community he is buying up at pretty fast clip.

111—The snowpack average in inches we are at with the Gunnison Basin. That’s pretty good since it’s above average but we need a wet spring to refill the rivers, reservoirs and aquifers. Rumor has it the wildfire danger will continue to be extreme this summer as the forecast is calling for continued drought…but we can always hope.

83—The number in millions of dollars for the new lower end school district bond idea. The priority district need is obviously more classroom space for a bursting at the seams Crested Butte school that will cost somewhere in the $40-$50 million range. The next need is safety and energy efficiency improvements. The debate is always whether both ends of the valley can come together to pay for needs without having to bribe the other end of the valley with some wants. Personally, I’d rather pay for real needs and keep my property tax hike as low as possible…but that will be a debate to have for the next several months.

6,000—The peak number of daily spring break visitors projected by the Chamber. This coming weekend it looks to be closer to 5,000 a day and rumor has it the Frangers will be back in force for the last two weekends.

1—The first of the Great Blue Herons has returned to the Slate River Rookery this week. That is a real joy to know and it is incumbent on all of us to treat their home with respect so they aren’t pushed out by too many people making too much noise as they try to start their little heron families here at high altitude. Unlike the spring break tourist numbers, the heron numbers usually peak in May.

Not enough—Restaurants. It’s not just a problem this busy period but it’s happened all season. The restaurant scene is on an edge as major ownership turnover is having an impact along with a workforce shortage, which is also indicated by the shortage of affordable places to live near people’s work—especially in the North Valley. It just feels like our tourist infrastructure is starting to not meet the demand and the local eateries are a major red light that’s flashing that message. Long waits don’t make anyone, the customers or the businesses, happy. Poor experiences result in poor attitudes…

Too many—Too many people seem too agro at the moment. Maybe it’s a COVID hangover combined with a busy week of spring break, but too many tempers are short, too many drivers are speeding in too many places and there just feels like there’s too much general entitlement and attitude flowing through the valley right now. It’s never too soon to take too many deep breaths!

0—The number of phone calls I’ve received from Mark Walter. And that’s his perogative but we’re here to help.

3—As in April 3, the last day of the ski season for CBMR or 3 weeks left in the lift-served ski season. Monarch just extended its season to April 17 and Aspen is now going until April 24. Rumor has it pretty much everyone in this valley is ready for the end and pretty happy the 3rd is when we move from chairlifts to backcountry skiing and biking.