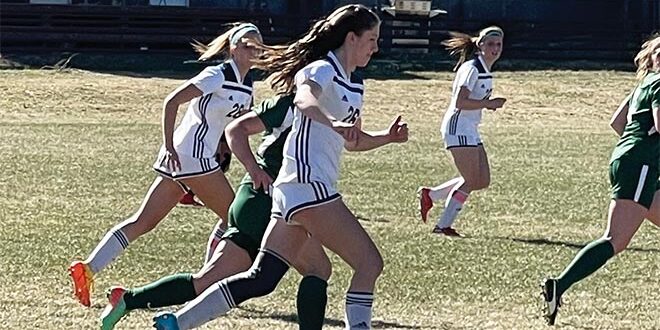 The week started off with Del Norte on Tuesday, April 5. Del Norte was a solid team when they joined the league a couple of years ago but are in a bit of a tailspin, so coach Heather Culley lined out some goals for the team against Del Norte to continue working on aspects of their attack. The Titans built a 5-0 lead by halftime and continued to pour it on in the second half rolling to an 11-1 win.

“For Del Norte we wanted to work on making better runs up at the top and trying to not be caught offside constantly,” explains Culley. “They did great, we had a few goals that came off of great runs up top.”

The Titans then readied for a league showdown with the Ridgway Demons on Friday, April 8. Ridgway was sitting in second place and appeared a tough opponent for the Titans, a welcome challenge after a series of easy wins.

“Going into the Ridgway game we knew they are usually pretty good competition and that Telluride had beaten them 2-0,” says Culley.

Fortunately, Culley and the team had some insight on the Demons’ game and looked to exploit that in their match.

“Watching a little of their game against Rifle the Tuesday before gave us some insight into their outside mids not dropping back onto D, and their center mids were pretty good,” says Culley.

The Titans looked to dictate play in the opening minutes of the game pushing Ridgway back onto their heels with an aggressive attack. The early effort paid off as the Titans took an early 1-0 lead off a goal from Maddie Bogard. Bogard scored again in the 30th minute and the Titans carried a 2-0 lead into halftime.

“We started off strong against Ridgway,” says Culley. “We were making runs, passing out to the sides, and putting a lot of pressure on their keeper. We talked to the forwards about trying to get out and get a goal early in the game.”

The Titans then ramped things up in the second half to rattle off four more goals. Leigh Harpel and Campbell Ryan each found the back off the net and Ellie O’Neal tacked on two more to seal the 6-0 win.

“We kept pushing when Ridgway was showing some fatigue,” says Culley. “We also like to set goals before the game, and it’s a running list on a white board that I write every game. We asked them to individually and as a team be able to check all of those off at the end of the game. Which they 100% can say they did in both halves.”

The Titans return to non-league play as they have a game on the road against Colorado Springs Christian and then host Alamosa on Thursday, April 14 at Katy O. Rady field on the Western campus. Kickoff is at 4 p.m.

“I’m pretty excited to see them against Colorado Springs Christian, we don’t know much about them, but their record seems like a solid team,” says Culley. “We finish out the week with Alamosa at home! Every game they impress us, it’s the little things that are all starting to occur more often and turning into bigger things, which the girls are starting to also see.”