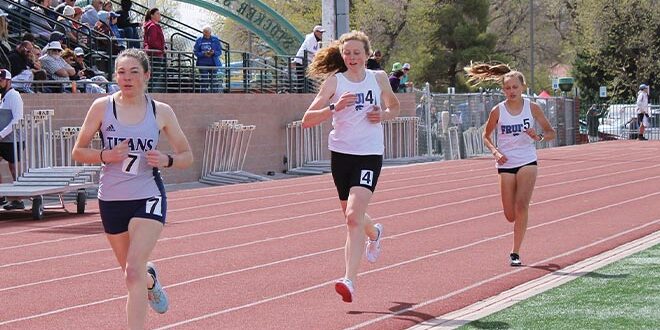 Titans track returns to Grand Junction for another test

After weeks of illness, injury and a spate of standardized testing, the Crested Butte Titans track team was near full strength when they headed to the Frank Woodburn Invitational in Grand Junction on Saturday, April 9 and continued their work to dial things in with the post season on the near horizon.

“We were playing with a full deck and they did not disappoint,” says coach Christa Meilak.

The biggest improvement came from the relay teams as Meilak and the coaches were able to put together relay teams for both the girls and boys and look to have the rosters set for each event.

“We focused on relays at practice and they crushed it,” says Meilak.

On the boys’ side, the addition of Kenny and Sam Bullock helped Meilak to fill out some relay teams for Grand Junction in the 4×200-meter and the 4×400-meter relays with the 4×400-meter team of Sam Bullock, Kenny Bullock, Jake Pendy and Curtis Timothy cracking the top 10 to take ninth place.

“Hand-offs were beautiful and the teams were solid,” says Meilak.

Jake stepped into the 1,600-meter individual race as well and ran his way to a 10th place surrounded by juniors and seniors.

Sister Ruby Pendy proved she’s not just a 2A standout in distance events as she lined up against runners from much bigger programs to take fourth in both the 800-meter and 1,600-meter runs.

“Ruby and Jake are holding their own against those bigger schools,” says Meilak. ”It’s really good for us to have this type of competition and it doesn’t seem to faze any of them at all.”

Merck continued to progress in the high jump with her effort in Grand Junction pushing her even closer to making the cut for the state championships.

“Samantha is right on the fence for making state in the high jump,” says Meilak.

Overall, Meilak feels her athletes are right where they need to be and they’re seeing the results of their hard work.

“They work super hard and it’s starting to pay off,” says Meilak. “We’re small but we’re mighty. We have such a great array of talent.”

The Titans now head into the April break and Meilak is looking at it as an opportunity for some much-needed rest before they head into the home stretch of the season and look to qualify for the 2A state championships.

“If we keep it up and keep conditioning up, we’ll have a crew going to state,” says Meilak. “It’ll be real fun to see what happens after break.”