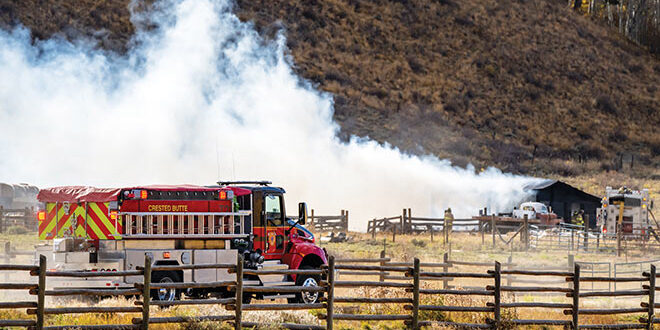 Frustration building on all sides

The combination of quickly escalating labor and material prices combined with a quickly shrinking timeframe to obtain all the entitlements needed to start construction on a new Crested Butte Fire Protection District (CBFPD) campus in the Slate River subdivision located off of Gothic Road is resulting in a major hurdle for the project that was hoped to start this summer. Add to that some crossed wires about what information the Crested Butte town council was asking from the fire district and its architects, on top of an intergovernmental agreement (IGA) that currently requires affordable housing as part of any first phase of development and you have a bundle of frustration.

That frustration was voiced from all sides at a CBFPD board meeting Tuesday night when fire district board members and representatives of both the town of Crested Butte and CB Search and Rescue listened to the architects and construction company explain how a project originally expected to cost less than $24 million is now projected to cost more than $28 million, and that’s if costs stop increasing and doesn’t include all the expenditures associated with the proposal.

District voters approved a bond issue to fund the project last November. The district was able to secure just more than $30 million. The latest proposed campus includes a 30,650 square foot fire station headquarters, a 10,193 square foot search-and-rescue building and a fourplex for workforce housing. In order to fit everything on the site given to the town by the Aperture developers, the fire district has a contract to purchase approximately two acres of Spann Ranch property contingent to the town. But that land is not yet annexed into Crested Butte. The town will transfer its property to the fire district for free after certain conditions outlined in an IGA are met and BOZAR approves the development plan. In an effort to speed up the approval process, the town planning department is running review and approval processes for the proposed annexation and BOZAR design review in tandem as much as possible.

Todd Goulding of Goulding Development Advisors said that while every project is expected to rise in price between the early design phase and construction, he normally includes a contingency amount to address that issue. “What we’ve seen with this project however is unprecedented price escalation,” he said citing a monthly increase in costs of about 1.5% or more. “At the moment we are sitting on at least $28 million in hard construction costs and that’s on top of the soft costs.”

CBFPD chief executive officer Sean Caffrey said soft costs could add another $3 to $4 million to the project for things like the additional land, architecture costs, furniture, equipment, permits and fees. He did say that securing the bond in 2021 made the interest rate more attractive than it would be today.

“The price escalation has been extreme and unpredictable,” agreed Mike Potter of FCI Construction out of Grand Junction. He said before 2020 the expected price escalation was about 3% per year while this was tracking closer to 18%.

“The other challenge with Crested Butte is there is not a lot of subcontractors in or close to the site that could do the work. So a lot would have to come from places like Delta or Grand Junction,” he said. “The market is very saturated with work right now so skilled labor and materials are scarce. Everyone is so busy there is no need for a worker to go far away for a job because they don’t need to.”

On top of the general price escalation, the latest designs also included some additions that increased the price. The Search and Rescue building grew by more than 1,000 square feet and more solar panels and EV charging station infrastructure were included. The hard number on needed site work also added more than $1 million. Goulding indicated the approximately $30 million budget could hold for another four or so months with the newly dramatic price escalation percentage baked in.

“As for timing, we need the town council to approve the conceptual annexation at the May 2 or May 16 meeting,” said Goulding. “We go to BOZAR in late May and June and then have to apply for a building permit. The road map is tight.”

Goulding said the original BOZAR submittal did not include the fourplex for workforce housing, but town community development director Troy Russ said that element was required to be part of the first phase of construction under the IGA signed by the town and fire district. Goulding said he resubmitted the plans with the fourplex but said one option to help with cost and timing might be for the fire district to suggest to the town amending the IGA to take out that housing requirement.

At its March meeting the council told fire district representatives it wanted the district to show how the current design compared to the 2021 building codes the town was in the process of adopting. Councilmembers wanted to see an analytical comparison and be shown how aggressive the building’s design was being in terms of sustainability.

“Not in totality,” said Goulding who added that his team was not yet working on that analysis. “That would cost us three or four months,” he noted.

“The council was clear they want to see a comparison of the 2021 code standards to what you are proposing,” said Russ. “They don’t want a comparison with the 2015 code. The council would be frustrated with that information.”

“Our point of mutual frustration is that we will lose the construction season to do it. Considering the price escalations, we are struggling toward some happy medium,” said Caffrey who estimated every day was costing the project about $10,000.

“I agree it is a frustrating spot right now,” said district board member Eric Tunkey.

Board member Tina Kempin said the town staff suggested the council would perhaps be satisfied with a project that was certified LEED 4.0 Silver.

“Our design team is telling us that will take more time too,” said Goulding. “Getting to Silver LEED (Leadership in Energy and Environmental Design) status requires getting to 50 points and we think we will have about 45 points. One way to get to 50 is to write checks for carbon offsets. That’s what Vail’s fire station did.”

“Or you could build your building better,” suggested citizen Donny Davol who was attending the meeting.

“The current code calls for a building this size to be LEED certified. The staff is suggesting the LEED Silver as a possible path forward,” explained Russ.

“The problem right now is we can’t afford all three buildings as designed,” summarized Caffrey. ”It’s more like one-and-a-half to two buildings. And we can’t get BOZAR approval without solving all the issues.”

“The annexation concept approval gets you to BOZAR and then the annexation will take time,” said Russ. “And you need that completed before you can get a building permit.”

“Will something else pop up in July?” asked McCann. “What’s next?”

“The council has not indicated to staff there would be additional things, but this is a negotiated process,” said Crested Butte town manager Dara MacDonald.

“This is all a legislative action,” said Russ. “There will be public hearings. Things could change. The public could make a compelling argument at the hearings that haven’t happened yet and the council could adjust to that. There are still a lot of variables.”

Kemble Widmer of Search and Rescue admitted there was a “tough confluence of events” and he appreciated the fire district providing an opportunity for the S-and-R but said he was ready to sharpen his pencil to help whittle down the expenses. He said he could see some design elements being deleted or deferred. He emphasized the current Search and Rescue building brings risks to the team so he did not want the campus opportunity to fade away.

“Maybe we reduce the size and eliminate certain noncritical features,” he said. “We can look at what might be subject to cutting and deferring.”

The fire district retreated into what was expected to be a long closed door executive session to discuss how they wanted to proceed with negotiations from their end.

The expectation is that they will present alternatives to the town council at the May 2 meeting.

Share
Previous Titans track returns to Grand Junction for another test
Next Is the ‘new normal’ to be here for the mud?