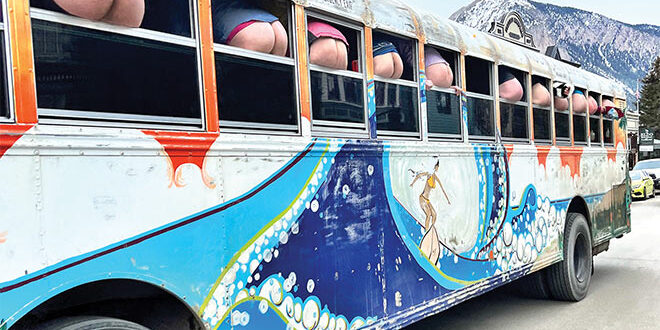 The moon bus, trails and a pain in the…

I briefly entertained the idea of just putting a couple of the ‘moon bus’ photos on page 2 and calling it good. The iconic Crested Butte last day of the ski season tradition sort of sums up much of the CB attitude: irreverent, a little raw, insulting to some, funny to others. While I would no longer be shocked if some Tucker Carlson-type newcomer tried to file a police report over the incident or have the town ban such pornographic displays, the late afternoon Sunday moon bus lived on this past weekend. That is one sign of hope that not everything has transitioned to gentrified high-end resort blandness. The moon bus is a local’s sign of transition that the ski season is over and it is time to move to spring, the quiet off-season and eventually biking and hiking.

Last fall and into the early 2021-22 ski season we had a good ‘flip the switch’ transition. We were able to ride bikes into November and then just a few days later move to riding boards on the ski area. The same light switch transition is happening now and that is one of the blessings of our valley.

CBMR ended the ski season last weekend with costumes and pond skims and still good snow on the steeps. There was Flauschink, the GT, historical pub crawls, snowblades taming Rambo, sunshine, soft snow and DeadHead Ed’s birthday party. There was some tiredness enhanced by low pressure and obvious feelings of big picture changes happening too quickly to CB, but it was a good finale.

And then Gunnison Trails announced on Monday that many Hartman Rocks bike trails were opening. Thank you. For those that prefer the links to the rocks, Dos Rios opened Saturday.

For a place that embraces the outdoors, such a transition is gold. I’ve always said that Hartman’s is the off-season secret treasure. My friends that like golf say the same about Dos. When it is cold and wet in the North Valley (and Tuesday’s windy rain-snow mix was one to test the soul) the west side of Gunni can be dry and warm. The Hartman trails in the spring offer early season flow that will remain buried beneath snow and mud for many more weeks around Crested Butte.

The 30-mile trek from the Four-way is easy and represents a primary valley artery linking the two communities. While getting a tad more expensive given current gas prices, it is still worth the trip. Of course, there is a responsibility that comes with using the place. There is still some snow and mud on some of the trails and bikers and hikers should follow the protocols that protect the early season trails. Gunnison Trails basically recommends you be cool, respect others, slow down and go through muddy spots instead of around them. That is good advice any time of the year in most any situation.

Some of the trails will stay closed into the middle of May no matter how dry they are in order to protect the Gunnison Sage Grouse. Let them mate in peace! That too is a responsibility that comes with using those public lands. We have an obligation to protect all our neighbors including the wildlife.

Business transitions this time of year are not unusual. Some move locations, others close, new ideas prepare to come to fruition and open for the first time. That can be an exciting period and while there is more uncertainty than usual this year, which has led to some general community fatigue, such shifts in the spring are somewhat normal. The one transition to spring I’m not a fan of is the Little Blue Canyon Highway 50 road closures between here and Montrose. That too is a much-used artery and the work seems expensive, thoughtless and a stereotypical waste of government money. Straightening that road will encourage faster drivers and save less than a minute of travel time. But right now, for those of us wanting to head west, it is a big pain in the ass — which in some minds touches a similar theme, but is the opposite of the annual moon bus. Get it?

Look, the spring transitions are part of our cycle here. Off-season snow for example, is meant to weed out the posers. Despite some transitions I’d rather not see, so far just a few days after the ski lifts stopped spinning it appears we are blessed with the switch being flipped. There is still backcountry skiing to be had but for many, the attitude has flipped from skinning slush to pedaling dirt. It seems the right move.

See you on the trails…