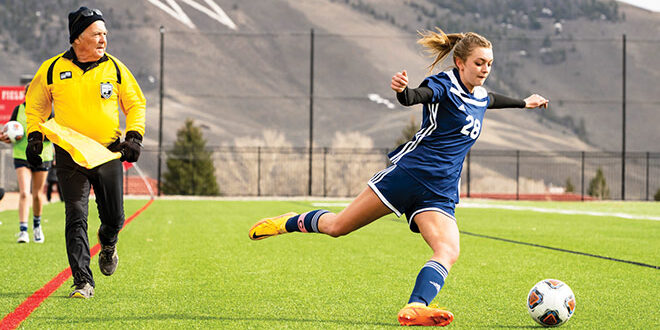 It was setting up to be a great week of soccer for the Crested Butte Titans girls soccer team as they had a couple of non-league 3A games on tap after cruising to a couple of easy wins. The week was meant to kick off on Tuesday, April 12 as the Titans were scheduled to face Colorado Springs Christian, a quality program on the Front Range that is in the midst of a successful season.

Unfortunately, the morning of the game as the Titans were set to head to Colorado Springs, the game was cancelled leaving the team without a chance to get a glimpse of the bigger soccer world in the state.

“We wanted to play and measure ourselves against a good 3A team,” says assistant coach Tom Lewis. “It would have been a good test.”

The Titans then turned their attention to their next 3A challenge, the Alamosa Mean Moose, on Thursday, April 14. While perhaps not the same level as Colorado Springs Christian, Alamosa had the potential to test the Titans as well as they are a larger 3A program from outside the Titans’ 2A Southwest league.

“We had no clue what to expect,” says Lewis. “Based on some of their scores from other games we figured it would be a relatively competitive game.”

Crested Butte opened the game at Western Colorado University’s Katy O. Rady field at a pace unmatched by the Mean Moose. The work of the Titans’ midfield opened several early opportunities on net as both Maddie Bogard and Sophia Righeto broke free to the goal only to get denied by the Mean Moose goalkeeper.

Alamosa’s defense remained pinned and battled hard to chase down multiple through balls to the Titans strikers, but Crested Butte continued to fire off shots yet still struggled to find the back of the net.

The Titans’ effort eventually bore fruit as Leigh Harpel found room at the top of the 18-yard box and fired a shot past the outstretched arms of the Alamosa keeper for a 1-0 lead. Crested Butte continued to press Alamosa but were stuck with a one-goal advantage at halftime as their shots continued to miss the mark.

“It’s been clicking the last few games, we were just attacking,” says Lewis. “Leigh, Grace (Bogard) and Ellie (O’Neal) had so much time and space in the midfield that it gave the strikers and wingers time to find space as well. The girls were disappointed at halftime that it wasn’t more than 1-0.”

The Mean Moose came out at the start of the second half a much different team and turned their game on the offensive. While they found some success with the ball as they attacked, the back line and goalkeeper Mara Pennie held off the initial Alamosa surge.

“Alamosa was more intent to go forward but I thought our defense and Mara did great and remained composed,” says Lewis.

Following a somewhat frantic opening 10 minutes from the Titans, they settled back into their game and took back possession and stepped up the pace of their play. The effort set up several more chances for the Titans and Harpel scored once again with another blast from distance in the 60th minute for a 2-0 Titans’ lead.

Crested Butte then finished it off in the 74th minute as a run from Paloma Lamar up the flank set the ball inside the 18-yard box for O’Neal. O’Neal took a touch to set up her shot but was fouled drawing a penalty kick for the Titans. Harpel converted the penalty kick to complete the hat trick sealing the 3-0 win for the Titans.

“I was super happy with how they played,” says Lewis. “They’re doing what we’ve been asking them to do and it’s becoming more consistent.”

The Titans will take the next week off from games and workouts as the school goes on their April break but return to workouts on Monday, April 25 and then host Ridgway in Gunnison on Wednesday, April 27.