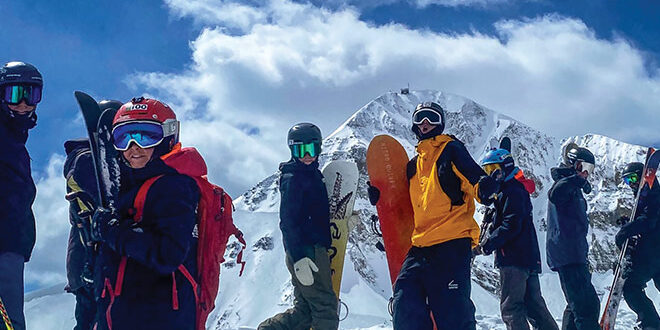 “There’s a lot of commitment from the kids, they’re passionate and the foundation is there”

Ten CBMST athletes made the cut for NorAms with their results at regional competitions throughout the winter and seven of the 10 skiers and snowboarders decided to make the trip to the big show and see how they stacked up against their age group peers from throughout North America.

Athletes faced challenging conditions at Big Sky as a relatively low snow winter had organizers forced to make the most of what they could with their terrain.

“It was fine, just a short venue with three tiers of cliffs and a variety of options,” says CBMST coach Mark Robbins. “Small compared to other NorAm venues in the past.”

The competition kicked off with the 12-14-year-old age group on Thursday, April 7 and the athletes had a mix of a firm but carvy snow surface.

Snowboarder Teagan Turner led the charge for the CBMST on day one as she posted a second place finish among the girls to qualify for the finals while Nolan Gardiner missed the cut among the snowboarding boys.

Brooks Miller led the way for the CBMST skiers as he finished the day in 15th place out of the field of 55 skiers. Wyatt Cook earned himself a spot in the finals as well as he placed 27th but the remaining CBMST skiers Liam Hadley and Sam Anderson didn’t make the cut for the finals.

The next day the 15-18-year-old age group took to the mountain and organizers opened more terrain for the older kids while temperatures started to climb close to 60-degrees. The temperatures had athletes managing slush as the day wore on and the lone CBMST skier in the age group, Marin Gardner, did what needed to be done to make the cut for the finals setting the stage for four CBMST athletes; Turner, Miller, Cook and Gardner, to compete on the finals day.

Unfortunately, temperatures dropped to 20 degrees that night and when organizers and ski patrollers inspected the venue, it was deemed unfit for a competition.

“A patroller said, ‘it’s unedgeable and opening it would be unethical,’ so they cancelled the finals day and stuck with results from the first days of competition,” says Robbins.

As a result, Turner was the lone CBMST athlete to step up on the podium taking second place at NorAms and first place in the overall series standings.

“The level of competition is insane,” says Robbins. “Kids from Canada and Tahoe tend to go huge and part of that is where they’re coming from. Where we really shine is our technical skiing. For us it was about lining up features for a good line score.”

The NorAms wrapped up what was a very successful season for the CBMST as the program had more skiers and snowboarders involved than any year prior and the future is bright for the young team.

“We’re really happy with where the kids are in their skiing and riding,” says Robbins. “The key now is being versatile, so our focus next year is getting more comfortable with bigger features. There’s a lot of commitment from the kids, they’re passionate and the foundation is there.”