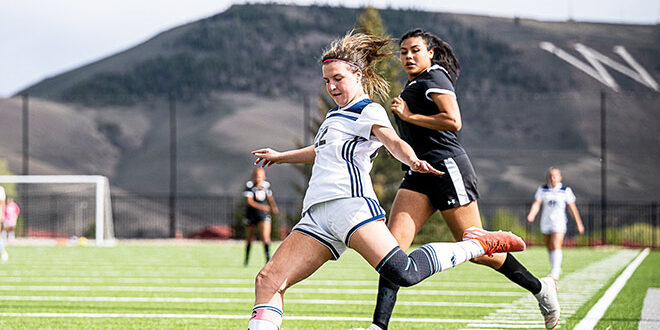 “I am through the roof, I am so excited”

The Crested Butte Titans girls’ soccer team took down the Lamar Savages 4-0 in the 2A state semifinal game Monday, May 23 at Katy O. Rady Field sending them to the finals for the first time in the team’s brief history of existence and proving, once again, that offense scores goals, but defense wins games.

Nerves were rising among the Titans players given their match up with Lamar. The Savages had taken down Telluride 3-0 in the state quarterfinals and Crested Butte lost both games to Telluride during the regular season. Nevertheless, the Titans had also pulled off a massive upset over Fountain Valley and were only gaining steam as the season continued.

Additional insight into Lamar’s game helped to quash some of the nerves as Lamar looked like a lot of opponents the Titans had beaten all season and the Titans were set for their semifinal showdown.

“We knew their right mid was one of their main players and knew they liked to take shots from outside the 18,” says head coach Heather Culley. “We just stuck with our game plan and let Paloma and our outside mids know.”

Despite having a quality plan in place, nerves still welled up in the Titan players in the opening minutes of the game as they looked to play long hopeful passes up field rather than their typical possession-based style. Fortunately, the Titans’ back four of Cassidy Wirsing, Sawyer Ezzell, Paloma Lamar and Harper Andrews remained solid. Teagan Turner battled on the defensive end of the midfield and goalie Mara Pennie came up with a big save early on.

“They stayed in their shape, didn’t let much past and adjusted well,” says Culley.

After both teams got open looks on net early, the game settled down and the Titans started to return to the game they typically play finding success on the flanks.

“As a team I think we came out a little frantic but once we settled down, we figured out how to play around them,” says senior captain Campbell Ryan. “We started playing it to feet instead of booting it up field.”

Both Ryan and Morgan Feltus found massive space on the outside and the Titans’ play wide paid off in the 20th minute. Leigh Harpel pushed the ball outside to Feltus and after carrying the ball up the flank, Feltus crossed it low into the 18-yard box and Maddie Bogard tipped it past the Lamar keeper and slotted the ball into the open net for a 1-0 lead.

Lamar continued to look to the long pass for success, but the Titans defense had things sewn up tight and Crested Butte carried their one-goal advantage into halftime.

“We didn’t want to change anything going into the second half,” says Culley. “We just talked about being first to the ball every single time.”

The Savages turned up the heat at the start of the second half, but Crested Butte hung on through the first five minutes and then went back to work to take back control of the game. They were awarded a penalty kick five minutes into the second half, but the attempt pinged off the post. While that may rattle most teams, Crested Butte remained in control and continued to pepper shots at the Lamar net.

The Titans jumped ahead 2-0 when Ellie O’Neal flicked a ball through Lamar’s defense and Sophia Righeto outran everyone to poke it past the Lamar goalie. Two minutes later the Titans struck again when Harpel stripped the ball off a player and threaded her way through two Lamar defenders to push her shot to the corner for a 3-0 lead.

Lamar continued to look for long passes to make things happen on offense, but the Titans were on every single ball following Culley’s instructions to get to everything first. As time wore on, Lamar continued to wear down and the Titans put the finishing touches on the game as Ryan crossed the ball to Bogard and Bogard tucked it into the net for her second goal of the game and capping the 4-0 win.

“I am through the roof, I am so excited,” says Ryan.

“We were so excited to be there and we wanted it,” adds Culley.

The Titans faced Dawson in the state championship game Wednesday, May 25, the same school that has knocked the Titans out of the tournament in the semis twice before. By the time this hits the stands, the 2A champion will have already been crowned. Let’s hope the third time is the charm against Dawson and we have more great news next week.

Share
Previous School district teachers expected to get 9% pay increase
Next School’s out for Stephanie Niemi: