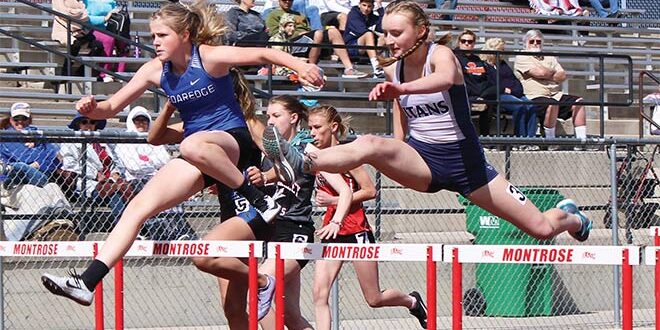 Shake off the break with meet in Montrose

After a week off from workouts, it appears as if the Crested Butte Titans track team hasn’t lost a step as they jumped back into the competition fray at the Montrose Invitational on Friday, April 29 and continued to rattle off personal records (PR) and post some podium results.

The Titans opened the week of practices prior to the Montrose meet almost near full strength and based on videos from over the break, nearly everyone was looking forward to their return to track season.

“We had most of our kids back right away which was exciting,” says coach Shari Sullivan-Marshall. “The break was a time to heal and rest for some and we had a lot of them do some sort of activity during their break. There were some kids that were super active.”

Nineteen Titans made the trip to the meet in Montrose, allowing the coaching staff to continue with their late season efforts to prepare for the final weeks of the season and the post season.

“We were able to get relays in and focus on being more specific with their races,” says Sullivan-Marshall.

Junior Ruby Pendy had the top individual result among the Titans as she ran to a sixth-place finish in the mile and Sullivan-Marshall was encouraged by the work of the entire distance crew.

“They all raced well and were pretty strategic,” says Sullivan-Marshall. “We also saw a few things, such as pacing, that we still need to work on.”

Senior Hayes Freeman had a breakthrough performance in the long jump. While her jumps have been clean in practices, she has yet to put three together at a meet. In Montrose, not only did she land three clean jumps, but also set a new PR to finish in sixth place as well. Freshman Sam Bullock appeared rested after the break as well as he set a PR in the high jump.

The relays have been a big part of the Titans’ development the past couple of weeks and that continues to pay off as well. A crew of boys jumped into the only sprint medley relay event of the season and finished seventh. Meanwhile, the girls 4×800-meter relay team continues to climb the 2A state rankings as freshman Mandala Covey-Bleiberg, seniors Katie and Piper O’Neill and Pendy combined to drop 13 seconds of the previous best time and place fifth in Montrose and have now moved into a comfortable spot to qualify for the 2A state championships.

The sprinters posted a slew of PRs as well and while their results among the bigger programs may not stand out, their times did for the coaching staff.

“Most sprinters set a PR and it was fun to see the sprinters celebrate the success of their work,” says Sullivan-Marshall.

The Titans return to the smaller pond in their next race as they head to Del Norte on Thursday, May 5 for a league meet where they will face their 2A and 1A peers.

The Titans finish the regular season with a meet in Monte Vista on Friday, May 13 providing one last chance for kids to punch their tickets to the 2A state championships.

“We have a lot of people on the bubble for state,” says Sullivan-Marshall. ”We could take anywhere from five to 10 to state.”