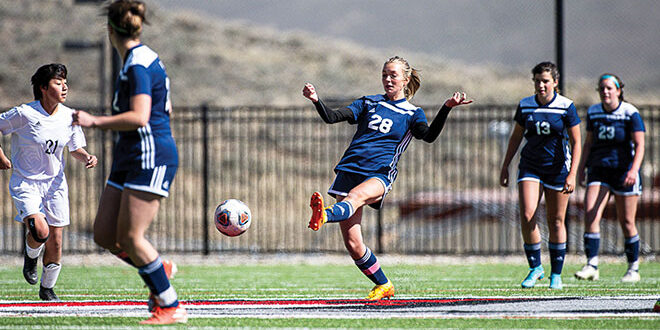 Despite having a week off from action, the Crested Butte Titans girls soccer team picked right back up where they left off with wins last week over Ridgway and Pagosa Springs to improve to 7-4 overall, 4-1 in league play.

The school’s April break can have a debilitating effect on sports programs but also offers athletes a chance to rest and recover and based on what coach Heather Culley saw in the team’s first practice after the break, the Titans were ready to be back in action.

“They were all so happy to be back,” says Culley. “You could tell at practice on Monday they were ready to be there.”

That energy carried into their game against the Ridgway Demons on Wednesday, April 27 as Crested Butte took control of the game from the opening kickoff.

“We had them running in circles the first 15-20 minutes of the game,” says Culley.

While Crested Butte was in complete control, goals were hard to come by at first, but they eventually broke the seal to take a 3-1 lead by halftime.

The work of the Titans eventually wore the Demons down over the course of the second half as Crested Butte scored four more goals to win 7-1. Maddie Bogard scored six goals in the game with Ellie O’Neal tacking on one as well.

The Titans returned to Katy O. Rady field on Friday, April 29 to host the Pagosa Springs Pirates for some non-league opposition and continued their possession oriented playing ways leaving the Pirates scrambling to shut the Titans down. Fortunately for Pagosa, they have a standout goalkeeper and her efforts in net, and the Titans’ propensity for shooting at the keeper, held the Titans scoreless through the first 30 minutes of the game.

“I think we were in control for most of it, but our midfielders weren’t really in sync,” says Culley. “And their goalie was good.”

Despite the possession advantage, the Titans let the guard down for one brief moment and the Pirates seized on their lone opportunity to score and take a 1-0 lead.

“We got caught sleeping and one of our players kept theirs onside,” says Culley. “It exposed something we need to try and correct.”

The lead lasted all of about two minutes though as Morgan made another run down the flank with the ball and drove straight to the near post to then find Bogard open at the top of the six-yard box and Bogard scored to tie the game 1-1 going into halftime.

Crested Butte continued on the attack at the start of the second half, but Pagosa’s keeper was on point turning away numerous shots. The Titans finally took the lead in the 62nd minute when Leigh Harpel blasted a left-footed shot past her from 20 yards out. Fourteen minutes later the Titans struck again when Vivian White followed on a save by the Pagosa keeper to smash the ball in ultimately capping the 3-1 win for the Titans.

The Titans finish the regular season this week with a couple easy opponents and one rematch with Telluride on Thursday, May 5 at Katy O. Rady field on the Western campus. Telluride beat Crested Butte 5-0 earlier in the season but it’s a new Titans team now. Kick-off for the Telluride match is at 4:30 p.m. The Titans are guaranteed a spot in the post season and the 2A state tournament kicks off Friday, May 13.

“We’re looking to beat Telluride and finish the season strong,” says Culley. “I think we’re getting better every game. If we stay out of our own heads, we’ll be good.”